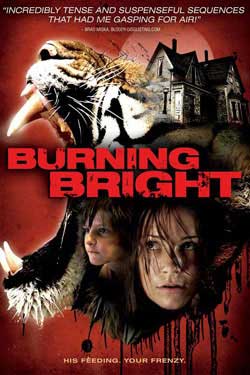 QUICK FIX:
So, this douchebag with a get-rich-quick scheme attempts to swindle THE Meat Loaf out of a retired circus tiger in order to start his own local safari thingy, right?  Right.  But as we all know by now, The Loaf would do anything for love, but he won’t do that.  So what does he do?  He of course transforms this cuddly tiger into a flesh-craving monster…nice!  But wait, there’s more.  Much more.

Scheming D-Bag also steals money from B.J. McKay’s daughter.  Money that she was going to use to send her autistic brother into a special care home so that she can finally go off to college.  Still want more?  Okay, here you go – she wakes up the next morning to find that said former cute and cuddly now ravenously hungry tiger is roaming through the house.  Oh, and did I mention that Scheming D-Bag also boarded up the entire house from the outside to protect it from a hurricane?  Talk about a bad f*cking day…

RAMBLINGS:
I talk a lot of sh*t in my reviews about horror movies that are rated PG-13.  Yes, I have had my reasons in the past, but I’m starting to feel as though I’m becoming more lenient in my older age.  The main reason is that with all the remakes and TV shows being turned into movies (few good, most sh*t) that are littering the screens at our local multiplexes these days, even a direct to video store shelves PG-13 release deserves not just my attention, but all of ours.

Why?  Because it gives hope to all of us – not just to those of us who want to be paid writers someday who have stuff floating around in the offices of the City of Angels waiting patiently for some low-level lackey to read our original scripts before shredding them in favor of greenlighting the casting of Dane Cook as Dr. Johnny Fever in a WKRP IN CINCINNATI remake – but also to the fans in general, of course.  It gives all horror fans a chance to see something original on the screen.  Whether it’s our TV screens or not – it’s still an original flick, and it deserves at least one shot.  There, sermon is over.  For now…

Anyway, I must take off my brand new Lakers Championship cap and salute director Carlos Brooks for crafting such a tensely suspenseful little movie here.  I wish I could describe just one scene for you, but I don’t want to give anything away here.  He stayed away from showing us very much blood at all, but the way he layered the tension and showed us little glimpses of sadistic cunning in the tiger’s constant hunt actually gave me shivers, which doesn’t happen very often I can tell you.

Acting-wise, my next ex-wife, the gorgeous and talented Miss Evigan, brought everything with her and threw it out there for us to revel in.  I’ve always been a huge fan of her father’s work, and you can tell with her work that talent definitely runs in the family.  Garret Dillahunt, most recently seen as fellow burned and psychotic spy Simon in BURN NOTICE, plays Johnny the Scheming Douchebag with all the menace and flair that I’ve come to expect from his work – I LOVE this dude!!  Charlie Tahan as the autistic brother that Evigan has to haul all over the place to keep from being the tiger’s next meal pulls off his role to a T – he’s going to be one to watch out for as he gets older, mark my words.

LAST WORDS:
With everything I described up above that’s going on plot-wise, you might be led to believe that there’s too much going on here to keep track of or that a few loose ends might be left wide open – not the case here…surprisingly and pleasingly enough, almost everything pays off in spades in the end.  BURNING BRIGHT is not a remake or a former TV show – it’s an original thriller that is available everywhere now, and it definitely deserves your attention!!