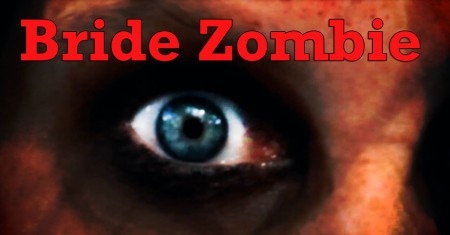 A man doubts whether or not to shoot a zombie – but decides to let her go. But did he make the right choice…?

I typically don’t write about short films, why?  Because they are short for starters so it makes it hard to beef up the review with a filler paragraph about the plot. Also it is really hard to get all types of interesting facts about the movie –cause IF they are on IMDB (and typically they ain’t  there ain’t much happening said IMDB page. So the “short” of it is, this will be a short review.

“Bride Zombie” is simple, quiet and oddly reminds of Bertolucci’s “The Sheltering Sky” in its usage of land scape and very big picture. For starters in an open  field we see our zombie bride half eaten walking towards the road. A man stops his car, debates shooting her and then moves on.

Without giving too much away about the rest of the film –the next 4 minutes at this point, I will say the acting of the two leads is delivered with silent yet solid performances by Starfish and Rob Ceus –who also come through by doing some very nice gore effects. Nothing like seeing a bride and her groom walk off with her intestines over his shoulder.

This is a lush, entertaining film and I look forward to seeing more films from David Van de Weyer who really hit it out of the ball park in five minutes and twenty eight seconds.