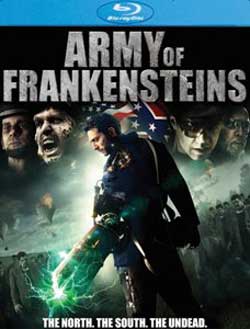 A young man travels back in time, finding himself entrenched in the Civil War with an army of Frankensteins.

Alan is sent back in time via a time machine and becomes involved with a Civil War battle that involves many  creatures of the undead !! These monsters are none other than an ” army of Frankenstein monsters “. Can Alan escape with the help of the Igor ? Or will this be his demise ?

Since this article has to do mainly with low budget horror I would like to take a moment to recognize the passing of one of the true great directors from the low budget horror scene. Today, August 17th 2015, marks the passing of Mr. David Prior a true pioneer in the industry and an original in every sense of the word. When I first started out doing reviews and interviews online I spoke briefly with Mr. Prior on Facebook and had planned on doing an interview with him at some point , he was a very nice and easy going man who truly was dedicated to his fans and the work. Mr. Prior pioneered the low budget straight to video market with Sledgehammer and made one of the best slasher films of all time with Killer Workout. I had nothing but true respect and admiration for the films of David Prior and he will be greatly missed by me and many others, my heart and prayers go out to his family in this sad time. Till we meet again on the other side kind sir.

That brings us to today fun little nugget of low budget silliness, a charming low rent feature titled Army Of Frankenstein that almost feels like a throwback film to the DIY nuggets of the early 90’s and late 80’s. Army of Frankenstein certainly isn’t going to win any awards or become the next classic but for those of you out there who truly appreciate low budget films and can forgive a few minor mishaps there is a lot of fun to be had here in a cheap down and dirty kind of way.

Army Of Frankenstein opens in the early 1800’s on a fog covered battlefield , a soldier runs out of the mist and falls down upon the ground unable to move. A low monstrous growl is heard from far away as the soldier catches a glimpse of a creature emerging from the foggy depth. Behind the monster is what appears to be an entire army of monsters , they move closer and closer to the soldier closing in for the kill….. Cut to present day and we are with our ( very sexy ) hero Alan Jones ( Jordan Farris ) as he tries to tidy up his home and prepare dinner in anticipation of proposing to his longtime girlfriend. Alan is beginning to get irritated waiting for his lady to arrive when he hears a knock at the front door , it is none other than his horny landlord who demands his back rent be paid or sexual favors in lieu of, she also lets Alan know that his girlfriends has been seen kissing up on her mustached boss behind his back. To make a long story short ( and not give all the movie away) Alan ends up broken, sad, and alone; and it is here that he runs into the crazy Dr. Tanner Finski ( an incredible and funny John Ferguson ) and his child assistant Igor ( a very good Christian Bellgardt ).

Unknown to Alan , he is a descendant of a civil war hero and a key to the past. The good Doctor taps into an energy filed using one of his Frankenstein experiments and manages to send Alan and Igor back to the civil war era opening up a hole within the dimensions which pulls in Frankenstein monsters from each time space platform, creating an “army of Frankensteins”. Alan and Igor eventually get mixed up in the fight between north and south and befriend a runaway slave ( Raychelle Mcdonald ) who is fighting for equality for all races and in secret cahoots with a member of the South, she quickly appeals to the main Frankenstein getting him to join the north in their fight for victory. 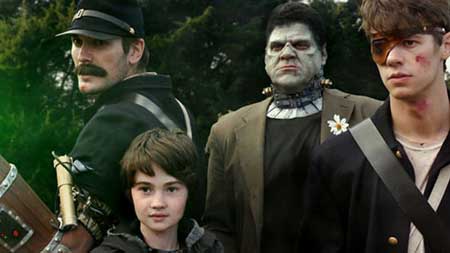 A evil Southern general has also gotten his hands on the serum that raises the undead and begins to create his own brand of evil mutants to fight in combat ( the cat creature is my fav ) by injecting the serum directly into living tissue. The war between the North and the South will be fought with mutant Armies of Frankenstein monsters on a battlefield of carnage and destruction. Who will win ?

I really must say Army Of Frankenstein is very much a charming an fun little movie if weren’t for the moments of gore and carnage this almost feels like those great slimy monster movies I saw as a kid, hell even the gore and creature work is done in an almost whimsical way. That’s exactly the point of a film like Army Of Frankenstein , its not here to be a graphic exercise in excess and debauchery or to be a dark and brooding comment on society and the lack of morals, its just fun plain and simple. It’s been a helluva a long time since horror films had this kind of energy behind them and its  refreshing to see this play across the screen very much in the way films like Night Of The Creeps , Critters , or even Killer Klowns From Outer Space made us all smile in our younger years. The budget might be low but every single nickle and dime is on that screen and the love and admiration that the director has for pure genre films makes this film unlike anything I have seen for a very, very long time.

The cast is pitch perfect here , the standout being the incredible John Ferguson as Dr. Tanner Finski ,every moment he is on the screen is mesmerizing, hilarious ,and even a bit heartfelt. Seriously the man is a powerhouse and one of my favorite performances so far his year. The rest of the cast is uniformly wonderful here not a bad word to be said about one person in the entire cast. I do have to give a shout out to Raychelle Mcdonald as Virginia the liberated slave who is fighting for the equal rights of everyone, she gives tender and sympathetic performance that both enhances and elevates the material. The scene with Virginia and Frankenstein in particular is very effective and one of my favorite scenes in the film, it brings a moment of emotion levity into the fold that helps you to sympathize with both characters and relate to them when danger rears its nasty mutated head.

I really can’t express how much fun I had with Army Of Frankenstein , Ryan Bellgardt may not have directed many films as of yet but if this is any indication of what is to come this is a name that should be on everyone’s ” to watch ” list. Army Of Frankenstein really gives the genre a much needed injection of fun , this is the kind of mushy gushy monster mayhem that echos films such as Monster Squad and others of that ilk. 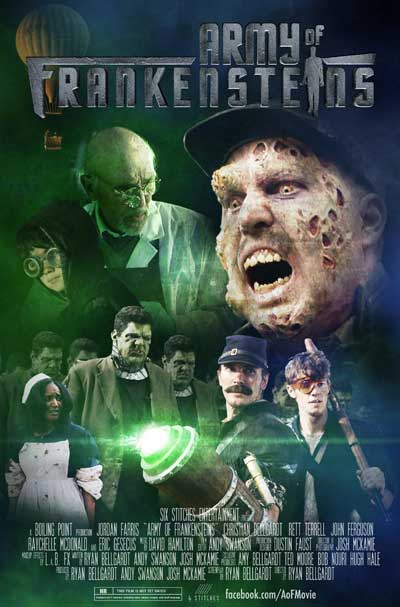 Is it a new low fi monster classic ? I sure as shit say hell yeah, get to this ASAP people !!! Recommended HIGHLY !!!

Army of Frankensteins is now available per Shout Factory 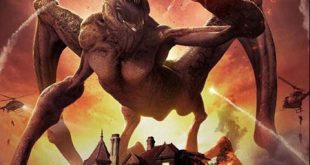