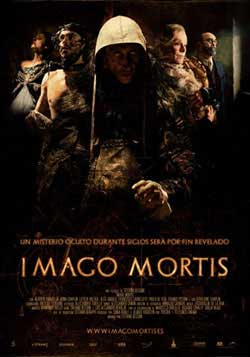 They say that in 1600s, long before the invention of photography, a scientist named Fumagalli, was obsessed with the idea of reproducing images. He discovered that by killing a victim and removing his eyeballs it was possible to reproduce on paper the last image imprinted on the person’s retina. He named such technique “Thanatography”. Today, the same kind of gruesome ritual and abominable crimes recur within the walls of an international school of cinema.

The art of photography is a celebrated venture that many people partake within their lifetimes. From filming life from beginning to end, everyone has their own chance of capturing what life brings on a single piece of paper. In Stefano Bessoni’s “Imago Mortis,” the study of capturing the last image that a human ever sees is discovered through a curious, young film student.

Bruno (Alberto Amarilla) is an aspiring filmmaker at his school of film. He lives in a dorm, where he tiles the wall with self-portraits. After packing a bottle of Absinthe, he goes to see a fellow teacher, Orfeo(Paolo De Vita.) Bruno’s relationship with Orfeo is beneficial, in that he is allowed to get away with things with Orfeo’s support. Bruno is also shown admiring a fellow girl student, Arianna(Ona Chaplin.) Arianna is good friends with Leilou(Leticia Dolera), and is also in the same class. Bruno is also living on his own, due to his family being eliminated in a car crash. He works in the film archive to make what he can to support his way through film school.

He goes to his filmmaking class, being taught by Principal Orlinsky(Alex Angulo), who Bruno refers to as “Caligari.” The class is introducing a project in which each student is given a theme, and they must take a picture of something that represents the theme. Bruno is a fan of the dark and macabre, and chooses to take picture of a dead bird. From the corner of his eye, he sees a young man jump to his death. The seemingly dead corpse then looks up at Bruno, and Bruno is terrified by the apparition when it suddenly disappears.

Bruno is intrigued by a camera he found of Caligari, and goes back to his confident Orfeo for any information he can get. When he goes back to the archive, he sees the apparition of the young corpse pointing to a film on the racks, and is once again terrified. Bruno learns of the hiding place of a big film school secret, and ventures out with Arianna to find out what the “Well of Death” contains. They find a box that harbors a contraption that goes on one’s head and a camera. When Bruno takes a picture of the device for his film class, the professor immediately calls out Bruno and follows him up to his room to get the box back. The box is missing, and the professor demands Bruno find it or he will be expelled from the school.

After teachers and students start to become missing around the school, Bruno starts to suspect that they are using the contraption to kill people. He seeks out professors and workers at the school to explain the origins of the headpiece that gouges eyes out of the unsuspecting victim. After more people start to vanish, Bruno is faced with insult as the teachers think that the traumatic experience of losing his family is aiding his fear of losing people around him. The end result is Bruno learning the truth about the backgrounds of the teachers, and their shady past aligned with the thanatoscope.

The concept of the device was very interesting, as it was able to take a framed picture of the victims’ last visual before death by gouging the eyes out and inserting two steel rods in the brain. The eyes were inserted into a camera, and formed onto a piece of film what the victim saw. “Imago Mortis” had a strong Giallo feel to it, as the young male protagonist courted a beautiful woman while solving the clues to a hoard of disappearances in the film school. The killer, who ends up being one of the students, female and dressed in all black, was definitely influenced from the works of Dario Argento. The costume work was a factor that stood out to me, as everyone dressed very elaborately to their role in the movie.

Stefano Bessoni’s “Imagos Mortis” is a thriller that has an interesting plot revolved around the concept of photographing a human’s very last visual image. The viewer is led through a wild goose chase, along with Bruno on figuring out the mystery of the dark secrets about an Italian film school, and is satisfied with an ending that explains everything.