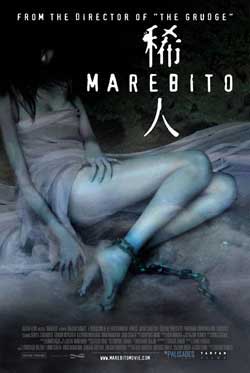 After watching this I was reminded of several different movies. MERMAID IN A MANHOLE , LITTLE SHOP OF HORRORS , and the Mexican vampire film CRONOS. And I have never even seen MERMAID IN A MANHOLE. But in MAREBITO this guy goes down beneath in the bowels of Tokyo and finds a naked young female and takes her home but she’s a mute wild child that starts to wither away until our hero figures out that his pet needs blood to survive. Like a vamp. Thats’ the short of it. The long of it is this.

After the letdown that was NIGHTMARE DTECTIVE and knowing Shinya Tsukamoto was also in MAREBITO but did not direct it I vowed to view MAREBITO with a open mind and heart and not expect …..anything either way out of it. I knew nothing about this film going into it and actually this is a good way to go into any movie watching experience. Most of the time a movie trailer can give away most of the film. Just a film watching tip for you but you probably already….know this….
Anyway MAREBITO begins quietly enough with Shinya Tsukamotos character , Masuoka , in his apartment surrounded by tv screens and video cameras and other bits of useless technology. He is a news camera man and recently filmed the suicide of a man in the subway. The guy plunges a knife into his own orbital socket and while they do show him shove the blade into his own eye there is no close up of the blade puncturing the eyeball or gouts of blood spewing from between his fingers. It is effective though in it’s own simple way.

Masuoka is looking for the reason why the man looks so terrified and wants to discover if the man was stricken with fear because of something he sees or if in his state of horror he was finally able to view something people would not be able to experience in a normal frame of mind. Interesting concept sorta. He also wants to discover the fear inside himself and if he can bring out that terror in another person even if he has to kill to do so! Now that’s dedication.

MAREBITO has a slow and deliberate pace at first and pretty much keeps it through out the duration of the movie. There is virtually no dialogue for the first thirty minutes or so except for the internal monologue of Masuoka. Some people might find this boring but after sitting through probably hundreds of horrid B – movies this wasn’t so bad.

The director of this film is Takashi Shimizu , the man responsible for the JU – ON/GRUDGE series but while it does have some elements of those movies there are many differences. Yeah , low budget and shot in 8 days and with all these constraints he couldn’t make a fright film with all the bells and whistles of JU – ON but you can’t judge it against those films and if you are a fan of his work you should want to give it a chance.

So in his quest for the meaning of fear and blood spilling induced fright Masuoka descends deep into the tunnels beneath Tokyo thought to be a myth. But a myth they are not and down below he encounters a bum and the ghost of the man who killed himself in the subway. If this is his imagination or real , either way together they stroll through the darkened cavernous catacombs and speak of lost underground cities and of the Deros. Deros are a species of humanoid that dwell deep below the earth. Deros stands for Detrimental Robots by the way. This part actually held a certain spooky atmosphere that was conjured up by to actors doing good at their craft and the skillful directorial eye of Takashi Shimizu.

Masuoka continues on and discovers a Deros. A beautiful naked Deros that is chained about the ankle and he does what any guy would do he carts her off to his apartment and keeps her like a pet. She does act like a animal not being able to speak and moving around on all fours , which is pretty disturbing at first. She will not eat or drink anything he tries to give her and it’s not until his finger is cut open that he discovers she needs blood to nourish her. So now he needs blood to keep her going and you know what he needs to do to get her the blood she needs , right? Hell , I would do the same thing to keep this hot piece of ass alive and healthy! Just kiddin’!

But wait. What about the cryptic phone calls telling him he doesn’t know what he has on his hands and doesn’t know how to deal with her? Or the lady that keeps following him around telling him she is his wife and that the deros he has in his apartment is his daughter? Well you gotta watch like I did to find out the answers to these questions.
Now I will take the time to warn you that MAREBITO is not a gorefest. It is not a action horror flick , nor it is a ghostly J – Horror film even though it does have some of those elements , and it is not a dark gothic horror film dripping with atmosphere. So what is it then? It does have the look of a low budget indie flick dealing with one man and the inner demons of his own soul. Maybe? The music is actually befitting of a good scare film and once his female pet starts gulping down blood from a baby bottle and the killings start you know what kind of movie this is. Rest assured this is a genre film but it doesn’t have the flesh shredding and intestine ripping like TOKYO GORE POLICE or MACHINE GIRL.

A big part of MAREBITOS appeal to me is Shinya Tsukamoto. His performance is %75 of what makes this movie good and interesting.. It’s a case of the actor who is not acting that work for him. His face , his eyes , and movements create a dull soulessness that works great for horror movies but makes me wonder ” Is he like this in real life? “. ‘Cause if he is I am glad there is a ocean between us! When he does kill in MAREBITO he does it with a casual boredom and does it so easily that by the time it happens it was rather chilling. I would describe this film as a descent into madness but Masuoka wasn’t very sane to start out with so the trip isn’t that long. And the look on his face at the end of the film is so filled with terror it is another great creepily bizarre , or bizarrely creepy moment of the movie. Whatever the case Shinya Tsukamoto is a gifted film maker and a talented actor.

I don’t want to give the end of the movie away but it does not have a happy ending but I will also tell you that you do get to see the Deros! I thought they were mentioned as an aside or a afterthought never to actually be seen but we do get to see them and that was a nice surprise.

Overall if you are a fan of Shinya Tsukamoto or Takashi Shimizu , Asian cinema , and horror films with a slant towards the indie and art house style of making a movie you will get something out of MAREBITO. I am glad I saw it and that should be enough recommendation. Just don’t expect a gorefest or a special efx extravaganza and you will be okay.