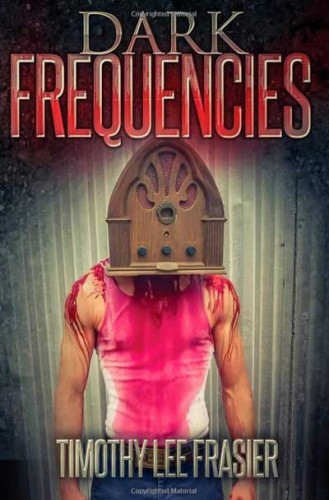 This short horror story collection includes stories about a demonic little girl, the spirit of an evil clown, a zombie apocalypse, a malevolent radio that sends its users to different dimensions, and many others.

I recently met Timothy Lee Frasier at the Providence Literary Festival in Kentucky where we were both guests and thought that he was an all around awesome person. I was lucky enough to get my hands on a copy of his newest short story collection called Dark Frequencies from him and I’m very glad that I did as it is one hell of a great read. I had a lot of trouble putting it down once I started reading it and to be honest I can’t remember the last time that I enjoyed a book so much. I have always been a huge fan of short horror story collections and this one definitely didn’t disappoint me as it delivers on all levels. There’s a little bit of everything here to satisfy every taste and I had a great time reading it from cover to cover in record time. There wasn’t a single story that I wasn’t into and I think that each one is unique in its own way.

Frasier is one hell of a writer who has a kick ass imagination. He does an excellent job of creating some very interesting stores and all of them kept me entertained as I was reading them. The guy is scary talented as a matter of fact and I see a lot of big things for him in the future. I enjoyed his writing immensely and I think that anyone else who reads this book will feel exactly the same way. It’s obvious that he puts his heart and soul into his work and knows exactly what he is doing, something that I can’t say about a lot of horror writers out there right now.

As I said earlier there is a wide variety of different stories in this collection. We get tales about demons, zombies, Nazis, and much more. While some stories are a little better than others I still thought that all of them were pretty damn good for a number of reasons. I really like Frasier’s writing style as he is very good about getting to the point fairly quickly and doesn’t have a lot of filler like some other horror writers tend to do. I love Stephen King but I think that he has a bad habit of rambling on and on (especially in his later works) but Frasier doesn’t do this. His stories are well-thought out and expertly written without going overboard and throwing in elements that aren’t needed.

Even though I dug all of the stories in the book my personal favorite was “Necrofreaks.” It is a great story about a group of poser teenagers who decide to bring a dangerous convict who was recently murdered back to life for their own dark and demented reasons. Of course they soon realize their mistake when the shit hits the fan as a result and that’s when the fun begins. It has a neat little twist concerning one of the teens and the ending is nothing short of brilliant. I also really liked the story “Dark Frequencies” and thought that it was very original and just a fun read in general (especially the end which is so bizarre and out there you can’t help but love it).

Frasier has a knack for creating believable and likable characters as well. I thought that the characters that appeared in all of the stories in the collection were very realistic for the most part (the ones from “Daughter Mine” and “Necessary Cold Ruthlessness” really stood out for me) and I enjoyed the time that I spent with them. In a lot of newer books that I’ve read (and even in some older ones) I’ve noticed that the writers had a lot of trouble successfully developing their characters but that isn’t the case with this book. Frasier does a nice job of creating strong characters (and bringing them to life) and as such I really cared about them and I think that most readers will agree.

Dark Frequencies is a winner and I really enjoyed reading it. I think that Frasier is a wonderful storyteller who has some great ideas and I look forward to checking out some more of his stuff as soon as I can. If you’re in the mood for some great writing and some top-notch horror stories then pick up a copy of this book. You won’t be let down.