Only 13 years old when he began work on Found, young actor Gavin Brown immediately settled into the role of Marty, a boy who discovers some very unusual secret about his family. It’s what he does with this information and what it all leads to that makes Found one of the best horror films of the last decade. He’s since gone on to film two other films and he took a moment to speak to me about how he got into acting, and how easy it was for him to get into character amidst all of the carnage going on all around him on the set of Found.

Horrornews.net: Before I say anything else, I gotta tell you that I saw Found last year at the New York City Horror Film Festival…

Gavin Brown: You did?

HNN: Yeah, and I was one of the judges for the fest. I gotta tell you, we argued over a lot of things when it came time to decide who the winners would be, but we all unanimously agreed that you were going to win the “Best Actor” award. We all thought you and your film, were outstanding.

HNN: So tell me, how did you land the part of Marty?

GB: Actually, I got the part because someone knew my mom and they knew that she was one of the only mom’s that would let her kid act in a movie like this one. 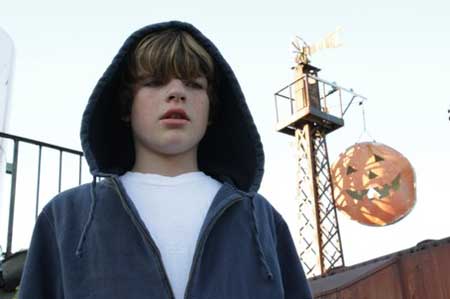 HNN: So your mom is way cool then?

GB: My mom is very cool!

HNN: So you read the script and you saw what your character was going to have to go through…

GB: I read the script awhile after I got the part, I didn’t really look at it.

HNN: So you got the part without reading the script beforehand? Cripes…when you actually read the script and saw what it was all about and what it entailed, did you have any second thoughts?

GB: I thought “This is gonna be a fun movie to make“! The only part that I actually knew about the script was the first few lines, the part about “My brother keeps a human head in his closet?“, that’s all I knew. So basically I knew that it was gonna be kinda screwed up, but I didn’t really know what was actually going to happen.

HNN: That’s heavy! As you were making it, did you still have the sense that you were having fun? You had no problem with the violence whatsoever?

GB: In the real world, I would definitely have problems with it. But I knew it was all fake, so it really didn’t bother me.

HNN: What did your parents think when they saw the finished film?

GB: My mom said, “The only reason I’m watching this is because you’re my son. Otherwise I wouldn’t be here“. 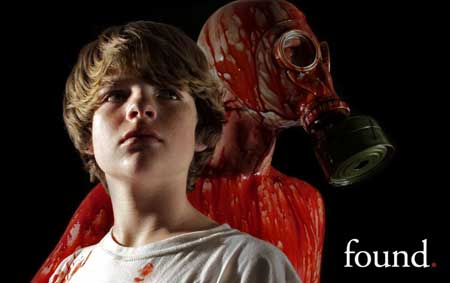 HNN: I was watching it again last night and..

GB: Oh dude, I cannot watch it anymore. I hate it.

HNN: Oh really! Why is that?

HNN: Was there anything that you had to do in the movie that you weren’t crazy about doing?

GB: There was one thing that I didn’t like doing too much, but after doing it, I realized it wasn’t that big of a deal.

HNN: And what would that be?

HNN: So how did you get yourself to cry? How did you bring out those emotions?

GB: Well, one solution was to put Visine in my eyes before every crying scene to make it look like I was crying. On a personal note, I had a rough childhood and I was adopted, so I had to dig down into my younger years and think about the things that made me sad.

HNN: That’s interesting, how old were you when you were adopted?

GB: Well…I was in 7 foster homes before I got adopted.

HNN: How old were you when you made the movie then?

GB: I turned 13 on my first day of shooting.

HNN: There’s a scene where you and your friend, David (Alex Kogin), are watching a really graphic video called “Headless“. I was wondering if the both of you were actually watching the film as you were filming that scene. I mean, it’s obvious that you’re both watching something, but the audience never sees you & the TV in the same shot.

GB: Yeah, we watched both “Deep Dwellers” (Another film Marty rents) and “Headless“. 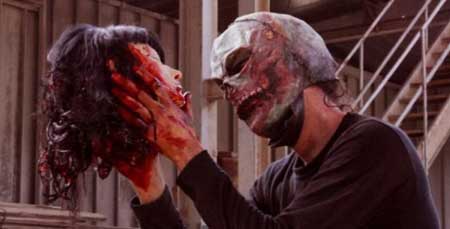 HNN: And what did you think of the violence in Headless?

GB: It was just another slasher movie to me.

HNN: Do you watch a lot of slasher movies?

GB: Honestly, I really don’t watch horror movies much at all.

HNN: What are some of the ones that you have seen?

HNN: Any particular favorite you can think of?

HNN: You really liked that one? I didn’t think too much of it myself.

GB: It was ok. I’m working with someone who helped film the first Insidious film right now.

HNN: Oh really? And what is that film called?

GB: It is not a horror film! I’ve made 3 films total so far, I’ve been in 2 others since Found.

HNN: That was going to be my next question! What have you acted in since then?

GB: Well right now, I’m actually in a film that finishes shooting at the end of August and It’s a coming of age story (Above The Fruited Plains). And I acted in a comedy (The Impersonators).

HNN: So is acting what you want to pursue as a career?

HNN: Did you always want to be an actor or did you get bit by the acting bug while you filmed Found?

GB: Well my mom thought I was kind of creative and I played music too. I always thought I’d end up either making music or acting and my mom thought I’d grow into acting eventually. I never really realized how much I enjoyed acting until I got a little older.

HNN: Well, you are a natural. You have a very natural air about you on screen. Your acting feels so effortless in Found that it seems like you were born to play that role.

GB: It’s weird because I’m in a movie right now & the other actors I’m working with need to take 20-30 minutes to psyche themselves up before shooting a scene, and I can joke around and do whatever I want before I shoot my scenes. When it’s time for me to go to work, I just close my eyes and get into character right away.

HNN: The most powerful scene in Found was that final scene…

GB: Where I was tied up?

HNN: Yes! I can say no more but how did you feel while shooting that scene? It’s so powerful & scary.

GB: I thought it was a lot of fun! I was playing in gallons of fake blood & body parts while fog machines were fogging up the room. One of the reasons Found was so easy for me was because of 3 guys named Damien (Producer Damien Wesner), Arthur (Associate producer Arthur Cullipher) & Shane (Associate Producer Shane Beasley). Scott (Director Scott Schirmer) & Leya (Producer/Director Of Photography Leya Taylor) were great, but those 3 guys wanted to make sure that I had fun while I was on set.

HNN: How long did filming take from beginning to end?

HNN: Wow, that’s a long time for a low budget shoot like this one.

HNN: What was your relationship like with Ethan Philbeck, the actor who played your older brother, Steve? I ask because he was so intense throughout the movie and in a few scenes I could actually see & feel the intensity coming off of him.

GB: We were really good friends! We hung out in L.A. a lot actually.

HNN: Did he ever scare you while filming a scene?

GB: He never scared me, but he shocked me to see he could do what he did. I was never scared, but it was a side of him that I wasn’t used to seeing. And that shocked me.

HNN: How did you get along with the actors playing your parents (Phyllis Munro & Louie Lawless)?

HNN: After you were finished working on Found, how long was it before you got your next part?

GB: About a year or so, maybe a little less than a year actually.

HNN: What are you doing with all of the money that you’re making now? You’re putting it all away, I hope?

GB: I haven’t made any money yet!

HNN: What do you mean, you haven’t made any money??

GB: The money comes in September. I had to wait till Found got a distributor.

HNN: Did it make you nuts while you were waiting? Were you just dying to have Found be seen?

GB: Not really. I knew it was going to be seen eventually!

HNN: Dude, when I saw it last year with an audience and that last line was uttered? The audience just sat there, speechless and stunned. It was like we sat down not knowing what we were about to experience & it just blew us all away. Did you know that the film has been banned in Australia?

GB: Yeah, I laughed out loud when I heard about that!

HNN: What do you think about that decision?

GB: I think Australia has to suck it up and be a man!

HNN: Is there anything lined up for you after you finish your latest film?

GB: I have an agency that takes care of that for me. So I’ll just wait and see what they have in mind for me and go from there.

HNN: Well, I doubt that that’s going to take very long. You’re a fine young actor and you really made a big impression on me & everyone who saw Found at last years NYCHFF. I wish you nothing but the best of luck.

GB: Thanks, That’s very kind of you to say! 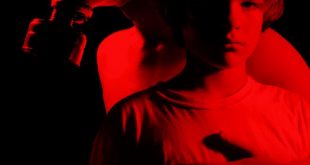