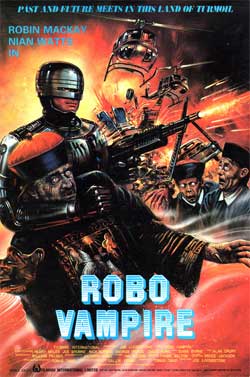 Drug dealing gangsters enter into battle with a narcotics task force; both parties have secret weapons.

You’ve scraped the bottom of the barrel. You’ve scraped, and scraped, and scraped—until you think you can scrape no more. You’ve seen TROLL 2, SINS OF THE FLESHAPOIDS, THEY SAVED HITLER’S BRAIN. You don’t believe it can possibly get any worse. I mean, how could it? How could a movie be more cheap, incoherent, and ludicrous than THEY SAVED HITLER’S BRAIN? 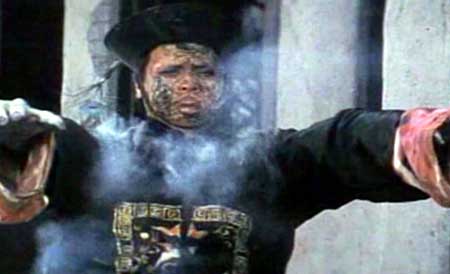 But then . . . you see ROBO VAMPIRE. And it dawns on you: the bottom of the barrel—it’s boundless. Truly boundless.

Jim Wynorski, Fred Olen Ray, and Todd Sheets could get together to hit Charles Band’s EVIL BONG for nine days straight. At the tail end of the ninth day’s toke session, they could be assigned the task of collaborating to invent a movie off the top of their heads . . . ROBO VAMPIRE would still be worse.

But it’s the ideal Kung-Fu movie plot: evil, drug-dealing gangsters pitted against the vice squad. Sounds safe, tried and true, but safe, entertaining . . . only ROBO VAMPIRE has made a few modifications. The evil, drug-dealing gangsters, well, they have enlisted the help of some vampire bodyguards. And the vice squad, it’s—it’s—it’s . . . got a crime-fighting cyborg on its side. Everyone in the film, I must add, is an adept practitioner of martial arts. But I suppose that goes without saying. 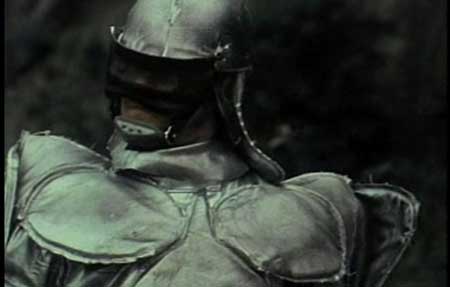 There’s the magical gangster with the power to make vampires appear out of midair. There’s the supposed Italian-American head honcho heroin dealer who has just moved from drug smuggling to body smuggling . . . whatever that means. There’s Sophie, a narcotics agent who gets captured by the bad guys and must endure Chinese water torture. There’s the lead vampire—I think he’s the lead vampire—who runs around in a plastic gorilla mask. And of course our hero, the cyborg avenger, looking like a down-on-his-luck second cousin of the Tin Man, dressed like a helmeted member of Heavy D’s Boyz. 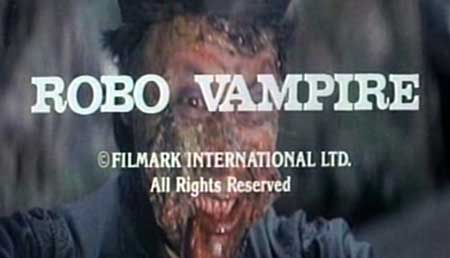 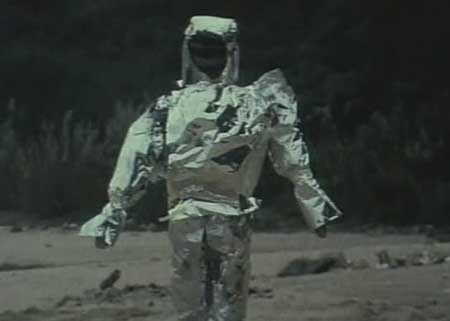 So he’s wearing a child’s homemade Halloween costume? Psshh. His flamethrower is the only thing capable of destroying the vampire bodyguards.
Let’s talk about those vampire bodyguards, shall we? These vamps don’t have fangs. They don’t have capes, live in castles, and—make no mistake—they don’t sparkle in the sunlight, either. Still, any visitor of the bad guys’ hangout is thankful they’re issued garlic necklaces at the entrance. Do they love cigarettes? Of course they do. Can they shoot sparks out of their sleeves? What do you think? And these creatures have a different look to them. It’s a sort of SEVEN SAMURAI meets charred beef stroganoff thing they have going. Truly chilling make-up effects and costume design. The scariest thing about them, though, is that they move only by way of the bunny hop. Hop . . . Hop . . . Hop . . . Hop . . . Terrifying. 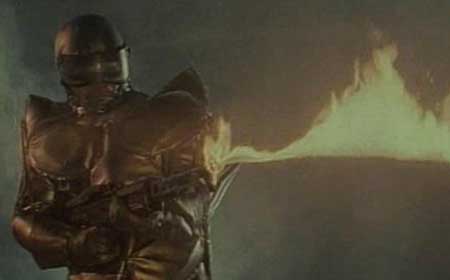 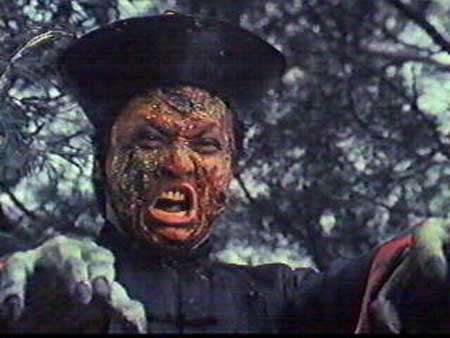 Now, Kung-Fu movies are known for their dazzling voiceover dubbing. They’re second only in quality to GODZILLA films, so—as you may have guessed—ROBO VAMPIRE’S transition to English exudes swan-like grace: not just authentic Hong Kong accents, but Texan, British, Italian, you name it.
And action-packed! My God. The film’s violent tension ceases only for a brief skinny-dipping sequence and the consummation of a marriage between the gorilla-masked lead vampire and his ghost-witch lover (I can see your breasts through whatever that is you’re wearing, lady).
Keep that synthesizer pulsating, Ian Wilson. You’re playing my jam. 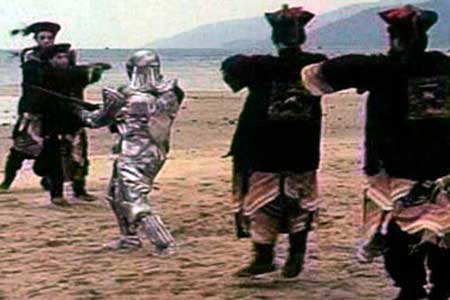 Should you see this flick? Let me explain in the form of haiku:

Terror and action
Alex Murphy roll over
Best movie ever