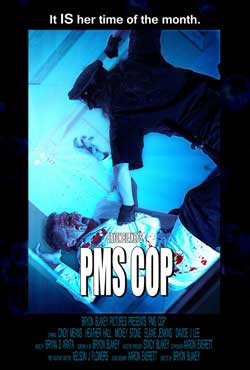 Mary, a police officer, is forced into an evil pharmaceutical company’s drug trial for a PMS inhibitor known as Corybantic after being caught on television beating a rapist. After a tragic event Mary suffers a horrific side effect, and with her new found superhuman strength, she begins to systematically take out her vengeance on everyone in her path! Will Mary fight against her inner urge to destroy or could she become the first of a new secret weapons program designed by an evil corporation?

What you’re about to read are a series of emails between my editor and myself from about 10 days ago. Although the words here aren’t being repeated verbatim, they’re close enough…

Evil Editor: Hey saint! I just got a new review request and I’m forwarding it to you because it sounds like something that’s right up your alley. You interested?
Me: Well…it’s not like I don’t have a slew of other movies I’ve yet to get to boss man. Isn’t there anyone else that can watch this one?
Evil Editor: Come on! You’re my go to guy for all of the important releases. Plus I think you’re really gonna like it…
Me: I’m your go to guy? Really? Wow, I’m flattered to hear that. OK then, if you think that much of me then I’d be glad to watch this film. What’s it called?
Evil Editor: It’s called “PMS Cop”. The story of a cop who suffers from a bad case of PMS so she takes some experimental drugs and turns into a killing machine! You’re gonna love it!
Me: Ummm, that doesn’t sound like something I’d be too interested in watching. What makes you thi..
Evil Editor: What’s that you say? Must be a bad connection or something. Movie is on its way to you right now, enjoy it SUCKER!! MWAHAHAHAHAHAHAHAHAHA….. 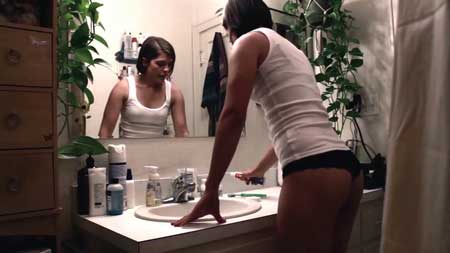 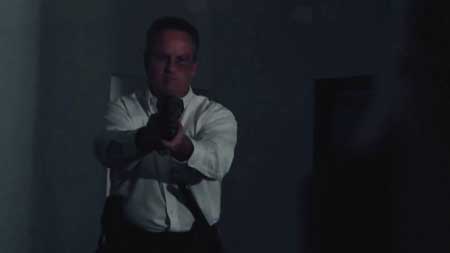 Once again I found myself victimized by my bereft of human decency editor and put myself in a position where I had to watch something I really didn’t wanna watch. But I am a man of my word (& a sucker to boot) so when I received the film I dutifully sat myself down, swigged down some whiskey and pressed “Play”, not knowing what was about to unfold before my eyes. So imagine my surprise when after about 80 or so minutes later I found myself smiling at what I’d just witnessed.

Written & directed by Bryon Blakey, PMS Cop is the story of a cop named Mary (Heather Hall) who after angrily subduing a rapist dressed up as a clown is sent to a psychiatrist to determine the source of all of her anger. It seems that she was being filmed by a news helicopter as she pummeled the rapist and the police department she works for wants to minimize the bad publicity she’s drummed up so she’s sent to get some professional help. The doctor feels that a new experimental drug called Corybantic that inhibits the symptoms of PMS might be able to help her out and (against her better judgement), she agrees to become a guinea pig and take the drug. 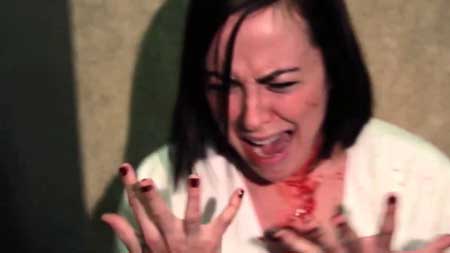 At first it’s quite successful with Mary feeling much more relaxed and not as all out angry at everything she sees while on duty. But while on patrol one afternoon her partner goes into a store to grab himself a drink & is shot down by a masked robber. Something in Mary snaps immediately afterwards and she drives off in search of criminals to apprehend and she runs into a man beating his wife in a car and when she stops them, he becomes belligerent and she promptly rips his lower jaw off – with her bare hands! The doctors monitoring her progress (In addition to the drug, an implant was injected into her), realize that she’s out of control so she’s apprehended and brought back to their facility where she’s to be evaluated. Sensing something is wrong, the young Dr. Sellers (Megan Dehart) wants to remove her from the clinical trial but the older Dr. Sokolov (Elaine Jenkins) wants her to continue using the drug. But for what purpose? If you’ve ever seen films like Lady Terminator (1989) or Eve Of Destruction (1991) then you know where this one is heading. It turns out that Corybantic has some military applications as well and Mary is turning out to be the perfect test subject to test the drug’s efficacy in that regard. Eventually she transforms into the PMS Cop (Cindy Means), who’s taller, stronger and meaner than anyone was prepared for. She then goes on a rampage inside the building in an effort to escape and spread destruction all over the city. 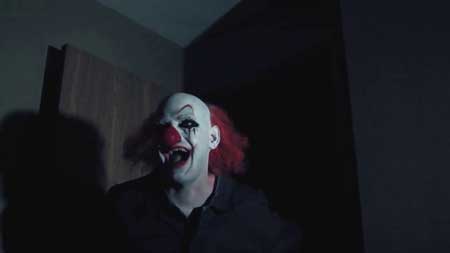 Despite my misgivings, I found a lot that I liked about PMS Cop. The performances are hit or miss but Heather Hall is really appealing as Mary. She’s not a physically imposing woman but her attractiveness is appealing and her toughness & grit come across most effectively. Elaine Jenkins is a hoot as Dr. Sokolov also, with her heavy German accent giving away her true ambitions almost as soon as you hear her speak it’s fun to watch her chew up scenery as she attempts to conceal what she’s really after to everyone else. The script is littered with the usual cast of characters you’d expect to find in a flick like this and as I mentioned earlier the performances are by and large hit or miss but none of them are flat out awful. The makeup EFX aren’t anything to write home about either but when they’re on screen they actually do a decent enough job of revolting the viewer.

The film’s biggest shortcoming (besides its $10,000 budget) is its lack of focus. It initially starts off as a action comedy hybrid but gets increasingly dramatic as it continues and I thought this was a mistake, especially if you’re gonna stick with “PMS Cop” as a title. In an effort to get a tad more serious as it moves ahead, Blakey’s script gets bogged down by adding a lot of minutia from other films that he’s trying to ape. All that does is bog down the proceedings and with all the dull clinical discussion going on at times it felt like the film would never end. 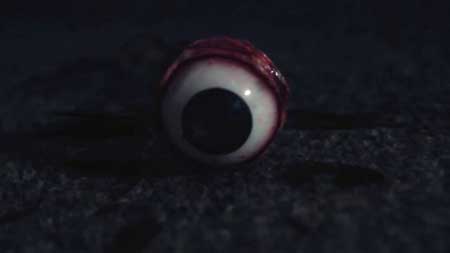 But for a film called “PMS Cop” (A title change wouldn’t be the worst thing to happen here), I have to admit that I was way more entertained than I expected to be. In the end PMS Cop tries really hard to entertain and it mostly succeeds. It even thwarted the plans my evil editor had to bore me to tears with (what he thought to be) a bad movie. But I’m sure he’s gonna redouble his efforts to find me something extra awful to watch next time.

The things I have to do for a paycheck sometimes…