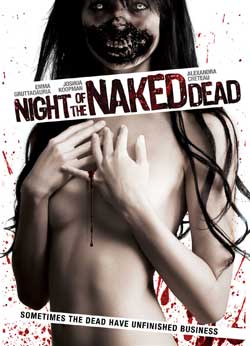 Sometimes the Dead have unfinished business. A storm from hell brings mysterious strangers . . . who come with secrets. Emma is a struggling romance writer. David is a traumatized war veteran struggling with his past and sleeping in his van. They face an evil and terrifying menace as the strangers appear. Veronica arrives naked. Coby has blood on him. Then the Others come. Sex and murder, lust and deadly vengeance make this a night that the romance writer and her new friend will never forget . . . if they survive. Set in an antique house amidst the haunted saltwater marshes of Cape Cod, like the Sixth Sense, the film marries Hitchcock and the paranormal in a tightly plotted thriller.

There’s a reason as to why I used the full IMDB description of Night Of The Naked Dead here. There are those of us who read these descriptions that IMDB posts with each film and if so inclined – we rent/purchase the film based on these descriptions. I dunno who wrote this one but I have to assume that he/she never watched this movie because it’s got NOTHING at all to do with what I watched a little while ago. 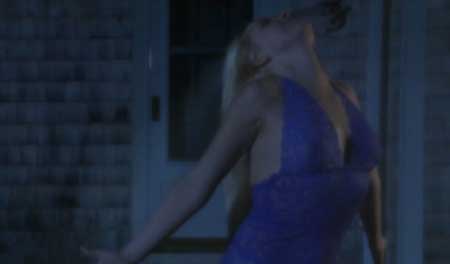 Night Of The Naked Dead purports itself to be a horror film. If you look at the cover art & the title you’d believe that it’s a horror film as well. But it isn’t a horror film, actually I question its right to be called a film. Its tagline is “Sometimes The Dead Have Finished Unfinished Business”, apparently that refers to the existence of this film because it plays like a film that was begun with no real idea as to what it was gonna be about. As if the film makers would just make it up as they went along and they couldn’t even do that right.

It takes place in a small seaside town during an evening in which a massive storm of horrific power has just alighted off of the coast. During this storm, some naked people show up. One of them strangles a cop. One of them finds herself in the home of the main character, Emma (Emma Gruttadauria). One of them breaks into a home, puts on some makeup & laughs at the camera a lot.

That’s about all of it.

And I’m being kind.

What the f*ck is this movie about? I dare someone to tell me what it’s all about, someone…ANYONE! Nothing about it makes a whit of sense and no one seems to be in a rush to try to explain any of it either. Not director/screenwriter Junius Podrug (who really should be arrested for a crime against the eyes of anyone forced to have to watch this bilge), he didn’t care – hell I doubt if he even had a clue as to what it was about either. But what about the special effects you ask?

Don’t we get some cool zombie makeup at the very least? Yeah right…what we get are four semi nude people (One with such a thick Russian accent that I swore I was watching a take on Boris & Natasha for a few seconds), one who just laughs maniacally at the camera while putting on makeup & playing with some furry handcuffs, one who strangles a cop and makes his way into the heroine’s home (although I still don’t know why) & one who shows up at the end, backstage at a big film event, playing a violin. None of them eat anyone either, are they ghosts? Aliens perhaps? Hell if I know. And the STORM? I could drink a bunch of oil paint, wait an hour or so & projectile crap out a better looking storm onto a blank canvas. So what does it all mean & why does it exist? I’ll be good god damned if I know but I’m not gonna ask any of you to watch this and try to explain. This is why I get paid the big bucks y’know, I watch this stuff so you don’t have to.

BTW…I’m not paid nearly enough for this.

That’s it. There’s literally nothing more to say because this is a film about nothing that just happens to have a cool title attached to it. If I was George Romero I’d find some way to sue these clowns because it’s title sorta connects it to his work and that’s one connotation I know he doesn’t want. If I was Hitchcock, I’d dig myself out of my grave and knock on the doors of everyone who was involved in this mess and calmly intone “Good Evening” before I eviscerated them. The IMDB description goes so far as to mention M. Night Shamalamadingdong’s “The Sixth Sense” in its description, how fair is that? I mean he hasn’t made a good movie in years but to saddle his name by using it in connection with this? I gotta shout SHENANIGANS on that one, way to kick a guy when he’s down fellas….

I love movies. I especially love horror movies. This is neither of those things, it’s just something that’s there all of a sudden, like a blister on your foot. If you’re like me and you’re reading this, please read the next few words carefully: DO NOT SEE THIS FILM. You will strongly regret it & you might get so angry afterwards that innocent people might fall prey to your wrath, mountains will crumble and the earth beneath us might open up due to your unfettered fury after watching this – so help me help you dear readers. You wanna help prevent these people from ever making a movie again and possibly save the lives of millions of innocent people? Then tell your friends, family, tell everyone you can – STAY AWAY FROM THIS MOVIE. Help me to stop atrocities like Night Of The Naked Dead from ever occurring again. I thank you in advance for your help.

Night Of The Naked Dead – I hate being lied to and all this movie did is lie to me so (Big Surprise) Zero out of five shrouds.