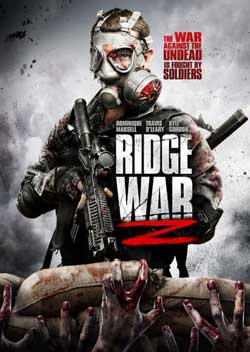 The last surviving veterans of the worst battle of a zombie war recount their horrific memories to an author who is writing a book about they’re experiences.

The fact that I actually asked my editor for some new movies to screen still amazes me. In the past he’s made me watch some truly heinous films, so many that I was sure that the man just flat out hated me. But some time ago he actually promoted me and gave me the official title of Lead Theatrical Reviewer/Interviewer at Horrornews.net (I know this cuz’ that what it says on my business card). And while it’s cool to be thought enough of by the head honcho for him to bestow me with that title, I still work for the guy and that means I still have to watch whatever he assigns me to watch.

During this time of the year there aren’t many horror films being released theatrically. We’re coming up on the Award season & Hollywood is bringing out all of their prestige pictures in the hopes of scoring some Oscar nominations next year & you generally don’t see the words Horror & Prestige in the same paragraph let alone the same sentence. So what’s a Lead Theatrical Reviewer to do when there aren’t any new horror films being released theatrically? He does what he swore to himself he’d never do again & asks his boss to send him some new screeners to watch & review.

And much to my regret that’s exactly what he did.

The first film I watched is called Ridge War Z (Oh, what have you started Brad Pitt? WHAT HAVE YOU STARTED?) & it’s the story of a group of soldiers who return to the place where they faced certain death in the midst of a war against zombies to recount their war stories to a journalist. It starts out well enough with a quote from poet Siegfried Sassoon:

“You smug faced crowds with kindling eye
Who cheer when soldier lads march by,
Sneak home and pray you’ll never know
The hell where youth and laughter go.”

Upon reading this I thought that I was gonna watch a fairly kick ass, low budget zombie flick. Well I definitely got the low budget zombie flick part right as the reported budget for this was $1000! But as to any ass being kicked…that’s a different story. After the quote fades from the screen I got a quick scene with a group of soldiers under siege by something but then the film cuts away to our narrator (Yup. never a good sign). We find him sitting down at a small table, typing his latest magnum opus which is entitled “Gory Ridge”, the story of the group of soldiers we just saw a few seconds earlier. But as he solemnly intones “This story is not to write about the government’s mistakes in the war against the undead. This is the story about the infantrymen who were sent into infernal conflict at the heart of that war”, or something like that anyway.

He continues to wax poetic about this group of soldiers for a few more moments before the title credit sequence begins and some solemn music is played over what might be the slowest opening credit sequence in history (Each credit gets at least 5 seconds of screen time). And then we fade to 3 years later with a car driving up to the titular ridge where this epic battle was fought. The car has the author (& narrator) Eduardo Fonseca (Manuel Eduardo Ramirez) inside along with the last three survivors of the battle, PFC John Blair (Director Alek Gearhart), Pvt. Carter (Dominique Carter) & Pvt. Gordon (Kyle Gordon) who was crippled in the battle.

What the film does right is make the whole situation feel real. Even though they’re obviously in some desert somewhere in front of a large hill where you might expect to see some dirt riders plying their trade and there’s only the four of them somehow the setting feels authentic and a bit askew as well. The three actors portraying the surviving soldiers all give pretty good performances as well although some of their line readings come off as a bit flat & uninspired at times. As the journalist, Ramirez fares the worst of everyone involved. He speaks of how his life is good in his opening narration but I sure couldn’t tell from his dull, flat, monotone & expressionless voice. In the few moments that the film seems to building up some momentum, his dull narration just sucks it all up. The other actors playing members of the platoon fare well but since we already know that only three survived, we know that they’re not gonna be around too long and are just waiting to see how they get eaten.

Speaking of eating, this all happens in the midst of a war against flesh eating zombies so I expected to see some slowly shambling zombies looking for some guts and they do arrive…after about 45 minutes or so! And in a zombie film this is not a good thing. To make matters worse, it’s immediately evident that makeup effects weren’t at the top of director Gearhart’s “To Do” list. His zombies (All four of them) look to have some Karo syrup smeared on their faces and not much else. Call me nutsy (Everyone else does) but it seems to me that if you’re gonna make a movie about a war with zombies you might wanna make sure you have more than four zombies in it. And having to wait 45 minutes for them means that the preceding 44 minutes better be pretty gripping…

And Ridge War Z nearly pulls that off! Granted it’s slow and even a tad meandering but for some god forsaken reason I was really into it. Although the film makers are trying to piggy back on the success of World War Z by aping its title, they take a completely different approach to it and it really works here, despite its ultra micro budget. A few good performances and the film makers respect for our armed forces (at one point the narrator hopes that “The story helps those of us who live in comfort appreciate those who endure absolute misery so that we might enjoy the lives we live today”. In addition the film is dedicated to “All Who Have Fought And Died In War”) helped make Ridge War Z a bit better than I had any right to expect. It ain’t gonna win any awards for great film making but it shows what a determined group of individuals with a few bucks can do when they believe in it.

There’s no way I can’t respect that.