The good people at FANGORIA ENTERTAINMENT have launched their first Kickstarter campaign for the film “THE FACILITY” and they’re looking for a few fans to help make this production a reality. Check out the official announcement below! 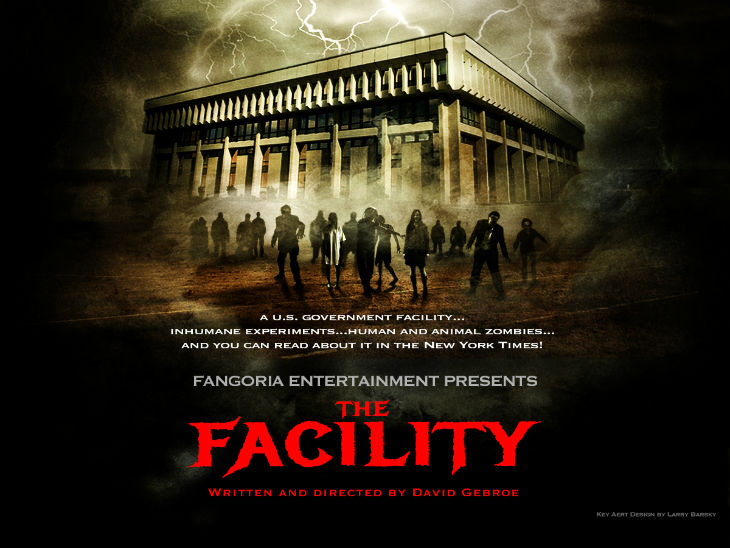 In case you missed it—and shame on you if you did!—FANGORIA Entertainment is producing THE FACILITY, a gritty fright flick with a budget to be raised on Kickstarter.com. And, yes, sir, yes, ma’am, you can be part of this exciting cinematic experience by pledging right here. In addition, for those who donate, there are some really interesting rewards being offered (anyone need a body bag?). Not excited yet? Then check out the promo art below (designed by FANGORIA FrightFest’s Larry Barsky).

THE FACILITY marks the initial production in what is expected to be a series of FANGORIA Originals (see last item here). To be written and directed by Chainsaw-award winning filmmaker David Gebroe of ZOMBIE HONEYMOON fame, THE FACILITY sprang from a news item that appeared in the NEW YORK TIMES in May 2011. The article reported that the U.S. government’s Center for Disease Control (CDC) posted “Zombie Apocalypse” on its “Disaster Preparedness” list. Are those goosebumps rising yet?!

Gebroe’s original script stems from the CDC posting and subsequent news headlines. Based on the outcome of the Kickstarter campaign, it is estimated that THE FACILITY will steamroll into production this summer.

THE FACILITY revolves around a small group of local National Guardsmen who are activated within days after Hurricane Sandy hit the Northeast, and our heroes are ordered to protect an isolated government building. The cryptic place is in the middle of nowhere (natch), and the unwary troops have no clue as to the true nature of their assignment. Their only orders are to let no one into the building, and if they do wind up inside for whatever reason, they must remain on the ground floor. These commands make no sense—to them. What the soldiers don’t know is that this isolated structure is actually a facility from which a clandestine government branch is conducting Top Secret experiments in genetic mutation (paging Dr. Moreau!). So the guardsmen also have no idea of the horrific consequences of these experiments—or how they themselves may very well become candidates in a twisted scientific agenda and conspiracy…

When asked about the method by which THE FACILITY was rolling out for FANGORIA Entertainment, Steven Mackler, one of the film’s producers (along with Fango president Thomas DeFeo), says, “Going the Kickstarter route for a movie project is a wonderful idea. Of course we all understand that some will work out better than others. But the thought that people can have an involvement in a motion picture project on their own terms and level makes the notion of a collaborative effort that much richer. I think you’ll see a host of worthwhile and well-produced films being made for relatively small budgets. There’s no rule that says that interesting content requires a large amount of money. The scope may require more money, but the brains do not necessarily. There are many talented and creative people who have not yet earned their stripes but who are fully capable of bringing interesting projects to either a large, or at least a small, screen. I’m as excited about the possibilities down the road as I am about those of this FANGORIA launch production.”

“FANGORIA has been in business for 35 years thanks to the loyalty of its readers,” says co-producer DeFeo. “It seemed a natural to involve the fans in our first crowd-sourcing venture, because they are the FANGORIA Family. They trust us—and we trust them—when it comes to identifying a really scary cinematic experience. Those who take part in the FANGORIA Original Kickstarter film will be helping to bring our trusted brand into a whole new realm of horror entertainment.”

So mosey on over to THE FACILITY’s Kickstarter page to learn more about this thrilling venture. And to cover all the bases, don’t forget to “like” THE FACILITY on Facebook and follow us on Twitter @FacilityMovie. Help prove why FANGORIA continues to boast the most dedicated fan base in horror history! Thank you!

So go read about the whole campaign & the incentives that are being offered & then tell your friends all about it. Then GIVE! Give till it hurts!
And then give some more!! 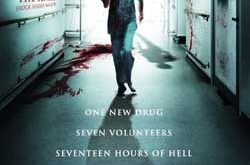