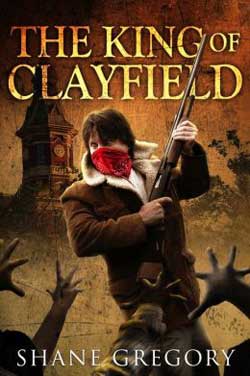 Once again, I find myself reviewing a zombie apocalypse novel. While some may be growing weary of the genre due to the sheer volume of zombie novels that have came out lately, I personally enjoy the idea of stumbling onto a book that manages to take a fresh look at an undead corpse despite the fact that the genre is already so overpopulated.

The question then is whether or not Mr. Gregory’s ebook The King of Clayfield does that or not. Unfortunately, the reader won’t find quite as much originality as one may hope for, but that doesn’t stop Mr. Gregory’s zombie take from being very enjoyable. In fact, while there may not be much difference in the overall zombie theme, The King of Clayfield does manage to do one thing that most novels don’t: it comes off as very real.
What I mean by this is that the main character reacts in ways that seem so plausible and human that the reader truly feels a connection with him and his plight. Just as an everyday citizen would be torn up inside over being forced to kill a child (albeit a zombie one), so too is our hero. The emotions are all spot on, as are the reactions and that is what makes The King of Clayfield worth reading.

The story revolves around a museum director who is taken by surprise when a virus known as Canton B infects the population of his small town and turns them into zombie-like monsters. In the dark about everything that’s been happening, his first sign of something going wrong is when cars begin crashing in the streets and a police officer starts firing on civilians.

From there, his world crashes down as he’s forced to defend himself from zombies of all age, gender, and size. I loved the fact that the character truly takes into account the moral punishment of each action. I have read many a zombie book in which the lead character may reflect for a moment on his actions, but never one where he actually goes out of his way to avoid killing those that he’s well aware will kill him simply because it is truly what our morals would hold us to do. The museum director is such a real, open person that I dare any reader not to connect with him and feel the same way he does.

I realize I’ve spoken extensively of the character himself and not the story, but that’s because the story is typical zombiefare. Nothing new is really offered pertaining to how the virus starts or spreads, which is why I probably wouldn’t even recommend this were it not for the protagonist that brings the story to life.
Therefore, if you’re looking for a decent (and cheap) zombie novel for your Kindle that might actually manage to give you an emotional and true-to-life character to root for, you can’t go wrong with Mr. Gregory’s The King of Clayfield.