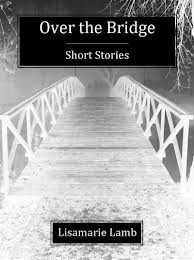 I feel it necessary to start this review by giving you a quick bit of information: I am a sucker for short stories. I absolutely eat them up and as such my personal book collection has its fair share of anthologies and collections. Therefore, gladly and without knowing a thing about the stories or author, I took on the task of reviewing Miss Lisamarie Lamb’s short story collection Over the Bridge.

Short, indeed, as the entire sixteen stories encompass only 87 pages total. However, while most of the stories are only a handful of pages long, they are entertaining enough that it’s okay. As is the case with most short story collections, there were of course some hits as well as some misses, all of which will be briefly reviewed and graded on a scale of one to ten below.

The first story in the set is one titled “The Plot Thickens”, in which a married couple both plot to kill each other and collect the life insurance, leading to a rather upsetting ending for them both. I think it did a decent job of setting the mood for the rest of the stories in the collection. With a slight dash of twisted humor and a satisfying ending, this one was a short but sweet experience that earns a seven out of ten.

“Pretty”, the second story in the book and also one of the shortest, was in fact too short in my opinion. I liked the idea (a woman so vain that she goes to drastic measures when a child calls her “pretty”), but I would have liked to see more than just what is offered in the one and a half pages it covers. “Pretty” still gets a six though for concept and (lightning fast) execution.

“Cat’s Got Your Tongue” was one of my least favorite. It’s basically the dialogue of a woman who lost her husband and, evidently, her mind. How the cat comes in to play I’ll leave for the reader to discover. This one just didn’t entertain me in the way the others did, so it gets a four out of ten.

“Say Cheese”, in all honesty, reminded me of an old Goosebumps book I read as a kid. In fact, it’s the same plot: a mysterious old camera is found at a yard sale, pictures are taken, and horrible things happen to the people in the pictures. While it was entertaining, I can’t give Ms. Lamb many points for recycling a children’s story and not adding any sort of twist to it. Two of ten.

The following story, “Medicine Man”, was a great improvement and in fact was one of the best in the book. This is the story of an old Indian medicine man who’s slight booze problem leads him into much greater issues. I can’t say much else without giving things away but this was a very refreshing story that gets an eight of ten.

“An Average of Forty-One a Year” is another of the high-ranking stories offered here. It involves two couples going on vacation for very different reasons. I won’t offer any other clues, but this is a definite eight.

I was not a big fan of the seventh story, titled “Tyger, Tyger”. It uses a young girl’s imagination to bring about interesting effects, but so much more could have gone into the story. Four of ten is all this story gets.

“Travelling West” was a gem in my opinion. The story is about a woman on a bus telling her own story to some strangers about why she’s upset. I loved the dark humor of the ending and give this a nine of ten.

While “No Crying Over Spilled Blood” has a pretty lame name, it is a story that really made me want more. I adored the legend of the crying woman that Ms. Lamb created in this piece and I really hope she brings her back for future stories. This is the one and only ten of ten in the book.

The tenth story, “Soft Snowflakes”, was both the shortest and weakest of the collection. A young woman reminisces about her deceased husband. One of ten, the end.

“Her House” is a quick little ghost story. Nothing too special here, just a five of ten.

“Benson’s Barn” was another that just did not impress me. It’s about an abandoned barn that a man takes over and turns into a mechanic shop. I’ll give it a five of ten, as it was decent but nothing special.

I didn’t like “The Guardians”. There wasn’t anything here that impressed me. There’s a bit of narrative about a gypsy curse and that’s it. The guardians themselves are never explained. Two of ten.

“Horizon” was fun to read. Unfortunately, it’s again a very short two-pager. However, it offers a twist ending that is delectable for those with my kind of dark humor. This one gets an eight.

Here is yet another very fun tale. Number fifteen in the book, “Eternal” is the tale of a woman who will go to any length to live forever and yet doesn’t have the patience to save herself. This one is a nine, no questions asked.

At last, we come to the final story of the book, “The Dead Ship”. While it wasn’t the greatest story, it wasn’t the worst either and it deserves a six of ten for the interest it kept.

Overall, the quality of the stories is a bit of a mixed bag, but there are a few gems in here that make this particular collection well worth the money.

Tags Lisamarie Lamb Over the Bridge