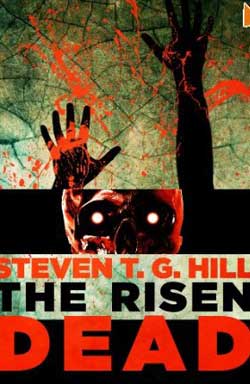 The good news for us horror and zombie fans is we are still blessed with quality new zombie offerings. Steven T.G. Hill’s The Risen Dead falls into the quality category; it is simple and fun zombie entertainment that knows what it is and knows it well. Hill lays out a familiar zombie story (at this point what zombie material isn’t familiar?) in a well written and fast paced manner. Hill spares us from an in-depth explanation of what caused the zombie outbreak and how. Most quality zombie material avoids spending too much energy explaining how the zombies came to be; we want to see action! We want bullets to the head and frenzied mobs of zombies almost catching the good guy. We want to feel the hopelessness that comes after the outbreak. We want to see the endurance and grit of the survivors in the face of that hopelessness. The Risen Dead delivers just that. A common thread in great literature and writing is for a novel to present an ordinary individual in extraordinary circumstances. Hill does just that.

The main c0haracter of The Risen Dead is Jackson, a man so ordinary that we don’t have to waste time deciding whether we like him or not—he just is. Jackson drives a 97 Civic with a busted headlight and works a ho-hum job. He has a small apartment with an empty fridge and little in the way of luxury. He is an average man by any measure. Jackson’s true light of his life is his girlfriend Claire. We meet Jackson as he arrives home from work, excited about the gift of jewelry he is about to give to Claire. Jackson’s love for Claire is evident and proves to be a major inspiration for his will to survive as the world around him collapses into horror. Unfortunately for Jackson a zombie outbreak gets in the way of his gift giving.

The zombie outbreak is a quick punch to the face. Jackson doesn’t have time to comprehend his situation; one moment things are normal and the next the streets are full of the undead. Few survive. Jackson survives via a combination pure luck and sheer grit. As the story unfolds we rarely if ever see Jackson enjoy a moment of calm or relaxation. Finding food and water is a strenuous and deadly task, as is finding other survivors.

Speaking of survivors, Hill presents a scenario common to quality zombie material, that being the possibility that fellow survivors are sometimes more than dangerous the undead. An apocalypse brings the best out of some and the worst out of others. The Risen Dead explores this in a subtle and believable manner. The Risen Dead is a story about a lone survivor but the people we meet along the way are intriguing.

Hill’s writing is crisp and straight forward, making for a clear page turner that I suspect many readers will inhale in one sitting. The Risen Dead is a short read, coming in at 122 pages in e-book format. I would relish the opportunity to spend more time with this story and its characters but at the end of the day the length is perfect. The Risen Dead does not break any new ground or seek to revolutionize the genre. This is a good thing. A zombie story is always fun when well done, and The Risen Dead is just that. Hill does throw in some unique actions (and weapons!) but never strays too far from its path. As a final note it is rare to see an independently published novel of this quality. Bravo to the author.