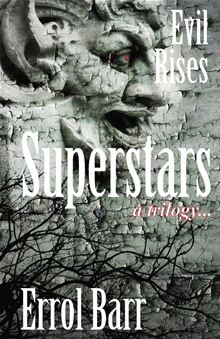 Evil Rises is a novel beginning in 400 A.D. and ending in present day. At the onset, the reader is introduced to a scene of the Devil attacking a king and killing his wife before threatening his seven sons if the king does not give up his attempt to spread Christianity. Ignoring this threat, the king enlists God’s help and ends Satan’s plot before it can ever take off.
Fast forwarding to present day, Satan is still bitter over his defeat but has come up with a new plan; he will birth seven of his own children in different areas of the world who will then come together to create a musical band so impossible to resist that the world will be under his spell.

Although Satan believes his plan to be flawless, with faith to back them, a group of ordinary heroes may just be enough to send him crashing back down to Hell.
In case you couldn’t tell from the summary above, this book very much revolves around religion and the age old battle of good versus evil. While this may discourage some readers who don’t want to get involved in a religious novel, I would encourage you not to venture away so quickly. Although it is indeed rife with religious annotations and references, Evil Rises is still a very good novel overall.

If nothing else, the concept itself is interesting enough to at least give it a try. Oftentimes, today’s music has been put on the chopping block by certain religion-based groups as being harmful to youth, but Mr. Barr takes that idea to a much greater severity by asking what happens when the Dark Lord himself creates music so enticing and irresistible that it literally takes over your mind, turning you into one of his minions.

I will admit that there are instances where the book seemed sluggish and the descriptions seemed to drag on, but that’s made up for by Mr. Barr’s ingenuity of ideas. Each of the seven superstars has their own backstory of violence and evil and the rise of our unlikely heroes is great fun to follow.

The book isn’t quite horror in the way that most novels I’ve reviewed on here are; the horror comes more from the mind. Rather than scenes of tremendous violence, we’re asked to imagine in our own heads what it would be like to live in a world mesmerized by the very embodiment of hatred.

Mr. Barr’s first in the trilogy is not without error, of course. While his writing is decent, grammatical errors abound from start to finish. There were times when I was turned off from reading because I would catch so many mistaken or missing commas in just five or ten minutes that I became distracted and had to start over.

Luckily, the lack of a good editor isn’t enough to bring this novel down. It is a bit meaty for some to handle (470 pages), but if you can look over the errors and focus your attention on what’s actually happening, Evil Rises will not disappoint.