Now THIS is how you make a zine. DIY zines may seem like a thing of the past to a lot of people, but with the rise in interest in classic horror, VHS collecting and genre appreciation, it’s good to see underground print magazines starting to resurface a bit more.

This 72 page monster is a superb starting point for this title, offering material on films like The Satanic Rites Of Dracula and Maniac Cop, as well as cult music, reviews, interviews (including a superb one with Brian Yuzna), a piece on Dark Shadows, JFK’s assassination, short fiction and more.

It’s been professionally printed, but has a beautifully cut-and-paste aesthetic (the old meaning of the term, not Ctrl-C, dear youngsters). The layout reminds me of the old black metal zines from the early 1990s, which gives it an atmosphere of its own right from the cover art of Templars roasting a corpse. 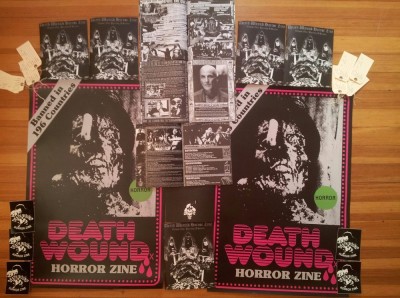 and a GIANT Death Wound poster made up to look like an obscure VHS horror title. The poster is awesome, and is pretty much worth the price of the mag alone, but the magazine itself is just as good. My own favourite piece in this issue is the feature on maniac Cop, which gets the fan love across well, but still manages to be critical and fair.

There’s some great writing in here, brought to you in a punky and chaotic fashion. Despite a few typos throughout the magazine, this is a glorious return to an age when independent fandom was the place a lot of horror fans got their fix. To truly appreciate the aesthetic and the content of the zine, it would help if you have an affinity with underground metal scenes, but it’s not essential.

Basically, if you want something different, something raw and something that isn’t held back by any form of censorship, then Death Wound Horror Zine is a piece of twisted perfection. This first issue is SOLD OUT already, but check the next one out – you won’t be disappointed!