Book Review: The Darker Side of Oz – Author Scott Stanford 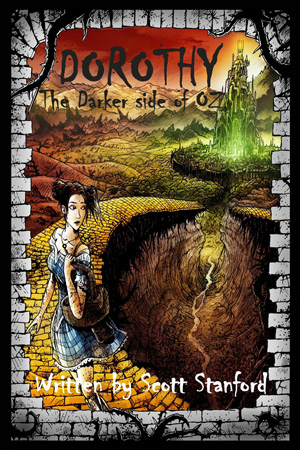 Dorothy The Darker Side of Oz by Scott Stanford, is just that, a much darker version of Dorothy’s descent into the land of Oz. When I received this book, I wasn’t sure exactly what to expect; I had seen both the Judy Garland, happy Wizard of Oz movie and the much darker, Fairuza Balk feature, Return to Oz, so I was sure this would lean much more toward the latter movie. Actually, it leaned far past the Return to Oz movie, into a deep and dark world of sinister and evil beings with devious intentions for Dorothy. This was less like L. Frank Baum’s Oz and more like a Grimm Fairy Tale with its very dark atmosphere.

Dorothy is a very tortured young woman, with a tragic past but a glimmer of hope for a brighter future. Her eighteenth birthday is right around the corner and she’s ready to step out of the foster world and into adulthood. Something else is waiting for Dorothy, however; mutilated munchkins, evil witches, and a dark world beyond anything she can imagine, Dorothy was not prepared for this.

Dorothy is much tougher in this novel, a heroine of great strength and determination is how I would describe this version of Dorothy Gale. She is fighting for her life and her sanity with her group of strange acquaintances in tow. Following the yellow brick road to the Emerald City has never been more dangerous than in this dark and macabre tale.

The usual suspects also show up in this tale; Dorothy befriends the Scarecrow, the Tin-Man, and the Cowardly Lion. These characters are a bit stranger than the jolly fellows in the original Wizard of Oz. The Scarecrow is a man with no memory as to his past, since he has no brain. The Tin-Man’s tale is both melancholy and horrifying as we find out just how he became a man made of tin. The Cowardly Lion is a circus captive who is lonely and fearful after losing a dear friend. The great Wizard of Oz is also more sinister in this version than in the original, making Dorothy and her friends go to great lengths to get the things they wish for most, facing off against a witch more powerful and vengeful than in the old fairy tale.

This is a very adult novel, and a seriously dark twist on Baum’s original novel. A plot full of pain, torture, and darkness this is truly a very sinister take on the old classic. It’s also a tale of girl with a very determined spirit who wants desperately to find her one true home. It’s about a girl who, despite everything that she is up against, continues to fight her way through to get the one thing she has always wanted more than anything else in the world.

I’ll admit, I had a little trouble getting into this book in the beginning, but eventually I powered through it and found that I did enjoy the story more as it progressed. The setup of the dialogue was a little strange at first, as it was set up in italics instead of just quotation marks, but I eventually got used to it. The plot was definitely dark, twisted, and full of surprises and never lacked in action. I would recommend this novel to those who enjoy macabre fairy tales or anyone who is interested in reading something with a very dark and sinister feel. Following Dorothy down the yellow brick road has never been more dangerous or creepy.

Book Review: The Darker Side of Oz – Author Scott Stanford

Tags Scott Stanford The Darker Side of Oz