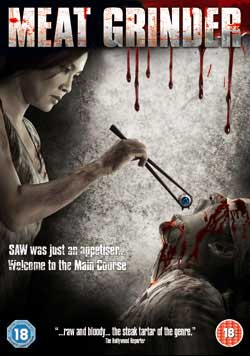 MEAT GRINDER takes you to taste the bizarre horror of traditional noodle recipe cooked by Boot, a woman who owns a noodle stall, a unique noodle stall

Who watches the horror movies from Thailand? I watch them, that’s who! And here is another movie I knew absolutely nothing about and even though I’m somewhat certain it had a low budget, Tiwa, the director achieved a good looking film with a bright colored blurry look with flashback scenes in black and white, good editing and a claustrophobic feel. And with a title like MEATGRINDER I was halfway expecting something in the way of SAW or HOSTEL but from the beginning I didn’t get that feel. Set in Bangkok during the 70′ it deals with a woman, a mother named Bood and her daughter Bua who have been abandoned by Boods husband.

We know this early on in a scene where the landlord knocks on the door and tells Bood that she owes back rent and must pay up soon or she will be evicted and mentions her deadbeat husband. Bood inherited a noodle cart from her mother and one day while she is pushing the cart down the street a political riot breaks out and in the chaos a young man grabs her and pulls her to safety. In the alley they share a moment and become restrained friends. the boys name is Attapon. Later she retrieves her noodle cart and after taking it home she discovers the dead body of a student rioter inside. So she grinds him up to put the meat in her noodle soup! So right away this movie lives up to it’s name! But the dead guy, whose name was Chard, was friends with Attapon and Attapon is searching for him hot knowing he was killed in the riot.

Now this storyline would be adequate enough for a gory horror movie but there is alot more going on and most of it is in Boods head. We get to see flashbacks of Boods childhood and her father her touches her in an inappropriate manner but Boods mother doesn’t meekly stand by, oh no, she smashes dads hand with a hammer! So Bood had a bad childhood but now a grown woman she hears voices that tell her to do bad things and the only way she knows how to drown out the voices is by dunking her head in a barrel of water. And there are other memories of what happened to Boods husband.

And then there’s the gore factor of MEATGRINDER. I’m always on the prowl for a new gore film and MEATGRINDER delivers on that front. When the first big kill scene happens I was surprised. With the human meat Bood used in her noodle soup she earned enough money to open a restaurant so some lowlifes who Boods husband owed money to come around to collect. They want free food and just maybe might take more payment out of Boods ass. She poisons the food and then attacks them with a meat cleaver and it’s a brutal scene. She slices throats and chops into flesh and even slams a guys head into a nail sticking out of a wooden beam! Great stuff! And there are other scenes of her killing folks and of her covered in blood and chopping up meat for her noodle soup.

It even turns out that Bood caught her husband and the babysitter doing something horrible to Bua and she dispatches them in a violent and bloody manner and quite ruthlessly as well. I watch alot of gore flicks and even I was a little surprised. A Little. What they did was kill Boods daughter Bua and hid her body in a barrel. When Attapon is hanging out with Bood he discovers the little girls body and calls the cops but they assume her husband ran off with the babysitter and without any evidence they let Bood go.

The real tile for this Thai film is CHEUAT GON CHIM which means TASTE BEFORE CARVING and before that it was called GUYA – DTEOW NEVA KON which translates into HUMAN MEAT NOODLES but the film makers had to change the name at the behest of the national film censor board.

I liked MEATGRINDER, it is a well made film and along and the actors mostly do a good job, especially Mai Charoenpura, the actress who plays Bood who exudes a understated seething contempt for other human beings and men in particular. Bood has such debilitating psychological problems that by the end of the movie I felt more sorry for her than most of her victims and felt that she is a victim as well.

There is a warning before the film that the film is a work of fiction and that not all noodle soup vendors are vicious killer but I think MEATGRINDER somewhat indicts the role Thai society regulates women and children to and the way men treat them.

I couldn’t find any info about MEATGRINDER on the imdb or Wikipedia but I found some reviews about it and they were all positive even the Hollywood Reporter review. Even with glowing reviews MEATGRINDER will quietly pass along quietly into the night but it is a good film with good gore and I will watch it again and I hope you give it a chance. Thanks again to Mike and horrornews.net.