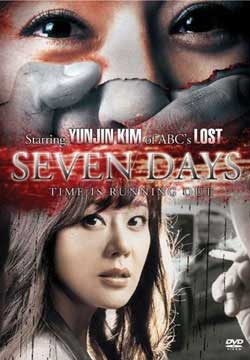 Yoo Jiyeon is a successful lawyer; she has never lost a case. When she isn’t working she is also a single mother to her daughter Eunyoung. Her perfect existence however is threatened when suddenly he daughter is kidnapped and she is forced to take on a new client for her daughter’s safety. In order for her daughter to live she has exactly seven days to convince a jury that the suspect they have for a murder is indeed innocent, it of course doesn’t help that all of the evidence actually does finger him for the crime though.

“Everything that happens from now on is your fault, because you broke the promise!”

7 Days starts by showing Yoo Jiyeon come home only to find a picture of her daughter with the message “you will never see your daughter alive” scrawled on the back of it. Her phone is ringing and after she picks it up the viewer is treated to a very CSI inspired opening credit sequence. This sequence almost hints as to what occurs in 7 Days, with the exception of a kidnapping subplot the film plays out like a very long crime show one might see on network television.
After the credit sequence the viewer is actually introduced to Yoo Jiyeon as she wins yet another case in court. After all of the courtroom drama the viewer is shown the young mother and her daughter enjoying a bath together and discussing the fact that they are entering a mother and daughter relay race the next day.

What happens at the relay race is any parent’s worst nightmare. Yoo Jiyeon’s daughter Eunyoung falls down at the start of the race but quickly recovers and starts to pick up some serious ground. Eunyoung passes the baton to her mother who quickly jets off. Yoo Jiyeon wins the race and as everyone is cheering as she quickly begins to look for her daughter. Eunyoung is no where to be seen and director Shin-Yeon Won really does capture the horror of the entire sequence in the scene.

When we next see Yoo Jiyeon she sits in a room full of police officers. Her phone rings and the voice on the other end lets her know that she has already broke her promise by getting the police involved so now everything that happens is her fault, she is informed that she has to lose the police and only then will she be told how she can get her daughter back. This leads to a pretty impressive car chase scene in which Yoo desperately attempts to shake any of the police off her tail, this seems easy however she starts to pick up patrol cars following her along the way.

Yoo Jiyeon finally does find out what she has to do for the safety of Eunyoung though and that is simply representing a man named Jeong Cheoljin who has been accused of murder. Jeong has had a history of crime and this time he is facing the death penalty. The voice on the phone with Yoo informs her that this has left a bad taste in their mouth and that the young successful lawyer only has to succeed in proving the man innocent to get her daughter back.

The murder in question was of a young artist girl who was killed in her studio brutally, the girl’s body was then found left in a marsh. Jeong Cheoljin was arrested two days after the said murder at his own girlfriend’s house. Jeong’s past list of crimes, including rape really do not help the situation neither does the fact his finger prints are all over the crime scene. Too make matters much worse Yoo is shown pictures of her daughter on her laptop and told she has only four more days to prove the man innocent.

When Yoo first takes the case and meets Jeong he instantly attacks her, making this truly every parent’s worst nightmare since the once seemingly impossible task now seems completely out of reach. Yoo Jiyeon quickly gets to work trying to prove the man’s innocence which leads to some scenes involving a local nightclub and some gory recreations of the initial murder in the first place. Things get really tough for Yoo though when she receives a call from the kidnapper who informs her that her daughter has had an allergic reaction to some tuna and is now starting to swell up.

The kidnapper takes advantage of Yoo several times in the film from the pictures being sent to Yoo’s laptop to hearing her daughter scream in cry in the background of telephone calls. Things get really crazy when the kidnapper sends Yoo a statues hand stating that in only a few days Eunyoung’s real hand will be sent to her. Again this film really does represent every parent’s nightmare and the horror of the situation is captured. With the exception of these kidnapping scenes and the recreations of the murder there really isn’t much horror here, it seriously does play out like a syndicated crime show.

It doesn’t take long for Shin-Yeon Won to start to introduce new characters and subplots and then the conspiracies that start to form all leading to the day in court where Yoo has to fight against a rival lawyer for the safety of her daughter.
I don’t know if I would consider 7 Days a horror film, although like I said up there it does touch on several terrifying aspects this is the kind of horror that happens in day to day life. The main horror in this film is going to be felt by parents for even the murdered woman’s mother has a part in all of these conspiracies that aren’t limited to a government official seeking office, heavy drug use and the promiscuous life style of the victim, Jeong’s life of crime and a girlfriend who finds out she gets a large sum of money if Jeong is put to death. The subplots really do start to hamper the film since it is subtitled and the dialogue goes insanely fast during parts of the film, it can get quite confusing at times.

The mood atmosphere and cast however are all top notch in 7 Days so its never a boring film and the recreations of the murder are done in such a sickening fashion that even the splatter fans could get into this one however this is a horror film that is meant to terrify parents, if one isn’t a parent or has no sympathy for that there really isn’t any horror in this one.