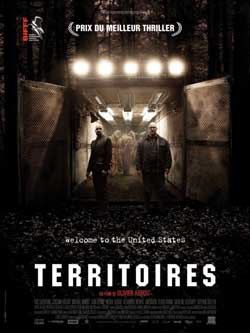 Five friends return home from a marriage in Canada to the United States. Not far from the border, two customs officers stop them to check their identity.

Cripes, it’s not even safe to travel to Canada. What is this world coming to? “Territories” falls into the traveler as torture victim subgenre and actually does a pretty good job of making the viewer uncomfortable. These are the kind of films that are pretty good to see once but just a little too depressing to watch over and over. 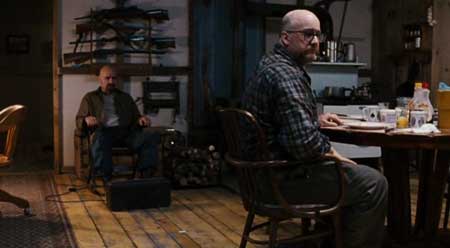 What separates this one from the pack is that it tackles some hot button political issues to a degree but thankfully doesn’t do any real kind of preaching. For that I give the filmmakers credit. It’s in there if you want to talk about it after the movie is over, but as a straight up horror movie it stands well on its own.

The movie wastes no time in getting down and dirty. It starts with a car full of five friends, three men and two women, on their way back from a wedding. The road is more or less deserted and there are dense pockets of woods on either side. 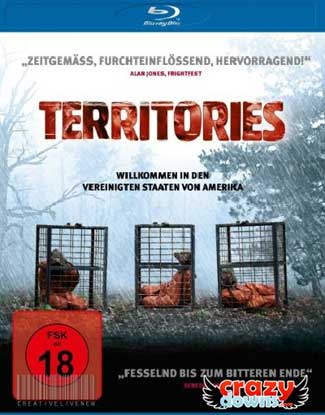 Suddenly they see a road block of sorts with two customs / border police telling them to stop. They think they are being pulled over due to a broken headlight that happened when they hit a deer earlier in their trip. Boy are they wrong.

Sam, the main policeman, played very creepily by Roc LaFortune, asks them if they have anything to declare. Even after they repeatedly tell him no, he just keeps asking. On top of that he has a special interest in Jalil, who is the driver. Sam thinks that he might be a terrorist and isn’t about to give him any leeway.

The questioning continues and at times turns to the bizarre. To say things quickly deteriorate is putting it mildly. In no short order you have an animal death, human death and a sexual assault all in a matter of minutes. However you may feel about the rest of the movie this first scene, which is rather long, is very intense and honestly the best scene in the film. The tone and feel of the movie is set firmly in place and you realize right away there won’t be a remotely amusing moment in this entire film. 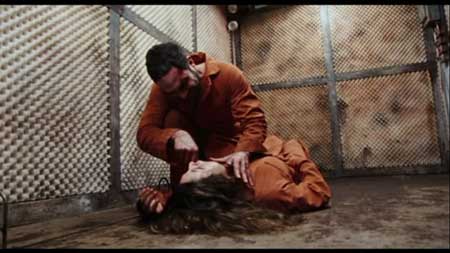 Which is perfectly okay. This is a type of film that is going to hit you over the head again and again. No subtle theme here. No real subplots, though it does try. The main fault of the film is that while intense, it doesn’t ever feel like it’s going anywhere.

With these types of films you always have the built in tension of wondering just who may, if any, survive. Unlike say your slasher films where you know that the heroine will kill the maniac killer, the torture genre isn’t bound by such rules. Depressing endings are very much possible and that is the main reason that these films are able to keep you glued to the screen. You can honestly say that you’re not sure if anyone is going to make it out of this alive. 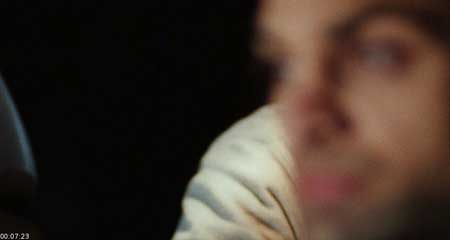 Overall this is a movie that I would recommend to see once but only on rental. I really wouldn’t rate it a purchase. The performances are the main strength and are absolutely superb all the way around. The directing is very well done and Olivier Abbou does a great job of keeping you right in the middle of the action. There were a few moments of “shaky-cam” which seemed a little out of place.

The pacing is pretty quick and it helps that you are thrown into the situation right away. The downside is that towards the end it just loses steam. In a way it feels unfinished. For some the ending will be a disappointment. Me, I sort of liked it. But that’s the case with these kinds of films, they just aren’t for everyone.