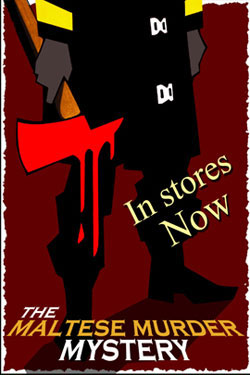 Some 40 years after a notorious unsolved crime that came to be known as the Maltese Murder Mystery, a guilt-ridden eyewitness (Debra Stotts) spills her secrets to her police detective daughter (Nichole Dingee) and points the way to the elusive killer. A cold case heats up quickly with a shocking story– revealed in flashback — of addiction, betrayal and passion gone awry.

When families are destroyed to do criminal happenings, the best thing to do is to hide the past so that new beginnings can lead to a somewhat normal life. When the past is too overbearing for comfort, sometimes it is best to let the truth be known, and to finally be able to close that difficult chapter in one’s life.

This is the case in Joseph Parker’s “The Maltese Murder Mystery,” where an unsolved crime is revisited and set up for closure by the ones in which were involved.

Laura Posey(Nichole Donje) wakes up to another day on the police force working as a detective in cold case files. She lives with her mute sister, Betty, whom just stares aimlessly out the window most of the day. When Laura makes it to work, her chief tells her that she must arrest Frank Maltese(Laurence Cantor) due to a tip by Laura’s mother, Ava(Anne Richardson). Laura is confused by this accusation, and calls her mother to ask why she must arrest Maltese. Ava assured her that this was important to her livelihood, and must know the truth about her life. 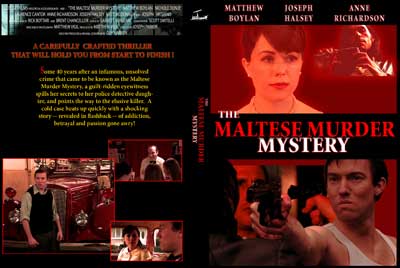 Laura goes over to Maltese’s house, and declares to him that he is under arrest for the murders that occurred 40 years ago. Maltese is shocked that after all these years he is being arrested, and asks Laura to follow him into his home. Maltese pulls out a photo album, in which he immediately starts to reminisce about his years working at the malt shop/drug store.

Laura recognizes him as the man behind the counter at the store, and listens to him as he talks about his past. The movie then cuts to 1963, where Maltese is able to explain his hidden past and how Laura correlates into it, as the reason why Ava brought her daughter into the picture. There are scenes where young Laura(Miranda Gruss) and Betty(Rebecca Gruss) are shown very sisterly with young Maltese’s (Matthew Boylan) daughter, Maria(Noura Jost). Maltese is also shown being hassled by citizens of Locust Valley, filling prescriptions without a script. He is friendly, and wants to help whoever he can. His friendly goes back 9 years ago when an emotionally distraught young Ava(Anne Richardson) runs in, and Maltese comforts her.

She declares that she is having problems having children with her husband, Jack Posey(Joseph A. Halsey), and eventually Maltese helps her with a problem by getting her pregnant.

Ava gives birth to twins, and nine years later, Maltese and Ava still keep their distance. He tries to see his daughters by parking across the street, but Ava immediately tells him to leave. While Maltese deals with separation from his daughters and lover, he must also deal with an unruly theater director, Peter Becker(Dan Matisa), and threat from Ava’s husband, Jack. When bad things start happening to Maltese, all signs point to a jealous husband, and all signs lead to revenge no matter what according to Maltese.

Of course Laura figures out the reason behind Ava’s tip about Frank Maltese, and the family is brought back together at the end of the movie. The heartwarming ending outdoes the despicable acts of crime that Maltese commits when he finally snaps, and successfully get his revenge on all those who have done him wrong in the small town of Locust Valley. The murdering spree involves gun shots, poisoning, and an ax to the chest that gets semi-bloody. Joseph Parker’s “The Maltese Murder Mystery” is an interesting tale of deceit and murder that keeps the viewer drawn into solving a case that could not rest peacefully.