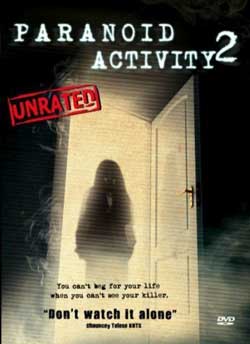 Three college friends move into a small rental house in the middle of a cold and dark Alaskan winter. During a house warming party, a psychic medium calls forth a ghostly presence that increasingly becomes hostile toward the three. With very few options on the table, they must decide to confront the hostile presence, or die.

Welcome back to my mausoleum acolytes old & new! It has been a sweltering week here in NYC where my mausoleum is currently based. Temps have reached 106 degrees & this is quite uncomfortable for me. I don’t like leaving the mausoleum but I have to on occasion & when it’s all steamy & sunny I get annoyed. A lot of my acolytes are on vacation as well (Yes, I give them some time off from time to time), so I’m left to perform some of the more mundane chores for the week. Being in a bad mood already, I figured I’d watch a movie to take my mind off of my troubles. Little did I know what atrocity I was exposing myself to…

The film is called “Paranoid Activity 2”. Hmmm, wonder what that could be about? You know, after the success of “Paranormal Activity 1,2 & the soon to arrive 3, there were the inevitable ripoff films looking to cash in on the title. The most popular one of these was The Asylum’s “Paranormal Entity”. Which was pretty much the same movie with different actors & a slightly different title. Well, “Paranoid Activity 2” is another film with basically the same premise but none of the talent in front or behind the camera. As a matter of fact it’s one of the worst films I’ve ever seen in my centuries on this pitiful blue marble I’m forced to share with you peons.

“Paranoid Activity 2” opens with three friends (Vivian, Bridget & Jonzi) who have recently moved into a nice little rental home. They have a housewarming party & one of them invited a psychic who tells them that there is “Something” in the house and for $100 dollars he can get rid of it. They think he’s a shyster & turn him down. Jonzi (The male of the trio) films every second of the action with his camcorder by the way. They should’ve listened to the guy though because there is something in the house & it isn’t happy to have roommates. The morning after the party, they awake to find that all of their pots, pans, dishes & glasses are neatly arranged on the kitchen floor. A joke by one of the previous evenings guests they assume. They laugh it off & begin talking. And talking, And talking some more. As a matter of fact they talk a lot in this movie which is a problem because the sound is so muted I had to turn the volume on my TV up to 80 to even make out what they were saying. This my friends, is not a good sign.

The next morning, our mumbling trio of actors finds the kitchenware all over the floor again. They laugh it off again but they do it nervously. Jonzi sets up the camcorder facing the kitchen so they can see what’s going on. Problem is, he sets it up from the living room floor where they all sleep. Why do they sleep on the living room floor when here are perfectly good bedrooms available in the house? I don’t know..if a reason was given for this I couldn’t hear it. He sets up the camera right by where they are sleeping, not in the kitchen where all the action is taking place. They see the kitchen lights flickering off & on momentarily. That’s it. I suppose that’s why the camera was put where it was, so we couldn’t see the crew member flicking the light switch off & on.

Our trio of geniuses are too scared to investigate the flickering lights as it happens so they wait until sunrise only to find the same mess in the kitchen. Now you’d figure they would start to at least talk about leaving right? Not these clowns, they just talk…and talk some more. Eventually Bridget does leave but Vivian & Jonzi stick it out. Why? I haven’t the foggiest idea. There is nothing keeping them in the friggin’ house. They’re just stupid people. Of course, the dishes get splayed out on the floor the next morning & the lights keep flashing off & on. Apparently, this is the best the film can do. Flashing lights & dishes that end up on the floor day after day. Were they serious when they made this movie? At one point, Jonzi has a plan & sets up an elaborate web of string thread all over the kitchen figuring that whatever is making the mess would have to make a sound with the string all over the place. Unbelievably, the scene is played out in real time so we get to see the idiot thread string about his kitchen for over four minutes. Talk about padding the running time of this turkey. I was amazed that they would stoop so low to as to actually put anyone through watching this. But they did. And then they talk some more….

Eventually, we see the source of the activity for about two seconds. It reminded me of the creature in the original Outer Limits episode “Behold Eck”! Except that it looked a hell of a lot better in a show that’s over 40 years old than it did here. I don’t even want to talk about this “Film’ anymore. It’s not a movie, it’s celluloid garbage that’s not even good for a laugh. All involved should be barred from getting near a camera again. What I would like to do is offer the filmmakers some suggestions just in case they are crazy enough to attempt another filmmaking endeavor. 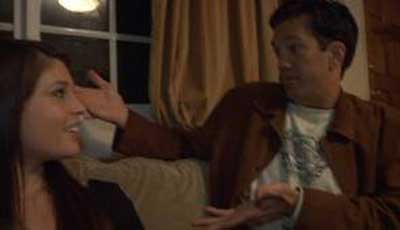 Firstly, there are people who perform in front of cameras for a living, they’re called “Actors”. No one in this film is an actor. They can mumble their lines incoherently & even smirk to themselves when they’re not supposed to but they can’t act for sh*t. Next time, hire some actors. Secondly, when you’re supposedly using “Night Vision” to film the night scenes it would be a good idea to actually get a camera that has a “Night Vision” option in it. These idiots put up a green screen in front of the lens to simulate “Night Vision”. What camera doesn’t have a “Night Vision” option on it nowadays? Seriously, all they did was make everything look green. It is absolutely ridiculous to watch & an insult to the audience as well. And since a lot of it takes place in the evening we get a whole lot of green scenes. Thirdly, don’t call your movie “Paranoid Activity 2” when there was never a “Paranoid Activity”. This is a blatant attempt to make people think they missed out on a previous film that never existed in the first place. It’s a cheap & dishonest way to make people notice your film. Bad enough you’re already ripping off “Paranormal Activity” to start with. maybe attending film school before you attempt another celluloid atrocity might help. You might want to hire a writer to write your script as well next time out. Mumbling into a camera does not a script make.

I also found out that “Jonzi” was played Manzie Jones who also wrote & directed this garbage. No wonder he gets so much screen time. He always puts the camera down in front of him so as to be in practically every shot. What a loser. He has no discernable writing, directing or acting skills. What he did have was a camera & some friends to make this tripe. I would like to think they all dropped him like a hot potato once they saw the final product. There are no redeeming qualities in this film to speak of whatsoever. It is not worthy of being placed in your DVD player. I’m actually throwing out the player I watched this in. It’s been infected by this mess of a movie & is of no use to me anymore. Manzie Jones owes me a new DVD player as far as I’m concerned.

I’m sure it’s no surprise that “Paranoid Activity 2” gets zero shrouds from The Black Saint. As a matter of fact I’m giving it a -5 shrouds score. It’s that bad & the worst film I’ve seen this year by a country mile. It certainly can’t get any worse than this…can it? Let’s just hope they take my advice & not make any more films. I’m sure Burger King is hiring somewhere Mr. Jones, go flip some burgers or something. Actually I don’t care what you do as long as you’re not making movies anymore. Take my advice dude, do something else. For pete’s sake do something else… 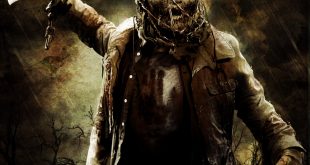