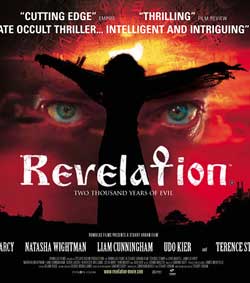 Since A.D. 50, a mysterious sacred artifact known as the Loculus has been at the center of a bloody clandestine war. Missing for a few hundred years, the puzzling relic has suddenly reappeared in the present day, bringing with it a terrible secret that could spell doom for all of mankind. Now it’s up to Magnus Martel (Terence Stamp) to subvert a murderous secret society and uncover the truth behind the ancient treasure.

Revelation is a 2001 thriller starring James D’Arcy, Natasha Wightman, Udo Kier, and Terence Stamp. It’s about an ancient box (known as the Loculus) dating back to Christ that’s been fought over throughout the years. People have been killed because of this box and in present day, Magnus Martel (Terence Stamp) tries to get the box destroyed. When that fails, he sends his son (Jake Martel, played by James D’Arcy) clues to where it is as well as some money.

The movie opens up with the box being created during Jesus’ death. The movie then cuts to 50 A.D. and 1299, both times people try to unlock the box’s secrets, only to end in disaster. The movie then cuts to present day. Magnus has been studying the box and trying to get his son (Jake) involved while trying to make amends with him. (He even offers him money!) His son’s mother (Harriet Martel, played by Celia Imrie) tells him not to do it, but he gets angry and does it anyway. During this he meets the beautiful Mira, (Natasha Wightman) who is also working on this case. The box has been sent away to be destroyed, but the man who was supposed to do it gets murdered. Later on, everyone else involved in the case gets murdered except for Jake and Mira. Before his Father’s murder, Jake was asked by him to find the box and destroy it. He’s got clues to it and money to get along the way. Now Jake and Mira must destroy this box before it does any more damage!

Although the movie has a great cast, it’s not good at all. It reminds us of the Da Vinci Code’s first draft. (This movie was made before the Da Vinci Code was.) It’s very similar. With that being said, this movie is very slow, boring, dull, and never really seems to take off. Why should we care about this box? The movie never tries to make us care. It just gives us one fact more boring than the last about it. It’s like we’re in history class all over again. Bored and forcing ourselves to pay attention.

Let’s say you’re going to write a thriller. First thing you need is bad guys. Then you need something the bad guys will brutally murder for. Then you need a way to place a reasonably non-murderous everyman character into the middle of the plot. Enter Stuart Urban with his optimistic insight into the second coming. You see, Christ’s DNA was left intact on the nails of his crucifix, and with the proper medical training it’s only a matter steaming and scraping it off to create a clone, presumably using the the complete DNA of frogs to fill in the sequence gaps. Imagine if this power falls into the hands of the Catholics.

The presentation of human nature in movies like this is sad. How much longer before we get a movie based on the song “One Tin Soldier”? Have the movie establish from the start that all the stone says is ‘Peace on earth’ and then watch groups of people slaughter each other over it. Would that fall under horror or comedy? Sometimes we can’t tell the difference.

Well whatever, there’s a movie going on and a bunch of stuff is happening. If the plot holds together, it doesn’t matter (and it’s highly unlikely that it does). Terence Stamp is a fine actor and he could recite the card catalog and make it seem important. Perhaps he should have read out the script as an audio book instead of playing Basil Exposition in only the first act. Likewise, Derek Jacobi almost breathes life into his cameo, but too soon we’re left with expendable characters in expendable circumstances. The National Treasure series, which is cut from the same cloth at least covers its tracks with self aware wisecracks and characters of at least two dimensional charisma. Revelation is a guided walking tour that nobody really wants to go on. Do yourself a favor, skip the tour, sleep in and grab a late breakfast. You’re not missing anything. 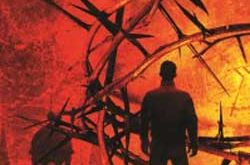