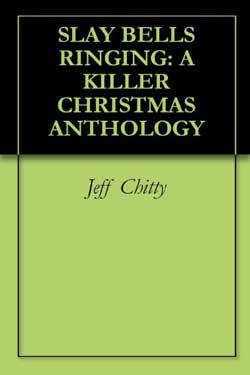 Slay Bells Ringing is an anthology of Christmas-themed horror stories, most of which were written by first-time published authors. This is definitely not an anthology for children to read; quite a few of the stories were extremely violent or contained explicit sexual situations.

Although some of the stories were good, the editing of this anthology needed a lot of work. Every story had typos, spelling and grammatical errors, and some even had sentences that made no sense at all. These mistakes took me out of the stories and made them difficult to read. A few of the titles had spelling errors, as well as the biographies of the authors.

The first story, “From Santa” by Clint Finned, is about a man whose wife and son have been killed by creatures that looked like stuffed animals and had been sent in the mail with a note “from Santa.” However, these are not cuddly creatures by any means. This story had a lot of potential, but unfortunately, the writing itself missed the mark. The author switches from past to present tense throughout the tale, and using the first-person voice, especially in regards to the ending, was not a good decision.

“The Confession” by David M. Simon, takes the evil Santa meme and gives it a different twist, with Santa as a murderer. He doesn’t kill kids, until he no longer gets his jollies out of killing the homeless. This was a good story; I enjoyed the imagery which was gross at times, but the last line of the story could’ve been left out and the tale would’ve been a little better for it.

Jeff Chitty, who is the editor of this anthology, also includes his story “Black Friday.” A man takes out a bunch of late night/early morning Black Friday shoppers with a gun, something we’ve probably all thought about while stuck in a crowd of nutty bargain hunters. However, the massacre doesn’t turn out the way he had hoped. “Black Friday” is one of the strongest stories in Slay Bells Ringing, although it had several spelling and grammar errors as well.

One error I noticed that was common in several stories was the spelling of Santa Claus. It was often spelled “Santa Clause,” an error that should not be prevalent throughout a Christmas anthology.

“A Little Time in Cab 9” by Ken Goldman is an interesting story, but it’s not a Christmas story. Christmas is mentioned, but “A Little Time in Cab 9” doesn’t really incorporate a Christmas theme throughout. Charlie is a cab driver whose cab has been involved in murders. Charlie is being talked to by the narrator, egged on to murder again; however, it’s never made clear who the narrator is. Is it Charlie’s mind, or another cabby? Or maybe the cab itself? While well-written, the story is a bit confusing.

“Satan Claus” by Tom Hamilton is a fun story that combines Santa with zombies. Seymour takes care of his elderly mother, who suffers from dementia. She tells him she was bitten by a man in the backyard, but Seymour doesn’t believe her. She shows him the bite on her arm, then dies a while later. Seymour is devastated and calls his sister, when suddenly Mother sits up and bites Seymour. Thankful she is alive, although disconcerted at being bitten, he goes to his job, which is dressing up as Santa at the mall. Chaos ensues. This story was engrossing enough and action-packed so that the few typos in the story didn’t take me out of it. “Satan Claus” is also one of the strongest stories in the anthology.

“The Night the Elves Killed Santa” by Crowerd Robinson takes the evil elf meme to another level when all of Santa’s elves band together to kill Santa, who is portrayed as a slave driver to his workers. The story started off strong, but fell apart towards the end with the elves’ plan for Santa’s genitals, which the elves had violently removed from Santa’s body.

“Fervor: The Diary of Reverend Jerimiah Jones” by Annaleigh Josephs first leaves me wondering if “Jerimiah” is a misspelling by the author or the editor, or if the author just decided to spell “Jeremiah” differently. Again, the Christmas theme is not strong in this story; a reverend, who is crazy religious takes note of a new woman in town he suspects is not pious. In his mind she is guilty of several incidents in the town that would prove her to be a wicked woman and he takes matters into his own hands. But is he truly insane, or is the woman actually a witch? “Fervor” is well-written, and in the author’s notes it is stated that “Fervor” will have two follow-up stories. I’d be interested in seeing the sequels, because although somewhat predictable, the story was a good one.

“All the Creatures Were Stirring…Even the Mouse” by Thomas Scopel is another evil elf story, this time with one rogue elf who is pushed over the edge when he is once again told by Santa that he can’t accompany Santa on his Christmas Eve journey. He goes on a murderous spree that would make Ted Bundy jealous. Tiedo’s methods of disposing of his perceived enemies are quite imaginative, and his poor victims even include innocent reindeer. “All the Creatures” is a well-written story that gives a nice twist to the usual “evil elf” meme. The title page for the story did have a very glaring error – “creatures” was unfortunately typed as “creatuers.”

“What You’ve Always Wanted” by Shirley Keene uses the common men’s fantasy of making love with two women and turns it into an erotic Christmas tale of sex and death. This is the most sexually-explicit tale in the anthology, and it’s written extremely well. Cheryl greets her husband Carl in a skimpy nighty and proceeds to pleasure him in ways that drive him crazy. His real Christmas gift, though, is his wife sleeping with another woman and letting him join in. Although he has the best night of his life, it doesn’t turn out well for him. “What You’ve Always Wanted” is another story that would’ve fit in well in the “Hot Blood” series; it’s a smutty story, and a fun one as well.

The final story, “St. Nick vs. the Home Invaders” by Ed Frankenlauter, puts a happy family square in the middle of their worst nightmare on Christmas Eve – a home invasion by three psychopaths. After the husband is killed and the mother beaten and almost raped, the little boy wants desperately to save his mother, but knows he can’t. However, rescue comes from a most unexpected visitor. “St. Nick” is a fun read, although very violent, but it has a happy ending, rare for such stories.

Slay Bells Ringing is a decent anthology with some good stories, but again, it would have benefited greatly from a professional editing.