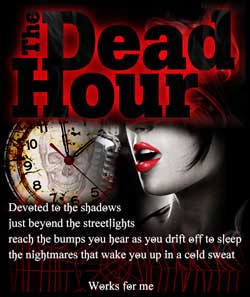 DJ Raven wants to know. She hosts The Dead Hour, a weekly radio program devoted to the shadows just beyond the streetlight’s reach, the bumps you hear as you drift off to sleep, the nightmares that wake you up in a cold sweat. She brings these to you, one horrifying tale at a time.

Growing up I remember staying up way too late to watch Tales From the Dark Side. Something about the intro, with the creepy tree and the Vincent Price like voice over would just thrill me to no end and I would watch riveted to the television regardless of how tired I was. It was probably the one show that got me fascinated with all things scary. Since then, I’ve been drawn to any kind of horror anthology they could throw at me, Trick or Treat being the most recent enthralling experience. Now there’s The Dead Hour.

The Dead Hour (www.thedeadhour.com) is a series of five webisodes nestled in the warm blanket of a radio show. DJ Raven (a clear homage to Lynne Thigpen’s legendary performance of the DJ in The Warriors and tantalizingly portrayed by the sultry Melissa Holder) acts as the Serling-esque (or Crypt Keeper-esque, if you prefer) host of the program, setting the mood and the hook for the episode that follows. While comparisons to The Twilight Zone are inevitable, I believe it to be far more similar in content to Fear Itself; the subject matter is much more creepy and scary than weird and surreal. Each entry checks in at about fifteen minutes, making them easy and convenient to watch. It’s like watching a really good short story. All the episodes are entertaining, but in different ways.

Donor is kind of tongue-in-cheek but with a real message, Alcoholic Vampire & Cougar are fun takes on traditional monster stories, The Hole is an excellent psychological thriller, and Cannibal Girls is an ambiguous look into the future of post-apocalyptic Earth. As you watch them in order, it feels like the producers are gaining momentum with the project as, by the time you hit the final two, they get more serious and cerebral both in the storytelling and film making. I hope that trend continues into the next season.

The creators of the series are Daniel B. Iske and Scott Coleman, the veteran no-budget filmmakers that brought us the award-winning films The Wretched (2007) and New House (2005). Consequently, all the episodes are well produced, despite having the self-proclaimed “no budget” tag. They are even good enough to include a “Behind the Scenes” feature for all the aspiring filmmakers out there interested in learning from their vast experience in the independent film world. It’s refreshing to watch people who are good at what they do get so much joy out of doing it solely out of “the desire to tell a good story”.
And that’s exactly what they provide: good stories with, more importantly, good storytelling.

Here’s a brief summary of all the webisodes you can find on the site, which, by the way, is beautifully presented in its simplicity, easy to navigate, and has none of the buffering issues one might expect at other sites with media content. Bravo, Dead Hour peeps.

Donor
Seth is unemployed, out of money and out of options. This episode is a poignant allegory of the hardship brought on by the recession and the things one man will do for his family’s well-being. More than I would. Let the baby eat ramen.

Alcoholic Vampire
What do you get when you have the physiological need to consume human blood combined with a substance abuse problem? A Bloody Mary with a distinct aftertaste of copper. Vic is having trouble with his vampire nature and offsets it with libation. It could be worse Vic buddy: you could be all glittery.

Cougar
The universal appeal of a cougar in the neighborhood is undeniable for high-school boys (and most grown men for that matter). Cougars have one thing that their lovely teenage female classmates don’t: Mad skills. Experience. They really know how to shine the shoes, if you catch my meaning. Unfortunately for these teenagers, Miss Juniper’s skill set is a far cry from what they’ve seen on Dad’s secret stash of DVD’s.

The Hole
Arthur is a veteran workaholic with too much time on his hands. While doing some yard work he makes a gruesome discovery and obsession soon over takes him, but to what end?

Cannibal Girls
2012 approaches as does the end of humanity as we know it. Everybody has a take on the events of Dec 21, but only a few have one on the aftermath, of that particular day anyway, and it’s never a good time. Under-cooked chicken will only get you killed. Under-cooked human turns you into something worse than humans who eat humans…or something.

The Dead Hour is a welcomed addition to the horror anthology realm. Well written, well produced, and addictively entertaining, I’ll be looking forward to the next season to watch whatever DJ Raven has in store for us. 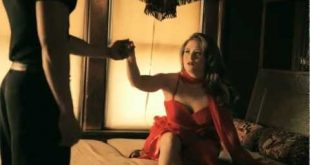