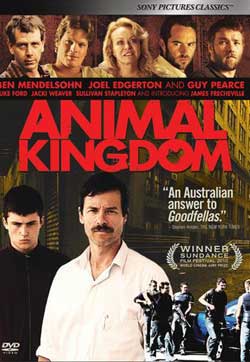 The story of seventeen year-old J (Josh) as he navigates his survival amongst an explosive criminal family run by a deceptively cruel matriarch and the detective who thinks he can save him.

It’s been a long time since I’ve offered my blessings to all of my fervent acolytes here on horrornews.net. The Black Saint would offer his apologies to all of you but as I was about to apologize I remembered, “I’m The Black Saint. I don’t apologize to anyone”. So that’s out the window but I guess I should say that sometimes life catches up to you no matter how fast you’re running & it caught up to me. But no worries, I’m back and I’m still in black children.

The movie I’m returning with is called “Animal Kingdom”. It’s a sort of Aussie “Ma Barker & her boys” tale, complete with the manipulative mother & her criminally minded brood. I just want to say it right now..the movie is a complete winner that needs to be seen. It’s certainly not a horror film but it tells a horrible tale of an amoral family & the lives they ruin during the course of the film.

The film starts with a teenager (James Frecheville as Josh) sittting on a sofa with a seemingly sleeping woman while passively watching television. All of a sudden EMS shows up at his door & we find out that the woman sleeping next to him is his mother & she isn’t sleeping, she overdosed on Heroin & she’s dead. Right off the bat we, the audience are interested in Josh because of the way he’s reacting to all of the commotion going on around him. He just sits there staring at the TV, no hint of emotion crossing his face. I was fascinated and the movie was just 3 minutes old. It’s at this point that Josh (or J as he’s referred to in the movie) starts narrating his story and it’s here where we meet his family & realize the peril he’s in. He starts by telling us that his mother kept him away from her family because she was scared. He then introduces us to his mother’s family: Uncle Darren, Uncle Craig (who’s constantly hopped up on drugs) & Janine “Smurf” Cody, his grandmother who he claims “Just wanted to be wherever her boys were”. In addition, family friend Barry “Baz” Brown is also introduced. All of them are bank robbers & drug dealers who are under constant surveillance by the Armed Robbery Squad. But while the squad is watching J & his family on a daily basis, they’d really love to have his other uncle. Uncle Andrew (known as Pope). Pope is in hiding because of this & only makes himself seen when he needs to communicate. The entire family is comprised of thieves & drug addicts & young J goes to live with them because there is nowhere else for him to go. As he puts it, “After my mum died this was just the world I got thrown into”. 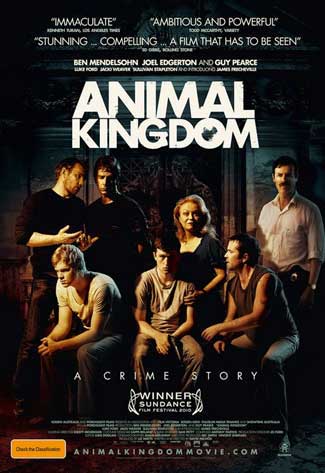 As you might have guessed, J slowly starts to become enmeshed with his family’s shenanigans. It’s interesting to watch because J is oddly impassive for most of the movie. It’s never mentioned but I wanted to believe he had a bit of a mental issue. His face seems…off for the entire film. As if he doesn’t know who he is or how he got to where he is. He’s literally a blank piece of paper. During the film he has to be taught things like how to wash his hands after using the bathroom which suggests that he’s a bit slow perhaps. That would explain his utter ignorance of everything that’s going on around him. He basically just sits & watches everyone else go about their business & he doesn’t speak unless he’s spoken to first throughout the film. Baz seems to be the only uncle who takes a vested interest in him & Baz is actually not a bad sort. He wants to get out of the business, play the stock market a bit & live a peaceful life.

The others want to continue living the lives they’ve made for themselves. And there’s always the specter of Pope to watch out for as well. Pope is played by Ben Mendelsohn in an absolutely smashing performance that takes the picture to another level. Pope is a sociopathic, homicidal maniac that hides all of this under a completely emotionless facade. He’s actually one of the best screen psychos I’ve ever come across in all of my years of movie watching. There is a scene in which, after a clandestine meeting with Pope in a supermarket to exchange contact information, Baz is shot & killed by the Armed Robbery Squad & Pope (who was walking away at the time) turns to see that his brother has been shot & wants to run over & help him but knows he can’t. He realizes that his brother is dead because of him & his anger is boiling over as he watches the carnage but he can’t help Baz lest he get himself captured. Mendelsohn’s performance is the best I’ve seen in a movie in a long time and it’s a shame that he wasn’t recognized for it (more on that later). 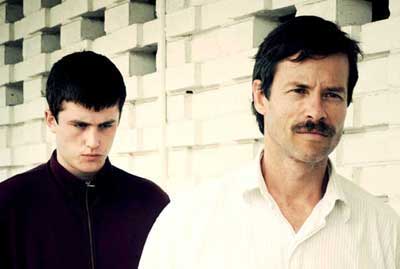 At this point in the film, Pope takes over. He’s still in hiding but it’s more of a “Hiding in plain sight” sort of situation. He is taking charge of the operation & is looking for revenge against the cops who killed his brother. He is out on a mission now & nothing is going to stand in his way. And all the while Mama Smurf is in the background, just making sure to tell the boys they are loved. She doesn’t actually participate in any of their activities but she is most assuredly aware of them & certainly seems to condone their lifestyle (she creepily always asks them for a kiss when they enter or leave the house & kisses them with a odd bit of passion right on the lips each & every chance she gets). Throughout all of this J remains impassive, just watching & doing as he’s told. In retaliation for his brothers murder, Pope & the others kill 2 policemen. He’s eventually caught & arrested along with Craig & Darren & J who just happens to be in the house when it gets raided. J is interrogated by detective Leckie (Guy Pearce) & this is where mama smurf takes over & the boys slowly start to fall apart. We also find out that Pope is on some medication that he hasn’t been taking as of late. This would explain why he seems to be getting more & more eccentric as the film progresses. He asks a lot of questions about his brothers sexuality & seems to have taken a shine to J’s girlfriend, Nicky (Laura Wheelright).

“Animal Kingdom” (great f*cking title by the way) reminded me a lot of Scorcese’s epic “Goodfellas”. With it’s narration by J during the film & it’s absolutely throat grabbing opening scene, it’s a film that drags you in & although a bit talky at first, it’s never boring. You’re emotionally invested in J as soon as the film begins. You become attached to J’s family because all of them are so interesting, bad guys or no. And I’ll take an interesting bad guy over 10 good guys in a second. Writer/Director David Michod shamelessly borrows from the Scorcese handbook but he does it with a muted style that doesn’t offer any of Scorcese’s bombast or epicness. “Animal Kingdom” achieves a lot of what sprawling crime epics like “The Godfather” & “Goodfellas” achieved, just in a far more intimate fashion. The film also seems longer than it actually is but in a good way. As I said earlier, it’s a very talky film, especially when Pearce’s character is introduced & J goes into protective custody to shield him from the family he’s going to testify against. But it’s never boring & the sudden jolts of violence that occur in the film are both shocking & unexpected.

“Animal Kingdom” begins to show us the slow disintegration of the family about a third of the way through. As the police tighten their grip on the family, they start to panic & Pope just gets more & more homicidal. But all the while, he never wears his heart on his sleeve. His impassiveness during his homicidal acts is one of the most frightening things I’ve ever witnessed in a film. I thought I’d seen the ultimate psycho in last year’s “Bereavement” but I think Pope has got Graham Sutter beat. By a country mile. And all the while, Mama Smurf is watching. Watching & listening. She makes her presence known & her influence felt when she needs to impose both of them. Although she never actually participates in any of the crimes she is aware of what her sons are into & she will not let her sons rot in jail, no matter what the cost.

She knows a lot more than she’s letting on & as she tells one character midway through the film “I’ve been around a long time” & as J finds out not even protective custody can really keep him away from her in the end. Obviously I can’t go into how he whole thing ends up but it does end in a very satisfying manner. Suffice it to say that J isn’t as dumb as he looks is all I can tell you. Oddly enough I watched “Animal Kingdom” last night not being aware that the Oscar nominees had been announced earlier that morning. Much to my surprise & delight, Jacki Weaver got a Best Actress nom for her performance as Mama Smurf. As glad as I was to read this, I still wondered where was Ben Mendelsohn’s nom for either best supporting/best actor? His characterization of Pope is a performance for the ages quite frankly. It would be a completely different movie without him in the role & it’s a shame he wasn’t granted a nod by the academy.

“Animal Kingdom” is the first film of the new year I’m honoring with 5 shrouds! I don’t think I’ve ever given a film so high a recommendation, let alone a non horror film. But the term “Horror” can be a subjective one couldn’t it? One man’s horror film might be another man’s real life situation. And we certainly don’t need any fictional monsters in a movie to make it a horror film do we? There’s plenty of real life horror going on right in front of us everyday. We just don’t see it until it affects us personally. “Animal Kingdom” is that kind of horror film and it’s a great one. See it now!