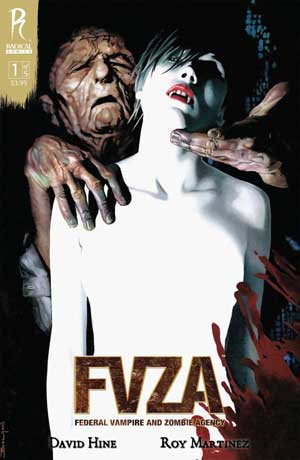 Fedral Vampire and Zombie Agency is the newest release from Radical Publishing and i have to say its one of their best and quite possibly one of the best horror comics ive read in awhile next to The Walking Dead and The Goon. It was written by David Hine and illustrated by Roy Allen Martinez and it was inlfuenced off the real website of FVZA.org

The comic starts with a character named Landra who is seen dragging an old man in the desert to kill him with a pistol, but it turns out to be her grandfather Dr. Hugo Pecos. After that we don’t really know if she shot him or not because it then shifts to a flashback of Landra’s childhood with Dr. Hugo Pecos teaching her and Vidal the history of the Vampire and Zombie infection ever since it started back in the 1800’s and the country formed the FVZA: Federal Vampire and Zombie Agency to destroy and contain the vampire/zombie infection. In the comic the vampire and zombie source of the infection is treated like a disease and its not like an average supernatural or voodoo type source on how it got started.

I really liked that angle treating like a disease and getting away from the natural stuff in storys like this, and its kinda what 28 Days Later did for the zombie genre by making them infectious dangerious beings then actual zombies. So yeah Dr. Hugo Pecos teaches his young students about the history of vampirism and zombism since the cowboy western era all the way to the Nazi Holocaust era with the Nazi’s experimenting with the vampire and zombie infection on the prisoners, but the FVZA knew of this and eleminated the whole camp by flaming them with flame throwers to contain the disease.

Every page you turn just has great artwork and just hits you with a bang with awesome horror art with great colors, that they almost pass as horror portraits. Anyways then Dr. Hugo Pecos sworn if the vampire/ zombie infection ever happen again he would contain and be ready for it since hes training his young students Landra and Vidal in the best forms of combat and martial arts and educating them on the history of the zombie and vampire outbreak with pictures, reports,
and videos.

I dont want to give the rest away, but after that beginning all hell breaks loose with a new infection of the zombie and vampire disease starting up again in L.A. ever since it was wiped out from existense in the 70’s. Were are introduced to two new characters one of them an age old Vampire. The comic is very good because it takes no punches in the gore and nudity department and the story is just as great to.

Also in the comic in the back is an exclusive interview with David Hine thats very interesting and a preview of Radical’s upcoming crime epic called Last Days of American Crime by. Rick Remember and Greg Tocchini.