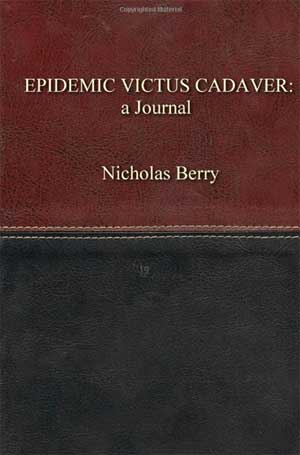 Zombie stories are everywhere you look now days. Seriously, to the point that the relatively new genre of “Zombie Fiction” is all ready developing it’s own sub-genres. One of the most popular types of zombie stories right now is the blog/diary format. As with any sub-genre there are both fans and detractors of the style. I classify myself as a fence sitter in the matter as I enjoy the intense views and feelings presented from the sole point of view as their world falls apart around them but I do miss out on things like good present tense action sequences (I feel they flow better) and good old fashioned multi character development. Please keep in mind those things are, of course, my personal preference.

The journal that makes up Nicholas Berry’s Epidemic Victus Cadaver was purportedly found in a solid iron caste ( I have got to get me one of those) that survived an intense fire in a farm house a few short miles from a near by, blood soaked, and abandoned town. There are notes describing the condition of the journal and several entries have editorial comments that explain the state of them (ie, dark heavy pen strokes tear through the pages as if written with great force or feeling or certain words will be repeated over and over and the editor makes note to keep you in the loop).

Epidemic Victus Cadaver opens with a note explaining the journal you are about to read is the sole piece of evidence from the aforementioned bloody yet vacant town. The journal starts right in with a panicked entry from the nameless author in which he describes people walking, shambling, or crawling through the fields around his secluded farm house. I started feeling a little lost as within the first few entries I got the feeling the dead have been walking for a while because the journal keeper (as he shall be referred to as from here on out) appears distraught and desperate for company; resulting in the keeping of the diary. We learn that the young journal keeper is waiting on his sweet heart, who was out when the dead started wandering the area.

Alone with the journal and his scrappy dog, Rusty, the journal keeper works to fortify his house against the slowly gathering dead. Our dedicated journal keeper manages to get a radio signal from a near by station and he reports about the stranded DJ’s constant broadcasts. Somehow the DJ came across a set of cassette tapes that actually prove one of the coolest parts of the book as they are recordings of a doctor’s various experiments with the dead and the living. The DJ and his disturbing recordings are over suddenly and our hero is back to work, now armed with the knowledge and certainty that the stinking stumbling humans outside are really zombies. Before loneliness can sink in to much a scared woman pounds on his door seeking shelter from the dead and first aid for a nasty bite she managed to get. Our kind, yet slow-on-the-up-take, journal keeper attempts to help the poor doomed woman with whiskey soaked rags and tourniquets. Before too long the inevitable happens and our journal keeper is alone again with the moaning dead trapping him inside his house.

Now at this point the narrative kicks into over drive as journal keeper loses his mind to the sound of the moans. Mr. Berry captures desperation and madness beautifully as the journal keeper writes his thoughts even as the weight of insanity and fear wound and crush them. You feel the climax coming as the dead advance past the houses defenses, pushing the journal keeper deeper into his house. An under current of madness carried me right to the end I knew was coming.
Epidemic Victus Cadaver doesn’t change my position on my fence post sitting but it has sparked my interest in Nicholas Berry. In short if you know you enjoy zombie stories written as journals then you will surely enjoy Epidemic Victus Cadaver, as it has they great zombie gore we all expect plus an extra dose of madness. However, it is what it is and not everyone likes the style it is done in. I’m not hacking anyone, just trying to be honest.