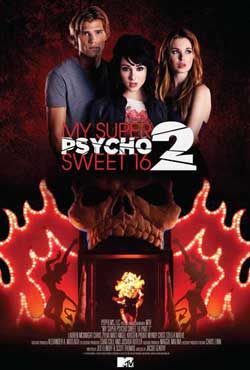 Skye flees town after her father’s murderous rampage resulted in the deaths of many of her classmates and heads to the town where her birthmother lives. Upon arriving at her mother’s house she discovers that she has a half sister named Alex and they become pretty close in a short period of time. Just when it starts to look like Skye may get to live a normal life her psychotic father tracks her down and starts killing those around her once again. Alex ends up throwing a huge party at one of her father’s clubs but it isn’t going to be a night of fun at all as Skye’s dad crashes the party and begins killing everyone he comes across. Will Skye and Alex be able to survive or is this the last party either one of them will ever attend?

I had actually heard about “My Super Psycho Sweet 16” a few months ago but I never saw it. I dismissed it because I thought to myself Hey, it’s a MTV movie! How good could it possible be? I assumed that it was just a “Scream” rip off with a bunch of annoying teen actors in it so I never took the time to watch it when it was on (and it was on quite a bit, good ole’ MTV does like to run their movies over and over again about 900 times). After watching “My Super Psycho Sweet 16: Part 2” (man, that’s a mouthful!) I’ll be the first to admit that I was wrong and if the first one is anything like the second one, I really need to sit down and check it out sometime. I really liked the second one a lot and was really surprised by how good it was.

I had a blast with “My Super Psycho Sweet 16: Part 2” and I think a lot of other viewers out there will too. It had a nice R.L. Stine “Fear Street” feel to it and being a huge fan of Stine’s work I approve. It was well-written, had likable characters, and in my honest opinion it was about 100 times better than any of the “I Know What You Did Last Summer” movies combined and was a lot more watchable than some of the most recent “teen” horror flicks such as the dreadful remake of “Prom Night.” Hell, I would even go as far as say that it is better than any of the “Scream” movies as well (I will never be confused as being a “Scream “ fan, those films almost ruined the slasher genre in my opinion). This movie is a nice little slasher flick and if you have teenagers in your house who are just getting into the horror genre (or if you are a teen yourself) then I would suggest you give this movie a shot.

I was honestly surprised by how graphic and violent this movie was. There was quite a bit of blood and gore in it and I for one was happy about that. We are treated to some pretty cool death scenes too, and the highlights include a girl stabbed in the back of the head with an electric knife, a dude chopped to bits with a meat clever, someone is beat to death with a meat tenderizer, someone is set on fire, and we have all sorts of nasty stabbings (one in which involves a board with nails in it hitting someone in the neck). There is no lack of violence to be found here, and while I was expecting most of the deaths to take place off camera that just wasn’t the case here. I applaud the filmmakers for not being afraid to make this movie as graphic as they could considering it is a made for cable movie, and as a guy who loves his gore I totally approve.

I really liked the cast a lot as well (which was a shock to me as before I watched it I totally expected to hate everyone in the movie). Lauren McKnight is a real cutie and she does a wonderful job in the role of Skye. This girl can act and I see some big things in her future (I know that there is talk of a movie being made based on the comic book series “Hack/Slash,” and if the makers of that film are reading this please, please, please consider Lauren McKnight for the part of Cassie Hack as I think that she would rule in the role). Chris Zylka is good as the concerned love interest for Skye, and Kirsten Prout is well-cast as Alex. I also really liked the bitchy character of Zoe (Stella Maeve) and thought that she owned every scene that she was in. Alex Van is pretty convincing as Skye’s homicidal father and pulls off playing an unstable nutcase quite well (I thought that he kind of favored Crispen Glover a bit as well). He obviously has fun with the role and seems to enjoy slaughtering innocent teens. He is one of the best things about the movie and in a way I couldn’t help but feel a little sorry for him since he obviously really does care about Skye.

I grew up watching slasher flicks and in my opinion there hasn’t been a good one for teenagers for almost twenty years now (other than the “Hatchet” movies, which rule, but they are a little too hardcore for most teens I think). “My Super Psycho Sweet 16:Part 2” is one hell of a slasher flick and I would recommend it not only to teenagers, but to anyone in general. I had a great time with it and loved the fact that the ending leaves things wide open for yet another installment. Check this movie out when you get a chance, I think that you will really enjoy it. As for me, I’m off to find the original “My Super Psycho Sweet 16” now…