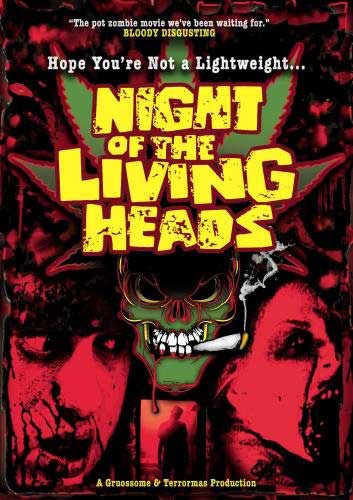 A mysterious strain of marijuana has hit the streets in a quiet, suburban neighborhood. Dave, the local pothead plans to throw a party with large amounts of the mysterious weed, known as “Voodoo”. Can everybody handle this high caliber chronic or will they fall victim to the night of the living heads?

Ok people, the saint is in a foul mood today. Actually I’m usually in a foul mood but today it’s even more foul, more morose than usual. Why? Well you know the saint does have business concerns of is own to keep track of & it seems that some less than reputable companies have been dipping into my vault & partaking of some of my hard earned lucre. Filthy lucre to be sure, but my filthy lucre…not theirs. So I had to spend the better part of this morning on the phone cursing out a lot of “customer service” clowns that barely spoke English to get my sh*t rectified & back into the vault. One thing I don’t take lightly is fools playing with my money…

But the situations have been rectified except for one (Nuance America look the f*ck out) and I have a review for a little ditty called “Night Of The Living Heads” for you. Now, if you’ve read the synopsis (and actually even if you didn’t) I’m pretty sure you know that the movie is about some really f*cked up weed called Voodoo. Voodoo is some f*cked up weed that doesn’t just get you high, it gets you hungry too. Not the usual munchies one would get after dragging on a spliff for a while either. It gets you hungry for human flesh!

First off let’s talk about the writer/directors of this flick. George A. Taramas & Michael Gruosso made the film on an estimated budget of $3000 dollars on their own with their friends & family pitching in to get it done. I met the both of them at the NYC Horror Film Festival last year & they were two young earnest filmmakers who knew they weren’t making history with this movie but were proud of it all the same. And you know what? They have every reason to be proud of their film because it is a very entertaining movie with some laughs, some halfway decent acting, some pretty fair gore splattering to & fro & of course….lots of smoke. Pretty much every scene in the movie features someone getting high, talking about getting high or getting eaten by someone who took a toke of the mysterious voodoo weed.

Our protagonists are getting ready for an event they call “Smoke Fest” and they’re getting ready to purchase some hard core weed for the event. They get it from a Jamaican who comes to their home straight from the “Motherland” to sell them some good sh*t. He has a briefcase with different types of weed to sell. “Blue Magic”, “Ganja Gold” & “Fresh Fire”. All of which he says will give them the necessary high they’re looking for. But they take notice of a strange looking weed that he doesn’t present to them formally. Asking what it is, he tells them that it’s called “Voodoo”. It’s kept in a glass box not in a baggie like the others. He tells them it’s a very special weed that comes out of the ground “when it wants to”. He then proceeds to tell them the legend of the weed.

It seems that a very long time ago in a village back in Kingston, Jamaica there was a family that had a prosperous farm. Their crops grew very well each and every year. This was due to the fact that they practiced black magic & made sure their crop was plentiful year after year. As always in these sort of stories, the white man came a knocking & took over the land. Making the owners of the land their slaves they commandeered their land & their crops and made the former owners work the land. In time, the ground became barren & the crops died, never to return. One night, one of the white men came upon the slaves performing black magic. Believing this to be the cause of the sudden death of the crops, he had them hung immediately. Then the remaining family members were forced to bury them deep in the barren soil. Miraculously, a short time later the crops returned bigger & better than ever. One day while inspecting the crops, one of the men discovered a type of tobacco he had never encountered before. He promptly picked some & rolled up cigarettes with his partners to celebrate. They were found dead the next day. Torn to shreds, but by whom? The rumor was that it was the weed they partook of earlier. The weed that was cursed by the people who were hung & buried on that same land…

One thing for sure..the weed is hardcore sh*t & the salesman warns the buyers that it’s only for the real rasta’s who are “strong & pure”. Not for the “weak & sinful” like the outsiders. When he tells them that voodoo has been known to make people act “funny” sometimes he is asked by one of the stoner’s “You mean eat a lot & act stupid”? He smiles sinfully & responds “Yeah. Something like that”. The story of the origins of the weed is told through some limited but effective animation which impressed me considering the budget of the film. Of course they decide to buy voodoo for their smoke fest. They get an ounce of it not knowing what they’re in for. And all the while the salesman is smiling at them demonically.

Now all they have to do is get everybody together for their big smoke fest & party down. The guy who buys it takes it home with him for safe keeping & after a short argument with his girlfriend gets up to go to the bathroom. While he’s using the facilities, she finds the weed & pinches off a bit for herself. He leaves & she promptly calls another guy to come over & smoke with her. Meanwhile he is out selling some of the devil weed to make some money while keeping some for himself for the big party. So slowly but ever so surely he is spreading voodoo all over the town. Big f*cking mistake…..

As you can probably guess, soon all of the local stoner’s either have some of the voodoo or are planning to go to the smoke fest to go up in smoke. Some of it is even confiscated by the police who promptly decide to smoke it up on their own. Some is found by one of the stoner’s parents & is taken from him for their own use as well. The sh*t is getting around…all around. I’m pretty sure you’ve figured out by now that once the sh*t is smoked, they turn into zombies who aren’t looking for another hit, they’re looking for another bit…of human flesh. And since they’re all together when they start smoking, they start feasting on each other.

“Night Of The Living Heads” isn’t a great movie by any means. It’s not even a very good one actually. Some of the actors are just awful & the cinematography in some scenes is so dark you can’t tell what’s going on in some scenes at all. It could’ve used a little more nudity as well. The saint isn’t a horndog at all but it seems to me that if everybody in the movie is getting high there ought to be a little f*cking going on as well. But all we get is a quick shower scene. Either way, the cast is enthusiastic if not especially good & the movie slows down a bit in the middle but once the smoke starts to waft across the screen, so does the gore. And the special effects might not be all that “Special” but they get the point across pretty well. Whaddaya expect for $3000 anyways?

In all honesty I have to give the filmmakers credit. They made a decent little movie that has some laughs & some gore in it. The cast is enthusiastic if not especially good actors. They even have a soundtrack cd available with some pretty banging tunes on it. How they pulled that off on their budget I don’t know but they did it and a lot of “filmmakers” couldn’t do that on that low of a budget.

And you know what? Even though the ending was sort of a forgone conclusion at some point in the film for me (You watch as many movies as I do, you can kind of guess how they’re going to end most of the time, Especially zombie movies), I was actually a teensy weensy bit creeped out at the end of this one. Don’t ask me why…I just was. But that’s a good thing as far as what the filmmakers were trying to achieve. If it creeped me out a little it’ll probably do the same for you.

Unfortunately, I haven’t seen this film listed anywhere online except for the official website. It’s not on netflix, blockbuster, it’s not even listed on imdb.com! And that’s a shame because everyone who was involved wit this movie should be applauded for their effort & the final product. Like I said, it ain’t gonna win any Oscars or anything like that but it’s fun & has it’s heart in the right place (until someone ate it). The official website is NOTLH.com. You should check it out for a hot minute at least. I’m not saying buy it or anything like that. But you might see something that interests you enough to do just that.

All in all, the black saint is giving “Night Of The Living Heads” 3 out of 5 shrouds. I know what you’re saying…you’re saying that I said it wasn’t a very good movie earlier in this review. So how does it earn a 3 out of 5? Although I did say that earlier I also said it was a fun movie with some interesting animation tossed in, an energetic (if not particularly good) cast, some okay gore effects & a good soundtrack. All for $3000 dollars! That’s worth 3 shrouds in my book. We have to nurture young filmmakers, not assf*ck them. Unless of course they deserve a good reaming. I said it’s not a good movie & I stand by that but the filmmakers show some potential if they stick with it & try to build on what they learned from making this flick  if/when they make their next one.

So until next time, Happy New Fear to all of my acolytes & those who are soon to be acolytes. Be good to your pets. Watch “Pawn Stars” on the History channel (best show on tv & I DON’T WATCH TV). And as always, when you say your nightly prayers…say them to me!!

Tags Night Of The Living Heads