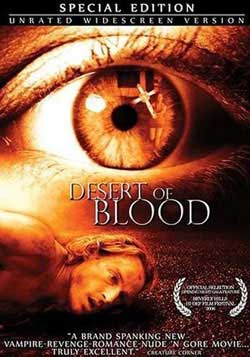 A character-driven horror film about a vampire who escapes from fifty years of captivity beneath the Mexican desert. On his quest for vengeance, he is unexpectedly sidetracked when he falls in love with a young woman visiting from the States. His efforts to deny the monster inside him ultimately prove hopeless, as his ever-growing rage finally triggers a bloody terror spree.

Desert Of Blood was one of the best Indie films of 2008, had a little something for everyone and every stage of life. From a somewhat korny but thrilling love plot line to fabulous gore scenes that puts a new standard for low budget movies. Writer and Director Don Henry and Producer Drew Brody both really out did themselves this time with this movies.It isn’t quite something that you would see Anne Rice write, but still none the less fantastic.This movie is one that I could watch over and over and never get tired of.

The camera angles were a little bit under quality and somewhat of your typical “horror” film angles. There were alot of from the bottom angles when obviously tense situations were going on between the main character Justin Quinn (Luis Diego) and Brenda Romero (Maricela). The camera angles though that really impressed me were up top you don’t see a whole lot of them lately but it just brought the tension and angst to that whole new level. I must say though there was some gutsy moves that even I woulnd’t have tried to pull, but Henry pulled it off rather well.Lots of nice zooms on the gore and blood, every scene with blood, guts, and gore was automatic zoom, which i very much enjoyed. I can honestly say

Moving on to the plot and the acting. Trust me I would be the first to tell you if it was Oscar winning, but unfortunately it wasn’t. For and Indie movie though it was pretty good. The plot line was not your typical love situtation, alot of twist and turns kind of like a Novella. The intensity in the actors was really good, it seemed very believable that the leading man was starting to fall for the leading lady.The acting didn’t seem as fake as alot of movies do, it seems like it was really rehearsed and well coached before filming this movie i was really impressed by it.The plot and the way it was filmed was really easy to follow it wasn’t a huge struggle. Don’t get me wrong though in the first about 15 minutes of the movie it was somewhat hard to follow, because it seemed all over the place jumping from character sequince to character sequence. After that though it explains it pretty well and is more understandable.

When they chose the cast it was pretty good picks, they all seemed to mesh well and had really good chemistry. No doubt the hot babes in this were not lacking. In one of the first scenes in the movie was a great oiled up boobs shot, which was fantastic I must say. I gave that two thumbs up for good family fun! The only main problem I had with the choice of cast was that it seemed like the leading lady’s friends were somewhat way hotter then she was. I think that, that is a huge no no in a movie since you want the focus on her. Instead though your just waiting for her friends to get all oiled up and take off their bikini tops (which they wore quit often).The leading man which i must say made a very sexy begining appearnce with blood over his face was to absolutely to die for no doubt.

I now can’t really see anyone as an evil but sensual vampire after his appearnce in Desert Of Blood.Even if you don’t like the plot or the costumes or anything else you have to like Justin Quinn’s (Luis Diego) hot body because they flaunted it everywhere! The main thing that I liked and this is the only film besides one other that I like human like vampires just because they turned out so sexy and mysterious.

All in All though I really enjoyed this movie it was very delightful and kept me entertained and I think will keep many entertained. I believe that this is an absolute must have for any collector of horror movies rather you like low budget or not.