The sixth annual Fright Night Film Festival was deemed “the hottest show in town,” as thousands of horror fans gathered in The InnPlace Hotel in Louisville, KY on July 30th through August 1st, 2010. Fright Night Film Festival caters to independent horror filmmakers by showcasing films that are made by people of all different backgrounds, and is a weekend filled with movie screenings, after parties, and celebrity guests who signed autographs and chatted with their fans. 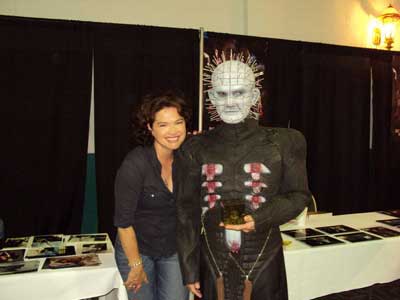 The three day event was highlighted with events such as: a masquerade ball/costume contest, Georgetown Drive-In movie screenings, concerts showcasing local acts, a celebrity VIP c**ktail party, SFX makeup contest, and an ending awards ceremony awarding the movies that really stood out to the committee of Fright Night. Also, there were celebrity Q & A panels, and tattoo artists on hand to promote their business while giving tattoos on site. There was a concession stand set up at the entrance, offering food and beverages so that refreshments could be purchased at the convention without having to leave the site. The price of admission was $20, and $35 for a weekend pass for all three days. The celebrity VIP c**ktail party, Georgetown Drive-In, and awards ceremony were all offered to everyone at various rates of admission.

Many vendors and filmmakers set up before the show commenced, and were displeased in the fact that the air conditioning went out prior to the beginning of the show Friday afternoon. Even though the temperatures stuck to around 90 throughout the weekend, that didn’t stop the crowd as they poured in to check out the convention. The conditions were hot, but horror fans still dressed up in costume from zombies to their favorite slashers(Michael Myers, Jason Vorhees, and more.) There were also strategically placed fans that tried to keep air flowing, and convention workers that passed out bottled waters to the vendors and filmmakers. Luckily, the movie screening rooms were air conditioned, so that led to sweet relief to the fans that stuck it out in the main vendor hall.

Even though the conditions were sometimes unfavorable due to the heat, everyone that stuck it out had a blast partying and meeting with their favorite celebrities at Fright Night Film Festival in Louisville, KY. One of the biggest festivals of its kind in the Midwest, the festival has a loyal following that return every year to check out new entries into the horror genre.