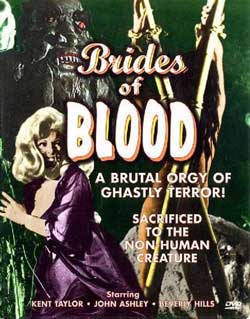 Who can think of a better vacation spot than a remote island paradise? With a name like Blood Island it can’t be all that bad can it. I mean sure you have giant mutating moths and c**kroaches, and those trees that attack anything that moves are kind of annoying. That big sex crazed monster though, I think that’s what we should be scared of.

“He changed from man to monster-And all he wanted was women!”

Let’s go back to the days of the drive in shall we. Go back to when all a scary movie needed was a man and a suit, and the guy always got the girl before the credits played. Gerardo de Leon and Eddie Romero’s Brides of Blood is actually part of a series of films taking place at the fiction “Blood Island”. The movies were made on the cheap in the 60’s and shot in the Philippines.

During the boat ride to the island we are treated to the captain explaining how he only goes to the island once every six months, so once he drops them off they are on their own for a while. Carla goes off and finds some sailor who gives her what she wants, and slaps her around too in a pretty confusing scene. There is a lot of confusion in this film as the edits and transitions between scenes and sometimes even shots is really jumpy; it’s almost like watching it at the drive in.
Once our cast gets the island they discover they have arrived in time to witness an island ritual. Did I say ritual, I mean a funeral and the body seems awful small. The size of the body is revealed when a leg falls onto the ground. Carla screams, get used to it you will see a lot of this throughout her scenes in the film. Our trio of visitors is assured the women’s deaths were an accident, so yeah I totally wouldn’t worry about anything and continue onto the island.

Lucky for our visitors there are natives here that speak English including the young sex pot Alma, who takes a liking to young Jim. Eventually another English speaking native comes out of the jungle. His name is Goro and he informs the three that his boss Esteban Powers would like to see them.

As the three make the trek through the jungle Dr. Henderson stumbles upon a dead crab that has mutated. If the mutant crab carcass wasn’t enough they soon notice that a nearby tree has a strange moving appendage. Dr. Henderson’s theories of radiation on the island might be right.

Arrival at Estebans mansion however isn’t exactly what you would call a comforting environment. First off all of Esteban’s servants are midgets. These midgets are just running around everywhere almost tripping people, tripping over each other and all kinds of wacky things. It was about this point in the movie where I started wondering what I had gotten myself into.

Esteban of course asks the three to stay, but our visitors have to go get their things from the village. This leads to an amusing sequence of our cast running through a jungle that has suddenly come alive. The tree limbs grab for anything that comes near them, and other plants send out chocking pollen into the air. The limbs when cut also seem to bleed, that isn’t normal. The trip isn’t an easy one, and the ride is far from over.

As the group gets closer to the village they stumble upon yet another strange ritual. They see girls being tied to bamboo stakes and stripped. They are told that they cannot witness what happens, but we get to see and hear it. That’s right; a monster comes out of the jungle and attacks the women. We later learn that the monster known as the “Evil One” gets two sacrifices a night. Only women though, you see the monster isn’t eating the women, the monster is pleasuring himself with the women, and apparently he likes it pretty rough.

It isn’t long before Dr. Henderson starts making some discoveries about the mutations on the island. The mutations can cause the animals to change shape, as witnessed in a laughable scene involving a moth made out of paper and crayon it appears. While all of this is going on the village has its daily lottery to see who is going to get sacrificed to the evil one the next night, and wouldn’t you know it Alma’s number comes up. I won’t go on to describe the next few sequences in the film as I honestly don’t want to ruin your enjoyment of this piece of celluloid trash.

Being a drive in film from the 60’s you know what kind of crowd probably came to watch movies like this. This movie however is perfect for such an occasion. You have your slow dead points where you can put your arm around your favorite girl, and just when things are getting hot you get to see a guy in a monster suit attacking naked women.

The special effects however are laughable at best. During several of the scenes involving the trees attacking, you blatantly see the strings controlling the vengeful limbs. You also see the string holding up that silly little moth prop. Let’s not forget there is a pretty laughable transformation scene included here as well. I would say I’m being hard on the movie, but that’s exactly what it wants you to do. This movie makes no bones about what it is, and it is enjoyable.