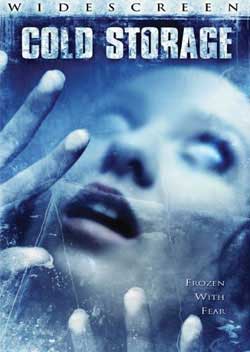 When an aspiring actress heads to a small Tennessee town to act in a play she is involved in a horrible auto accident. Simple-minded local Clive soon comes across the wreckage and takes it upon himself to take her back to his place to nurse her back to health. She dies soon thereafter but Clive doesn’t mind and enjoys her company. Her sister and ex-boyfriend soon come to town looking for her since she is missing, but Clive isn’t quite willing to just let his guest leave. As he becomes more and more mentally unstable he goes to drastic measures to ensure that no one takes her away from him.

Cold Storage” is without a doubt a very strange movie, but I mean that in a very positive way. I really didn’t know anything about it before I saw it and thought that with a title like that it was going to be just another zombie movie. Man, was I wrong! It is definitely out there and different, and I have never really seen anything quite like it before (though it did remind me a little of the Nekromantik films). I applaud the filmmakers for trying something original and for the most part it works.

Once I realized that it wasn’t going to be a zombie flick (or a slasher as the opening scene would have you believe) I thought I was in for another one of those movies where someone is held hostage by a deranged person and the entire film is that person trying to escape that my mother loves so much. Luckily I was wrong (those movies are a dime a dozen and have been done to death in my opinion) and “Cold Storage” went a totally different route by having the “victim” be a corpse. The results are fascinating as well as entertaining, and I for one enjoyed the ride. I was hooked early on and couldn’t wait to see how everything turned out in the end.

Nick Searcy steals the show as Clive. He does an excellent job of playing a mentally retarded hermit and comes off as a demented Forest Gump. I thought that the character was very sympathetic and I actually found myself feeling sorry for him (at first, anyway). Clive is a very lonely person and all he wants is to have someone in his life. I thought that a lot of the earlier scenes with him (such as him showing the corpse the picture album, the “romantic” dinner they have, and the trip they take to town so he can show her the sights) were depressing and I couldn’t help but feel a little saddened by them. Of course my feelings changed after he thought that she cheated on him and he became a violent psychopath. Searcy is a very talented actor and I hope to see more of him in the future.

The rest of the cast is pretty good as well. Joelle Carter is decent as the concerned sister and Matt Keeslar is equally good as the dead woman’s worried ex-boyfriend (and for a nerdy guy he sure is hard to kill, even though Clive tries his damndest). Jeffrey Pillars provides some minor comedy relief as the redneck sheriff who doesn’t care for outsiders (and obviously loves eggs-the scene where he sticks a straw in a fried egg and sucks up the yoke was disgusting) and my wife made the comment that he looked like a young Orville Ketchum (from “Hard to Die” among other things). I also thought that Brett Gentile was impressive as Clive’s “buddy” Luther, the skanky pervert who has no problems having sex with a dead body. It was obvious that he had fun with the role and I thought his performance rocked.

I also dug the fact that even though it isn’t really a horror film there is still an abundance of gore, violence, and just plain gross stuff going on. Highlights include a dead body with part of its head blown off, a person has the back of his leg graphically slit open with a straight razor (ouch!), and a grand finale that features someone getting stabbed in the eye. We are also treated to nasty things such as the dead woman’s decomposing body, and Clive doing some gross things such as plucking a huge tick off of his head and squashing it as well as “brushing” his teeth with a straight razor (a bit that really, really bothered my wife as we were watching it). 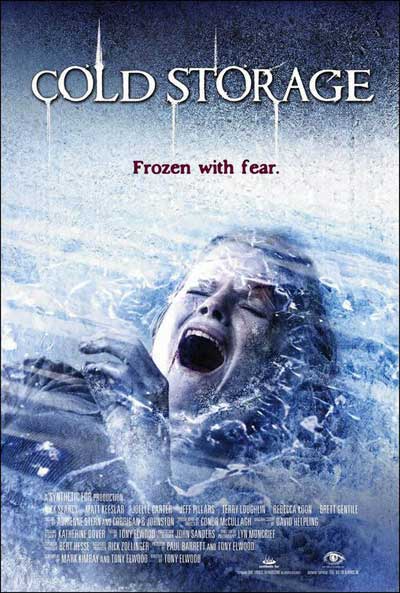 I really enjoyed “Cold Storage.” I thought that it was very original and it was refreshing to see someone try something different for a change. The only problem that I had with it was that there were some scenes that were a little pointless (such as the flashback at the beginning and I still don’t know what the point of the whole scene in the gas station was as it added nothing to the movie and was just a waste of time), but other than that I thought that everything else was fine. If you aren’t in the mood for the same old thing and want to watch something different then give this movie a shot.