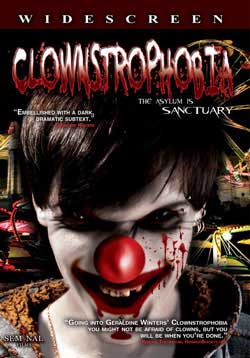 Dr. Weathers is a psychologist who along with Dr. Boyd decides to have a therapy session at her estate with a group of juvenile delinquents who all have one thing in common, the fear of clowns. Dr. Weathers also has a fear of clowns with a darn good reason; Dr. Weathers brother dressed up like a clown and called himself Snuffle during a killing spree that also ended the life of her parents. Should someone warn Dr. Weathers that before her session can get too intense that Snuffle has broken out of the mental institution that has been holding him?

“Therapy is a waste of time with this group!”

I am still not entirely sure what I watched by the time Clownstrophobia was over. I know that Coulrophobia is the actual name of the fear of clowns, but Clownstrophobia is so much more fun and easy to say (it is also quite funny during the movie when the professionals actually use Clownstrophobia as a professional term). Clownstrophobia starts off by showing a patient in a mental institution getting some shock treatment, and really it just slams images at the viewer in a confusing manner for most of its running time (luckily it is not that long of a film).

Clownstrophobia starts by introducing Nurse Sneed. Nurse Sneed is supposed to be in charge of taking care of “Patient X” who is a highly disturbed individual. Patient X has already attempted suicide four different times and claims that her baby was taken from her. The things that disturb Nurse Sneed the most however are the fact that Patient X was found at the carnival and she also has a morbid fascination with clowns. Nurse Sneed is terrified of clowns so she really isnt to pleased when she finds out about her assignment.

Clownstrophobia does not just follow Nurse Sneed and Patient X. Dr. Weathers and Dr. Boyd have decided to have a therapy session at Dr. Weathers estate for a group of juvenile deliquents who not only have the fear of clowns in common, all of them also have some kind of contact with Patient X.

The delinquents are all in trouble for various reasons from calling in a bomb threat to playing practical jokes on cheerleaders by substituting hair remover for shampoo. The calmest guy in the entire group however is in trouble because he suddenly snapped at school by throwing a chair and attacking his principal with a lacrosse stick.
While the viewer is introduced to all of this they are also introduced to the mental institution where “Snuffle” is. Snuffle is Dr. Weathers brother who suddenly snapped one night while dressed up like a clown.

While dressed up like a clown Snuffle went on a killing spree which included his own parents! The institution where Snuffle is kept however is hardly up to code by today’s standards. The viewer gets to witness one scene in which all of the employees of the institution place bets and watch as inmates fight with each other. If this doesn’t make you scratch your head and wonder what is going on than the scene involving a costume party in which Snuffle sneaks up and kills one of the employees wearing a clown suit really isn’t going to make sense to you. We wont even mention the fact that the next time you see Snuffle he has a mask on, when the mask was never even involved in the initial costume. These are just some examples of how confusing Clownstrophobia can be, for the first thirty minutes of the film the viewer is tossed between therapy sessions, really bad institutional behavior and a really confusing Patient X. 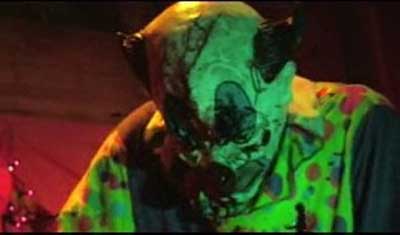 During the therapy session various members of the group tell why they are scared of clowns in the first place. Dr. Weathers of course because of her brother, one girls mother wore too much make up and reminded her of clowns, another girl ran from the clowns at the carnival only to end up spending the night in a fun house where a clown attempted to take advantage of her. One of the boys in the group says that his grandmother told him that clowns stole peoples souls and relates a story about his cousins birthday in which he saw it happen with his own eyes.

Eventually Snuffle finds his way to the Weathers estate and starts to dispatch all of the teenagers and pretty much anyone who gets in his way. For the most part Snuffle tends to use a large corkscrew for most of his killings but he isn’t limited to just that. Snuffle also likes to use knives to hack and slash his way across his victims, he also has quite a thing for power tools! Winters and Dowding really lay on the red stuff during the scenes when Snuffle is doing his dirty work, which really just occurs in one room. When one isn’t watching the scenes of Snuffle killing his victims they can watch Patient X do some really disturbing things to Nurse Sneed including painting a picture of a clown on her wall with her own slashed wrist! I personally found the scenes with Patient X alot more entertaining than watching Snuffle dispatching the disposable delinquents which I started to find pretty boring after the first few kills.

Clownstrophobia seems like it maybe had just one too many ideas going on at once. It gets very confusing in alot of parts and the acting ability of a chunk of the cast really has the viewer ready to reach for another film to watch. The scenes in which Snuffle is shown doing his dirty work however do make it worth while viewing to any gore hound who just so happens to also have a six pack of beer sitting around their house.