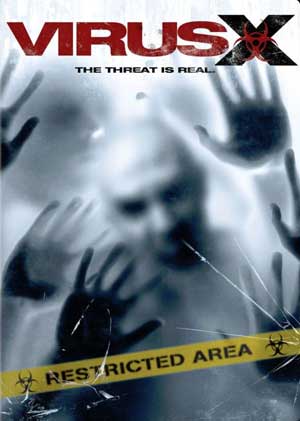 SYNOPSIS:A group of medical scientists are quarantined inside their lab after being infected with a deadly hyper-mutant form of the H1N1 virus. With only 3 days left to live they have no way to escape and no way out. While the deceitful head doctor monitors them from a hidden surveillance room the scientists must uncover the harrowing truth behind their detainment and force their own way to freedom

“H1N1: Virus X” is a guilty pleasure. The movie is silly, exploitative, and actually kind of fun. I get bored watching “virus run amok” films anymore. For some reason they just don’t appeal to me and felt the same way going in to this one. Thankfully, there was just enough shenanigans and viral bloodshed to make this a relatively entertaining yarn. It didn’t hurt either that director Ryan Stevens Harris enlisted the aid of legendary B-movie maven Sybil Danning to lend her special blend of commanding presence and sexuality to a minor role that deserved more screen time yet still steals the show. 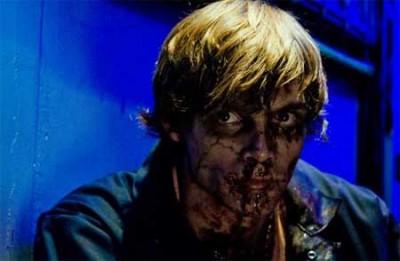 The wealthy Danita Herrington (Sybil Danning) is the benefactor of a scientific project, led by Dr. Gravaman (Joe Zaso), that’s studying the H1N1 virus as well as mutating it in an attempt to create vaccines for any possible strain. When Malcolm (Jai Day) joins the team, he becomes suspicious of the methods that are being used and how dangerous it could potentially be. His suspicions become confirmed when doing research he discovers that the new strain being tested is the most dangerous yet only to have it let loose within their medical facility, infecting every member of the team. They fight to stay alive while trying to uncover the truth of their research and survive for as long as they can while being watched by Gravaman and Herrington’s lap dog Jerron (Domiziano Arcangeli).

Some might argue that this is just a film made to cash in on a scare that many around the world were feeling. Maybe it was in a sense but the film does not send any shockwaves in our minds. It is an attempt to create an exploitation film and it succeeds in being a mildly entertaining one. I was surprised to find that the majority of acting in the film was better than expected and that there was an attempt to build character and suspense. Sybil Danning delivers the goods being the performer that she is and it’s always a pleasure to see her in a film. The medical team that were infected, led by Day, though lacking in character, ham it up enough to be interesting. What had me stumped was the character of Jerron. I couldn’t figure out what the hell he was. We have all these doctor types running around in their biohazard clothes and this guy has the long straight blonde hair that covered most his face, dressed head to toe in tight black clothes, and in some sort of robotic like haze. Nice practical effects combined with some fast paced music video style editing adds the gore factor though we don’t get to see much until the final act of the film.

My main issue with the film was that there were very few still shots in the film. The camera was constantly shaking in a way that was almost dizzying. I don’t know if it was supposed to be some sort of artistic decision or just being sloppy, either way it was rather distracting and did interfere with my further enjoyment of the film.

I’m not going to slam this film. It isn’t a very good one but it achieves what it is supposed to do: entertain. There was a decent amount of tension and the attempt to show character within the situation. Though there is nothing believable in the story, it still manages to hold your attention for its 90min runtime. It has just been noted that Lionsgate has picked up the rights of the film to be released on DVD February 1, 2011. It should also be noted that they have changed the films name to “Virus X”. I can understand the reason behind this but all “H1N1” is, is a harmless exploitation film, sometimes fun, sometimes ridiculous, and worth checking out. Being a Sybil Danning fan, it gives the film an extra ingredient to make it a point to see at least once.