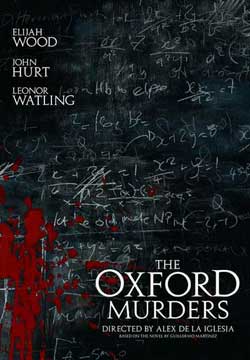 At Oxford University, a professor and a grad student work together to try and stop a potential series of murders seemingly linked by mathematical symbols.

I remember years ago seeing John Carpenter’s Prince of Darkness and thinking it was pretty cool to see a horror movie that incorporated quantum physics. Hey, who says you can’t learn something while watching horror movies. Such is The Oxford Murders, a movie that tries to play it smart with mathematics while there is murder afoot. Does the solution really boil down to a simple equation?

Elijah Wood (everyone’s favorite hobbit) stars as Martin, a super smart American college student arriving in Oxford hoping to get a chance to study under Professor Arthur Seldom played by John Hurt (The Elephant Man, Alien). Martin attends a lecture and tries foolishly to outwit the master, only to be ridiculed in front of everyone. Not a good start for our hero. How can he ever get a chance to study with Professor Seldom now?

Lucky for him there is a murderer about to strike. Martin returns to the house where he is staying and discovers the body of Mrs. Eagleton, the old lady and owner of the house. Seems she was killed while playing Scrabble. Is there any justice in this world? It just so happens that Professor Seldom arrives at the same time and together they start to work on who the killer might be.

The Inspector working on the case doesn’t seem to have any idea. Actually, his main role in the movie seems to be that of the layman. When Martin and Professor Seldom start talking over our heads, he is the character that comes to the rescue by raising his hand and asking for a simpler explanation. In short, he does a good job looking confused as he tries to keep up with our two amateur sleuths.

And the list of suspects is just about everyone. It could be Beth Eagleton (Julie Cox), the young cello player who can’t stand her overbearing mother. She also happens to have a crush on our young hobbit, I mean Martin. Is it Lorna (Leonor Watling), the nurse who Martin falls in love with and begins a steamy romance? Not to mention a scandalous one with the dear Professor as well. Maybe it’s Yuri, a fellow student who at one point, in a drunken stupor, does a perfect and creepy imitation of a schizophrenic Gollum, complete with facial expressions, as he rants about someone who has just solved a centuries old mathematical problem. As the body count rises, it is anybody’s guess.

I have to say that I enjoyed this movie. The pacing was relaxed, but not to a fault. Like the aforementioned Prince of Darkness, it was interesting to have some quick repartee between Martin and Professor Seldom in regards to mathematics, philosophy and whatever other branch of the arts and sciences they could throw in. I didn’t understand it all, but I loved it nonetheless.

Elijah Wood and John Hurt are both excellent in their roles, as is the supporting cast. The direction is very good and includes one heck of a tracking shot as it travels with four different characters through interiors and exteriors. It would be interesting to find out how many takes that one took. The score is appropriately restrained, no Psycho shrieks to be found here. The plot twists and turns respectably and I had no idea who the killer was. The scenery was, no real surprise, really gorgeous. I mean, let’s face it, there’s something about English towns and the grey, cloudy skies that scream murder mystery.

I would recommend seeing this movie if you can rent it. I wouldn’t put it on the buy list but that doesn’t mean it’s a bad movie. It’s just that I’m not sure it really demands multiple viewings to figure anything out. Enjoy the ride the first time. At the very least you’ll be left with some philosophical tidbits to chew on.