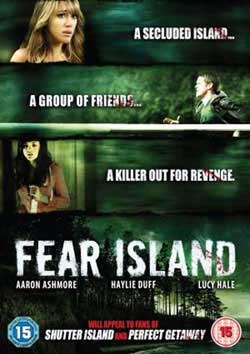 After a blowout party at a secluded island cabin, five friends make a shocking discovery: a dead body and the only boat off the island gone. Trapped and unable to call for help, they become prey to a mysterious killer seeking revenge. Together, they must decipher the murderer’s chilling series of clues to reveal the island’s secret past … or face death one by one.

Directed by: Michael Storey
Written by: Jeff Martel
Starring: Lucy Hale, Aaron Ashmore, Hayley Duff, Kyle Schmid, and Anne Marie Deluise
In horror movie culture, the perfect getaway always seems to fall through as young adults take a trip to get away from the troubles of their home to an all new problem that can be deadlier than a relaxing escape. Especially when a mysterious killer is on the loose, the race to leave this place of serenity becomes top priority over drinking and enjoying a vacation. In Michael Storey’s “Fear Island,” a senior trip for some graduating high school kids turns into their worst nightmare as a mysterious slasher preys on the members of the group, turning their vacation into an all-out killing spree.

“Fear Island” begins with a young woman(Haylie Duff) being interviewed by police detectives and a psychologist, Dr. Chalice(Anee Marie Deluise), about the murders of six people on the island in which she was vacationing. Calming suggesting that the interrogators ask kinder questions to get the truth out of the young woman, they end up medicating her and she begins to retell the story. In storytelling, the young woman is able to name all the friends on the boat, and ends up spilling the beans of her name, Jenna.

Jenna introduces the characters as they show up on the boat; Tyler(Kyle Schmid), Kyle(Jacob Blair), Ashley(Jessica Harmon), and the boat driver, Keith (Jim Thorburn). Also, there is Jenna’s ex-boyfriend, Mark(Aaron Ashmore), along with a young jailbait stowaway, Megan(Lucy Hale). When the group reaches the island, they immediately commence partying as couples begin to go off with each other having their own good times. Keith stays looked away in his own cabin, as the rest focus on having a good time. Unfortunately, this good time is interrupted when blood is found mysteriously in an ice bucket, and Ashley’s dog ends up missing. Not ending there, the boat that they rode in on ends up disappearing, plus mysterious words are being spray painted on anything from toys to the house in which they are staying. When members of the group start to get picked off one by one, the race to get off the island is patterned with plenty of death and plot twists to keep the movie going til the very end.

The actors and actresses did an excellent job of portraying their roles of high school seniors enjoying a getaway to an island away from home, and the alarming twist at the end is something that is a surprise to all that view this flick. This was a mad for TV movie, so all the kills are there but not really bloody or gorey. All the kills are done using natural elements or household objects; for example one is killed off by being bitten by a venomous snake. Even though the ending is a surprise, the rest of the movie wasn’t too surprising, as a group of unknowing teenagers are preyed on by an undisclosed killer.

Michael Storey’s “Fear Island” is a horror mystery that keeps the audience guessing to the very end on who killed six out of seven young adults on a discrete vacation resort type of island. These teens realize that there is more to live than sex and partying, when their previous actions taken are revoked back on them in a deadly way.