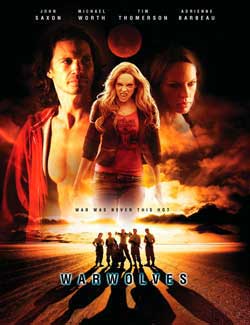 Fresh from the battlefields of the Middle East, vet Jake Gabriel (director Michael Worth) faces a new enemy as he struggles to suppress the werewolf within after having been cursed with lycanthropy during a gunfight. John Saxon plays a commander sent to the States to apprehend Gabriel before he can infect others — little knowing that a trio of female soldiers from Gabriel’s unit is already pursuing the wolf man … for a very different reason.

Michael Worth’s WAR WOLVES is not a great film and it really is not much of a horror film, but it certainly is not a bad film. Writer/Director and star Michael Worth’s unusually strong screenplay really helps elevate the material above and beyond your typical low-budget werewolf flick. The casting of veteran actors John Saxon and Tim Thomerson were a smart choice. They have great chemistry with each other and their scenes together are a joy to watch. WAR WOLVES is a rather peculiar film though. It almost seems as if Mr. Worth wanted to make a contemporary war drama about former Iraq/Afghanistan war
veterans dealing with post-traumatic stress disorder when a pesky executive producer (or marketing executive) insisted that what the film was really missing was a pack of vicious werewolves.

The plot follows Jack Ford (played by John Saxon) who leads a Special
Forces unit to hunt down Jake Gabriel (Michael Worth), an American solider who was infected during a combat mission with a virus that turns people into wolves. Jack is unaware that three of the female soldiers serving in Jake’s unit have also been infected and have already transformed into deadly she-wolves. Unlike his fellow soldiers, Jake seems to have an innate ability to control the virus from taking him over completely. Jake joins forces with Jack and his partner Frank who battle it out with the she-wolves in a race to save mankind from becoming infected with the virus.

For better or for worse, this is a cross genre picture that tiptoes the line between war drama, action film, and horror movie. Personally, I preferred the dramatic element of the film because of the strong acting and clever script. Although technically the action sequences were well done, they seem to be out of place and bit over the top. The horror element was rather weak. The (war) wolves were not very scary. The makeup effects were really mediocre. And, what was up with those stupid dog noses? At times WAR WOLVES seemed like a vampire movie because early on in the film the werewolf characters never really go full werewolf, they just kind of grow some fangs and a dog nose. I found that very annoying. I like my werewolves like my women, big and hairy!

However, WAR WOLVES works because the acting was consistently strong throughout the picture. Adrienne Barbeau gives a good supporting performance and the three killer she-wolves are equally sexy and fierce. Worth’s decision to make the she-wolves former soldiers really helps their credibility as fearsome, intimidating monsters. Worth’s character, Jake, is a sympathetic hero who struggles with his own inner demons and is likeable enough for the audience to root him on throughout. But, it is the chemistry between Tony and Frank that really kept me entertained. They bicker like an old married couple and it is really quite funny. They also look like they knew how to handle a gun during the shoot out scenes, despite their old age. That is not easy to do!

WAR WOLVES is a low-budget film (approximately $500,000 according to IMDB) but it never really shows it budget—with the exception of those dog noses! I think more money could have been spent on makeup effects and less on the elaborate martial arts sequences. They just did not work as well as the gunfights and I never could understand how turning into a wolf would magically change you into Bruce Lee. It seems that as a wolf you would fight by running on all fours and biting people with your fangs.

I recommend WAR WOLVES to fans of the werewolf horror sub-genre. Even though it is definitely not the best werewolf movie I have seen, you can certainly do a lot worse. Those three sexy she wolves alone should be enough to keep your attention for the full 96 minutes.