Being Canada’s only working horror hostess is a tough job, but Miss Gory Rae is up to the task. 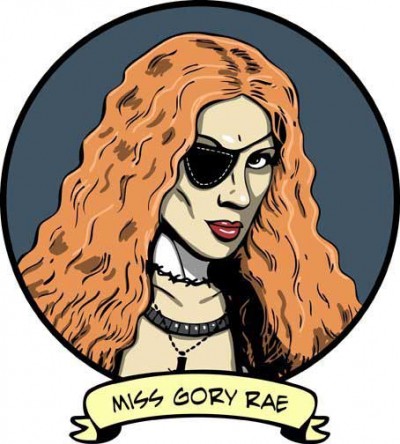 “I attended college,” begins Miss Rae, “whilst working three jobs to put me through, as I left home quite early, by fifteen or so. I was working and going to school, while living with fiends, so, I have always been very secluded in my beliefs, observations, and determination to prove that even though I had never seen any female horror host—save Vampira and Elvira, of course. I used what I had—which was not much—as well as a wonderful Film Dept. faculty that had faith in this freak! They had over ten thousand films in the Library, and many of them horror, 35mm, video projection…even cinemascope! I was given the ‘key’ and a brand new, state of the art—in 1992, anyway—250 seat teaching theatre. That was, of course, very imperative for what I had hoped destiny would give me…just the basic tools, and that passion that needed to be released. I didn’t have to work on a ‘character’ so much, as I always surmised that if I did not have to read up on it—i.e. it just came so naturally, It felt right. Plus I had my own place within serving an entire University campus, with stuff they had never even thought they would end up paying to see, in addition to LOVING it!!”

She adds, “Upon becoming more involved and interested in the horde of hosts—which has always mainly been an American phenomenon— I have always been beyond different, as hard as it has been, It has given me strength in my convictions that I am damned serious about breathing new life into a re-animated revival. This is pretty much the only real example of just how fundamentally different one can go; when you are not being set up as the next template to ‘emulate’. Just think…how many Elvira impersonators are there making a living ‘emulating?’ I never want to end up being ‘compared.’”

The Ohio-born, Vancouver transplant is certainly no photocopied slouch; making her own way through the industry while having even earned notice from Troma’s legendary co-founder Lloyd Kaufman.

Miss Rae regales us with the tale thusly: “I first met Lloyd Kaufman through the all-encompassing internet, It then moved into amazing phone conversations, before finally receiving an invitation to be his ‘guest’ at the premiere of Poultrygeist in the 2007 Calgary International Film Festival. Lloyd asked me to become more involved, and brought me ‘out’ in front of several TV cameras, and insisted that I became ‘known’. He made me an honorary Tromette, and when asked “Will we be seeing Miss Rae in anything of yours soon?” his answer was, ‘most definitely, yes!’” 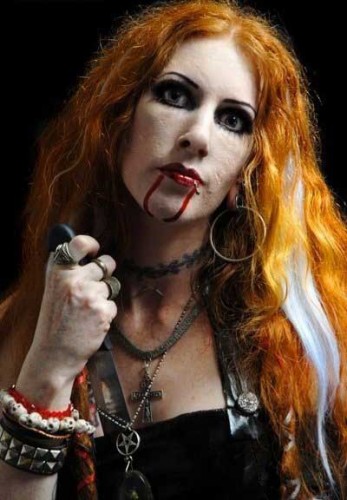 She continues, “Less than a year later? I was being brought by him to several Cons to work the Troma booth—since Lloyd is always busy with fans. The last time I worked for Lloyd, he was very persuasive in getting me to lecture with him—again, on Poultrygeist—which was an honor, as I think when it comes to Uncle Lloyd? He is such an incredible linguist, seriously, I never tire of listening to him speak. I am very proud of the bond that we share, and that he was the one that baptized me in his pen: ‘Miss Gory is Thee Goddess of Horror!’”

Given the fact that Gory Rae’s horror hero happens to be Vincent Price, it seems fitting to assume that the hostess’ film taste might tend to venture toward the old school, although—upon further examination—Miss Rae’s appreciation of the genre appears to be far more wide-sweeping.

“I’m actually more into films such as Ken Russell’s The Devils—my personal favorite—or The Blood on Satan’s Claw. I’m also into the Hammer films like The Devil Rides Out and To a Daughter the Devil Comes, both written by one of my all-time favorite authors, Dennis Wheatley. I would have to say that I have grown VERY fond of the work of Ti West after seeing House of the Devil, and I also absolutely LOVE films about plagues, bodysnatching, and cannibalism! Also—while I really wouldn’t call it Nunsploitation—I do own some of the more rare unknown films in this sub-genre, along with the more recognizable ones as well…”

Closing up shop with us, Miss Rae has the following words of wisdom: “I do not know what ‘normal’ is, except for the fact that I am not. You will never see me doing anything like any host before me, and I am making sure that nobody will want to even try. I strive to give my viewers and fans something utterly unique as it is entertaining. As always, I do not think I could ‘emulate’ anyone else’s ‘shtick’ if I tried. There have been, are, and always will be the people attracted to this biz because they think that a camera, editing skills, and an expensive get up is what it is all about; same with ‘so-called celebs’ who, when you really take a good look, are not doing it for anyone but themselves. I always say ‘hey…if I did not feel that I will be roaming this dimension as a disembodied, unhappy spirit should I give up, bow out, or just secede to a more ‘sparkly’ personality? Then? I deserve to haunt them for a LOOOOONG time!”