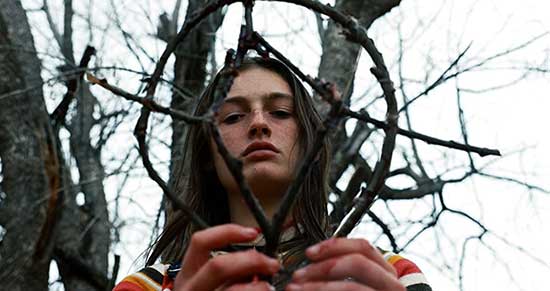 A lonely teen discovers her family’s ties to witchcraft.

Witchcraft is a mysterious concept. To some, it’s about Halloween stories and costumes. To others, it’s a dangerous curse that can be mistaken for a gift. Discover how twisted this curse can get in “Hellbender” which made its world premiere at Fantasia International Film Festival.

Izzy and her mother (real-life daughter and mother, Zelda Adams and Toby Poser) live in secluded fashion in their house, deep into the woods. The teenage girl roams the woods to hike, swims in the nearby river, and enjoys drawing. They even have their own 2-woman band; H6LLB6ND6R, where they dress up, apply make-up creatively and jam out together as if they were live, in front of a huge crowd. That’s probably the closest to feeling a part of society that Izzy feels since her mother denies any requests for her to go out into the village, claiming her daughter has a dangerous, contagious disease since she was 5 years-old. However, the teenager begins to socialize with other people her age and realizes that her mother has been hiding a dark secret from her. A secret involving a long lineage in a dark family tree of witchcraft. Izzy is just about to find out that her mom wasn’t actually protecting her from the nearby community; she was perhaps protecting the nearby community from her.

First off, let’s throw it out there, right now, that the cinematography will absolutely blow your mind. You will constantly repeat to yourself how awesome the crisp visuals are, no matter if you’re watching the morbid first scene or Izzy roaming the peaceful woods. The camera angles and movements, whether using a drone or not, always ensure that, even if no action or dialogue is taking place, your eyes will nonetheless be wandering around the screen to appreciate every detail offered to you. Any scene involving the occult are also borderline hypnotic with a perfect mix of intriguing visuals and a spellbinding soundtrack.

At the same time, from an independent movie, you’d expect some really terrible special effects. Surprisingly enough, Trey Lindsay, in charge of the film’s special effects, does a more than honorable job at pleasing the eye with his attention to detail in any scene going from a character mixing their blood with any nature-related ingredient to any scene involving physical harm using witchcraft.

What is especially impressive about “Hellbender” is that the film was written, directed, and produced by the real-life family of John Adams, Toby Poser and their daughter Zelda Adams. Not only do the mother-daughter duo carry the film on their backs, but John also gave himself a small role within the storyline, in addition to working on its soundtrack himself. The same writer/director/actor formula was also utilized in their last film presented at Fantasia, in 2019, entitled “The Deeper You Dig”, and with this last one, the family proves that they are a movie-making force on the rise to keep on your radar. Toby’s character as the mother reticent about allowing her daughter to mix with the “regular” citizens of their village is genuine and heartfelt, whereas Zelda is capable of playing the reserved, socially inapt teenager, but also the innocently sinister being she truly is.

The one criticism to make on this modestly impressive independent film is that it would have been so much more interesting, violent and chaotic if Izzy’s self-discovery had resulted in so much more carnage; almost Carrie-style. With the Adams’ family’s cinematic execution skills, who knows how off-the-walls it could have been. Although, understandingly so, movie budget is always a huge factor for smaller movies.

For a witch’s coming-of-age tale, look no further than the Adams’ family’s “Hellbender”. Although it is far from being a perfect film, it delivers credible performances, astounding cinematography and more-than-decent special effects, resulting in a score of 7/10.