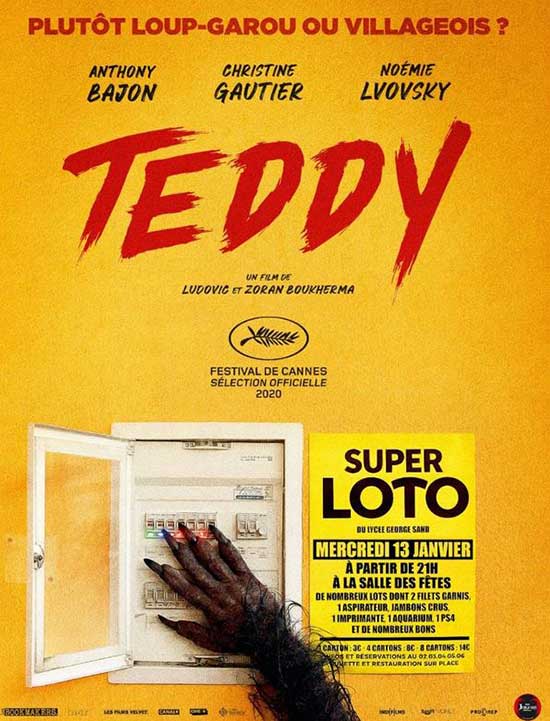 In a rural French town, twenty-something Teddy is scratched by an unknown beast and slowly undergoes frightening changes.

Teddy is the first film I watched for the Chattanooga Film Virtual Festival 2021. The festival is from June 24th -29th.

Directed and written by Ludovic Boukherma and Zoran Boukherma. I did a little research and found out that Ludovic and Zoran are twin brothers. Teddy is set in a French countryside and has a rad soundtrack.

Teddy (Anthony Bajon) is a teenager living his life. He has a girlfriend and he knows there is something attacking the animals nearby.

Teddy is helping his grandparents out and he heads out to work. The temp agency sends him to work at the massage place. Ouch, Teddy got scratched pretty good by something wild. Pepin (Ludovic Torrent) helps Teddy get a piece of the animal that scratched him out of his back. 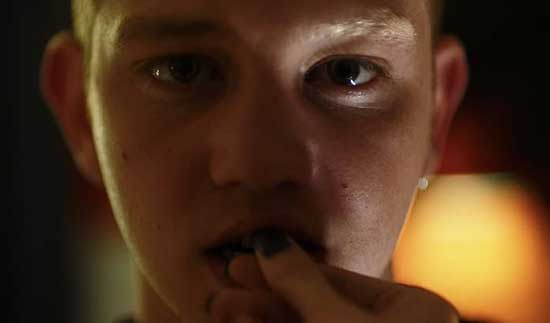 Uh-oh, Teddy is having nightmares and missing toes are involved. Teddy’s girlfriend comes over. (I’m not sure future werewolves should do mushrooms?!)

The toilet scene and the puking! I can’t. It takes so much to gross me out. Teddy’s unclogging a toilet and winds up in the freezer at the salon. I’m not sure if he feels like he’s on fire or if he’s having a moment of, I just need to lock myself in the freezer.

Teddy winds up getting primal with his boss from the salon, Ghislaine (Noemie Lvovsky). Teddy has hair coming out of strange places. He decides to do a Google search. He reads about werewolves and the symptoms.

There is something pure and gruesome about this film. I’ve learned from Google translate, “Non Au Loup” might mean No to wolf. Teddy’s life has been turned upside down. He’s changing, he is losing Rebecca (Christine Gautier), the girlfriend.

The transformation scene is gnarly. The glazed eyes are amazing.

Teddy is changing and Rebecca’s dating a new guy. Teddy also had to watch a wolf get shot. That was a bit traumatizing for him. Rebecca and her new man are singing their hearts out at the school’s bingo night. 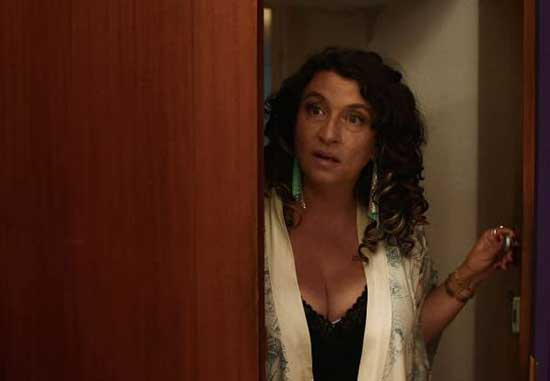 When we think about werewolf movies, you have films like, An American Werewolf in London, The Howling, Dog Soldiers, Bad Moon, and many more. Teddy doesn’t just rely on the infamous imagery of werewolves but the sounds, the horror of what a werewolf is to a person. The wolf in Teddy is animalistic, it leans more towards possibly practical effects?

Teddy is revealed as a werewolf to Rebecca. The reveal of Teddy as a werewolf is terrifying, and scary. But he’s also a werewolf with a broken heart. Teddy went on a massive killing spree. As a werewolf, he got everyone. The police are looking for him now. He is passed out and floating in a lake or a river? That funnel sound you hear when you float in water, that’s the most accurate version of the sound I have heard in a while.

This movie is beautifully shot. It’s not just about werewolves and chaos but love and family, loss, respect and disrespect of humans and nature. The care that Pepin shows to Teddy and the family they are. It’s sad and beautiful at the same time.

The police find out and those hunters that were hunting the wolves show up at Teddy’s house. It’s horrible that this happened, Teddy lost his love, tried to win her back. The hunters are not going to stop. Sadly, Pepin cannot hide Teddy. There is no happy ending, no unresolved issues, no what now? It’s sad. 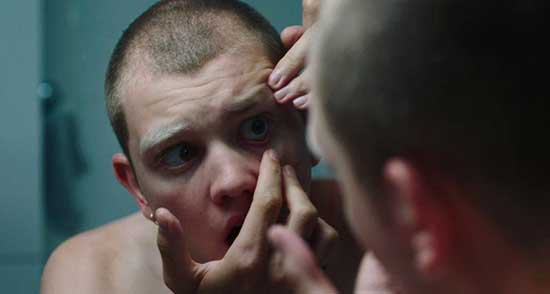 Teddy is funny, it has some great scary moments. The special effects and make-up are intense. They did such a good job with the wolf, the kills, the wounding effects. This was a fun movie to watch.

I would recommend watching Teddy.