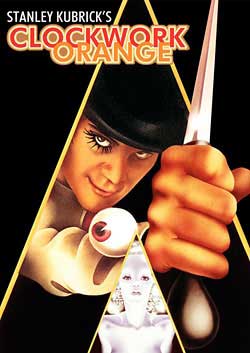 “Protagonist Alex is an ultraviolent youth in futuristic Britain. As with all luck, his eventually runs out and he’s arrested and convicted of murder and rape. While in prison, Alex learns of an experimental program in which convicts are programmed to detest violence. If he goes through the program his sentence will be reduced and he will be back on the streets sooner than expected. But Alex’s ordeals are far from over once he hits the mean streets of Britain that he had a hand in creating.” (courtesy IMDB)

The most spectacular fantastic film from Stanley Kubrick was 2001: A Space Odyssey (1968), but that was not his first genre effort. Going by the extraordinary title of Doctor Strangelove Or How I Learned To Stop Worrying And Love The Bomb (1964), it still remains the last word on cold-war tensions and makes contemporary films on the same theme look feeble by comparison. Kubrick’s achievement was to diagnose (through the gross caricatures of black comedy) the most alarming and least-discussed possibility of nuclear politics – that the leading protagonists may be appallingly attracted by precisely that vision of Armageddon which it is their job to prevent. We see it in the mad scientist Doctor Strangelove (Peter Sellers) for whom the idea of a cleansing holocaust is sexually exciting, we see it in the lunatic General Jack Ripper (Sterling Hayden) and we see it in the final sequence in which the Texan bomber pilot (Slim Pickens) rides the bomb itself like a bucking bronco, followed by Vera Lynn’s voice swells sonorously behind atomic mushroom clouds. The viewer is left feeling somewhat ashamed because Kubrick has succeeded in making the spectator want to see this glorious destruction – it is precisely at this point that the film achieves its major, unnerving success.

After 2001: A Space Odyssey, Kubrick returned to the near future as a way of making another dark commentary about the direction of social evolution. In A Clockwork Orange (1971) he even works the same trick of playing uplifting music against scenes of horror – this time a brutal rape is carried out by one of the roving youth gangs which populate society while Singin’ In The Rain is sung. Anthony Burgess‘s satirical novel, on which the film is based, obviously resulted from a creative chemistry compatible with Kubrick’s own, for the whole film has an amazing sureness of touch, the feeling of a personal statement that is rare in film adaptations of novels. The futuristic settings are tawdry, lurid and contorted, pointing in their grotesqueness towards the dehumanisation that has already been symbolised in the boisterous, brutal ‘fun-loving’ rape. But Kubrick typically lures his audiences into metaphysical traps, seducing them into a state of mind which is then revealed to be vacuous or inadequate. 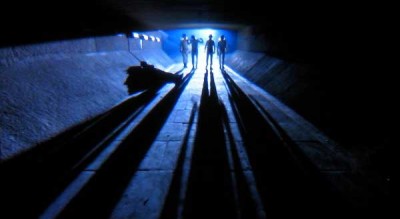 At first we feel like campaigning for capital punishment to cope with hooligans like Alex (Malcolm McDowell), then our sympathies are caused to veer towards Alex as aversion therapy of the most vicious kind is practiced on him by the authorities of this totalitarian society. His eyes are clamped open as scenes of torment are shown to him over and over again while Beethoven’s Ninth Symphony is drummed into his ears. Sexuality is made to seem vile to him and when he leaves prison (cured?) he is also effectively impotent. But there is yet another twist to Kubrick’s manipulation of our emotions, for ultimately it proves more convenient for the authorities to have people like Alex behave like beasts, and he is restored to his original state. 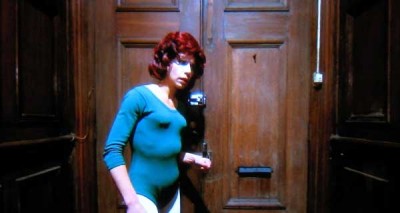 Because Alex is meant to embody our savage anarchic impulses, Kubrick figured the audience would identify with him. So we wouldn’t identify with Alex’s victims, he manipulates us into accepting Alex in relation to the world he lives in. As played by Malcolm McDowell, Alex is energetic, handsome, witty, and more honest, intelligent and interesting than any of the adults in this cruel world. Without exception, Kubrick makes Alex’s victims more obnoxious than they were in the original book, and makes their abuse at Alex’s hands more palatable by making them grotesque, mannered, snobbish figures. Kubrick uses other distancing devices such as extreme wide angles, slow motion, fast motion, surreal backgrounds, and songs that counterpoint the violence. 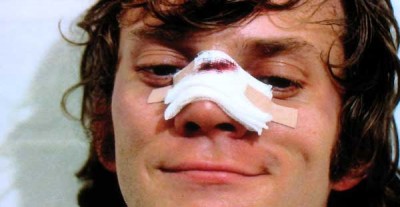 The violence perpetrated by Alex is very stylised, but when it comes time for him to endure violence (a bottle to the face, police brutality, the Ludovico treatment), it is much more realistic. Our hostility is directed at everyone but him as he becomes like an alley cat returned to the streets after being de-clawed. Burgess believed that his book was a parable that expressed two basic points: 1. If we love humankind, we must also love Alex as a representative member of it, and 2. It is preferable to have a world of violence undertaken in full awareness than a world brainwashed to be good or harmless. But the humankind that Kubrick shows us is not worthy of our love and, even before he undergoes the Ludovico treatment, Alex’s violent acts don’t seem to be made through free choice, but are reflexive, conditioned by past violence. He is already a clockwork orange – humanised on the outside, mechanised on the inside.

The film is highly stylised in a way that evokes the warping of an entire society, and not just the protagonists. The bizarre sets were the work of designer John Barry, later shrewdly chosen by George Lucas to design Star Wars IV: A New Hope (1977), which features cultures almost as alien as that which Kubrick presents in A Clockwork Orange, greatly assisted by cinematographer John Alcott. It also features an amazing soundtrack comprised mostly of classical music selections and Moog synthesiser compositions by Walter Carlos (who became Wendy in 1972), although one notable exception is Singin’ In The Rain, chosen because it was a song that actor Malcolm McDowell knew the words to. Carlos first came to note in the late sixties with recordings made on the Moog Synthesiser, then a relatively new and unknown instrument. Most notable were her albums of synthesised Bach and her soundtracks for this film, The Shining (1980), and Tron (1982). A Clockwork Orange also holds the Guinness World Record for being the first film in media history to use the Dolby Sound system.

All of Kubrick’s films seem pessimistically designed to show where humans go wrong. A theologically-inclined critic might even argue that Kubrick’s basic subject is Original Sin, but Kubrick is not without empathy for the sinner, and he often shows us the attraction of the sin – it was one of his favourite ploys. He therefore may not have been the most appropriate director to film Stephen King’s novel The Shining, where the Evil is inherent in a place and the people are its innocent victims. But that’s another story for another time. Please join me next week when I have the opportunity to throw you another bone of contention and harrow you to the marrow with another blood-curdling excursion through the back-streets of Hollywood for…Horror News! Toodles!