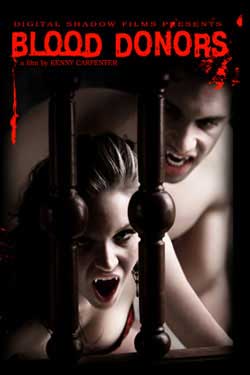 When a stalker becomes a vampire, a loving couple is the target. A path of destruction and crazy mayhem leads to poor martial arts, ridiculous victims, and a clown. Just when you think it’s over, it’s not! Comedy shouldn’t be this horror-ible!

Vampires are a mainstay in the horror movie industry, and the interest of what would happen during a vampire holocaust in present day America sets the stage in Kenny Carpenter’s “Blood Donors.” A jealous ex-boyfriend gets his wish by becoming more than just a lonely stalker, and complete chaos ensues when the ex-boyfriend turns into a blood-thirsty vampire on a road to killing anyone in his path. Plenty of CGI blood and explosions set the stage to a very low budget vampire thriller, which has randomness in numbers keeping the viewer wonder about what is going on exactly.

Dana(Dana Aritonovich) and Boris(Boris) site at a diner discussing vampire flicks, as they are being stared at from across the room by jealous ex-boyfriend, Kalib(Bobby Jones.) Kalib visualizes ripping Boris’s face off from ear to ear, and does not understand why Dana chooses her new man over Kalib. After Kalib leaves, he heads over to the local tavern, where the too friendly bartender (Dina M. Patel) serves him shot after shot. The bartender then comes over behind Kalib, and grants his wish to make him stronger by placing her fangs on his neck. He collapses, and she goes over to drain the passed out drunk of her blood.

Kalib instantly becomes a vampire, and starts his reign of terror in his new look, completed with black sunglasses and a wardrobe of black. He first runs into a clown that speaks in a chipmunk-like voice, which attacks Kalib with exploding balloons. Kalib attacks the clown, and then makes his way to a street fair. He encounters two sword fighters, who he quickly eliminates on his way to the fair’s haunted house. The haunted house is filled with different themed rooms, and each time Kalib enters a room, a sub-titled theme would pop up on the screen. The rooms included: Foggy Hell room, Upside Down room, Dungeon room, Scare room, Red Light room, and Disco room. Kalib easily takes out the workers and patrons of the haunt, and convert them into his vampire minions.

Kalib reaches his target when he runs into Boris on the street. In jealous rage, he beats up Boris and then bites him to convert him into a vampire. Kalib makes his way to his ex-girlfriend’s apartment, and hypnotizes her into sexual intercourse that he had been longing for. When Dana snaps out of her trance, she immediately threatens him with a restraining order, and Kalib puts her back under hypnosis. Kalib bites Dana, proclaiming she would be his queen, and after on the ground shuddering and moaning, Dana becomes a vampire. However, it doesn’t quite work out for Kalib as she decapitates him with her new vampire strength.

Kenny Carpenter’s “Blood Donors” is a low budget vampire flick that fits in to most of the generic stereotypes of a vampire film. Even though the movie is categorized under horror/comedy, the jokes and plot line are far from something we haven’t seen before. This new venture into the vampire movie genre fails to stand out in the overwhelming influx of vampire related media; except if you count the random occurrences