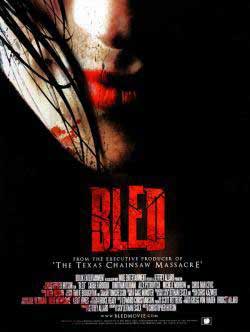 After trying a drug given to her by a mysterious foreigner (Jonathan Oldham), young artist Sai (Sarah Farooqui) enters a dreamlike space and develops a thirst for blood. As Sai’s cravings grow, she unwittingly attracts a dimensional vampire trying to cross over into the real world. A horror film full of blood and lust, Bled co-stars Alex Petrovitch, Chris Ivan Cevic, Michele Morrow and Ivan L. Moody.

Director, Christopher Hutson and writer, Sxv’leithan Essex have done something with their film, Bled, that I didn’t think was even possible anymore: They’ve made a pretty originalvampire movie. The story follows four young artists, Sai (Sarah Farooqui), Royce (Chris Ivan Cevic), Eric (Alex Petrovitch) and Kerra (Michele Morrow) that live together in a downtown Los Angeles warehouse. The film opens at an art show where one of Sai’s friends informs her that there is someone who is interested in purchasing one of her works and has priced it at three thousand dollars. In dark corner of the showroom, she meets the man who wants to buy her painting, creepy art collector, Renfield (Jonathan Oldham). His name, I’m pretty sure, is a nod to the character in Brom Stoker’s classic novel, Dracula. After a conversation about her inspirations, Sai invites Renfield to her loft to see more of her works. During this conversation, Royce stands out of sight and looks on with jealous eyes.

Back at Sai’s place, Renfield suggests she try Strigios, the sap from a rare tree in Eastern Europe that works like a hallucinatory drug to open her mind. He claims that several famous artists in the past have used Strigios to find the inspirations for their masterpieces and that she can benefit from it to unlock her full potential. He informs her that the experience is like a dream, and if the visions become too intense for her, he’ll be able to pull her out of it. Using a knife, he cuts out a part of the crimson hued sap and places it on a spoon. He produces a lighter, “fire purifies all,” he says and then holds the flame under the spoon, instructing her to inhale deeply when the sap begins to burn.

The drug transports her to a dark, surreal forest, where she is being stalked by a hideous looking creature that transforms into the object of her sexual desire, Royce. She then starts to turn her other artists friends on to the drug, also promising to open up their minds, but, instead, she produces rather dire results, as she eventually becomes possessed by the drug’s addictiveness.

The visuals in this movie are simply beautiful. The dream forest where the group, one by one, meet the awaiting succubus is very well designed, teeming with a dark, gothic beauty that isn’t really seen much in films nowadays, and is what many recent vampire flicks are lacking, in my opinion. Personally, when it comes to vampires in cinema, I’m a fan of the Bela Lugosi/Universal Studios Dracula films and was never really impressed by the Anne Rice type blood suckers (Emo Vampires, as I like to call them) that have become popular in recent years. Aside from Let the Right One In, Bled is one of the better new-age vampire films.

The acting is good, but nothing to really drool over, save for Sarah Farooqui, her portrayal of the struggling artist, Sai, is very complex and dynamic. Her performance as a vulnerable young woman was just as impressive and convincing as her performance as a blood sucking creature of the night. The acting was driven by a script that was pretty much solid, except during the last twenty minutes of the film where the events become somewhat jumbled, but this is due to some of the movie’s minor pacing issues. I would recommend Bled to all of the hardcore vampire fans out there, but to the ones who especially enjoy popular television shows such as Buffy the Vampire Slayer, or Angel, because Bled seems to have the same overall style and feel of these shows. The casual horror fan will also get some enjoyment out of this film also.

After finishing the movie, I really had no major complaints, it is certainly worth a viewing, and will more than likely be a hit among vampire fans, and I’m sure that it’ll also relate to the many struggling artists out there, who are always on a search for inspiration and know that these searches can often lead them into the dangerous territory of addiction.