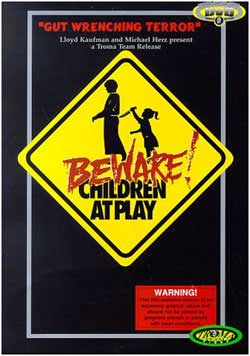 A small New Jersey town settled deep within the Pine Barrens has been having a really bad last couple of years, people have started to come up missing and most of them are children! It’s up to the local sheriff and his friend, a science fiction author, to find out what exactly has been going on.

“These Aren’t Children…They Are Demons!”

There are certain movies that will always have a special place inside of my heart. With all of these movies I am able to go back in time and actually remember the first time that I saw them. Beware: Children at Play came into my hands back in my college years straight from the hands of a fellow film degenerate. When the movie was handed over to me though it came with a warning: “Make sure you watch the entire movie the end is ridiculous!” I took my friends words to heart and took the videotape back home, even the cover had a warning on it….How was this not going to be great! If your idea of great is some pretty shoddy acting, zany characters and some pretty great splatter FX shots than Beware: Children at Play is right up your alley!

The first shot of Beware: Children at Play is almost identical to the final shot and in both shots there is a cuddly bunny that is hopping along in the woods. It doesn’t take long to develop into a series of scenes that involve a father and son on a camping trip. The father and son team seem to be enjoying the things typical of a family camping trip: They go fishing, they sing songs around the fire while roasting marshmallows, and they play a harmless game of monster chasing the kid.

The latter of these games ends in tragedy however when the fathers leg is suddenly caught inside of a bear trap. The father sends his son back to the camp site to get their supplies and assures him that someone will be coming soon to rescue them. Around the fourth of fifth day however things start to get a lot worse for the father and son. The father is starting to seriously lose it in front of his son and he keeps spouting off strange almost poetic things about gulping blood and gobbling flesh, not to mention the wound on his leg is now starting to attract some local insect life. After the father officially looses it and collapses the son then picks up a knife and in a pretty funny FX sequence begins to violently stab his father and then tear organs out of his body.

When the film gets back going we are introduced to a young family who are on a trip to visit a friend of the family. The husband John is an author whose works tend to dwell into the realms of UFO’s and psychics, his wife Julie teaches poetry at the local college. Julie obviously isn’t fond of John’s career choice and brings it up a lot, not that I am sponsoring binge drinking but one could easily make her character the subject of a drinking game! The twosome also come complete with a whiney little ankle biter named Kara.

To make a long story short John and his family are visiting his old friend Russ who is the sheriff of a small town. While on their way to Johns they notice that there is a man having car trouble on the side of the road when they go to pull over however a child suddenly runs in front of their car and is almost creamed in the process. The kid is seriously just random as the driver of the other car claims no ties to him, however he does share some secrets about the town including a story about a group called “the brownies” that went nutzoid and killed a bunch of folks from the city because they thought they were possessed. The random driver is one of the more interesting characters in the film and it really is almost a shame to see him get sliced in half by a scythe.

When John and his family finally get to Russ’s though they find out why Russ has asked John to visit. Russ believes that John’s books are actually completely true and he wants him to help him figure out what has been going on around the small town. The small town has recently been suffering a plague over the last three years that has caused twelve children and four to five adults to have suddenly come up missing.

John at first entertains the idea with Russ, but tries to teach him some actual police work. Russ seriously has to be one of the worst sheriffs in the history of genre cinema, there is one blatant scene where John recognizes the car from the random guy they ran into on the way to town and Russ simply puts it on the back burner stating that they will get to it later. Really that’s about the just of the film for the most part the two wives hang out, the kids hang out and John and Russ try to solve the crime.

The film attempts to slowly reveal to the viewer what has really happened, however the cover art and the films trailer already let the viewer know well ahead of time what is going to happen. When the film finally does start to show this it really does begin to take off.
For the most part the children in the film are hardly frightening; in fact most of them look a little scared of the camera. There is however some creepy scenes involving the children including one where a young girl just stands scratching on a door until the unsuspecting victim opens the door.

If the children won’t get you in this one than the cast of zany characters definitely will. There is a good old farmer, a sleazy bible salesman, an annoying reporter, a shell shocked wife and the dumbest sheriff in the world to keep you entertained. The FX in Beware: Children at Play are pretty low budget and their shock value tends to wear off after the first few viewings, yes for some this film does become a repeat viewing pleasure. There are however some great set ups including the shot of the guy getting cut in half by the scythe. I don’t really want to discuss too much about the FX however since most of them occur in the ending that you definitely have to see to believe!

I say call up some friends and get yourself a copy of this masterpiece and laugh into the night time hours.