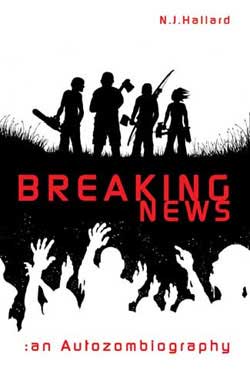 Zombies. Dirty, filthy, rotting corpses lumbering around feasting our brains. They have become pop icons and have spawned countless movies, comic books and novels. It is difficult to find anything on the subject that is unique. Breaking news by N.J. Hallard is one of those few exceptions. For starters the novel takes place in the United Kingdom and follows a husband, wife and several friends as they fight for survival. They are left to survive after the zombie sludge hits the fan and doing so while everyone around them denies zombies are afoot. The friends take hold of an old castle and make it their own foothold against the growing zombie population. As this ragtag group survives rules have to be made and enforced as new survivors want in to what they built.

Breaking News is a fun read with just enough gory details to keep many horror fans chomping at the bit for more. The store levels out but then hits a roller coaster looking its next big twist or turn. The flow of the story and the development of the characters are done sublimely. You get to know a little something about everyone and just enough for you to ask questions and to get attached to them. The voice of the story comes from the perspective of the lead character. This fact wants me wanting to see the story to be less perfect; more mistakes and less flowery writing. This, however, has no bearing on the story as a whole as you easily ignore the after several pages in. You will get hooked early on and stay hooked until the very last page where you will find three little words: to be continued.

After the initial zombie uprising as it were there were moments where the story lagged in places. These were the times where you could begin to get a feel for each character as individuals. This also a place where more zombie attacks, invasions t other to and from other settlements or visuals of the English zombie wasteland could be brought to the foreground.

There are little elements in the style of the novel that are fun for the diehard zombie lover in all of us. The lead male characters are also lovers of zombies. This tiny detail is what propels the story forward as they use the knowledge they have gleamed from Romero films as a basis for their survival. The good thing about this is that it is not done to the point of being silly or redundant. It is there as needed and when it is important. This soon changes as the story progresses and they begin to find their own way in this new world.

Plenty of people in this type of situation would lose control of their senses and go against their nature and that certainly happens in Breaking News. I personally would have liked to see more mental destruction and lack of civility. This would have made the story take an even darker turn but perhaps this can be added to the next installment.

Like with any book you always hope that it will take certain paths that it didn’t but breaking News took most of the ones I would have liked. The gore was not done to excess, the personal relationships were strong and true and the story itself had emotion behind it. You were able to get excited and root for the good guys. I would jump at the chance to make this story in to a movie because it would be captivating in the genre. I do highly recommend Breaking News by N.J. Hallard even if you are not a fan of zombies because it is much more than a zombie story.