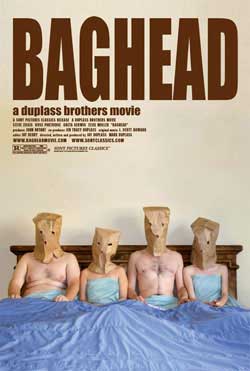 Two screenwriting couples head to a remote cabin in the woods, hoping that the change of scenery will get the creative juices flowing. Amid the solitude, the dynamics of their relationships are revealed as they strive to write their masterworks. Complicating matters though, is the lurking presence of a strange man who wears a bag over his head. Brothers Jay and Mark Duplass wrote and directed this offbeat follow-up to 2005’s The Puffy Chair..

Baghead is not a slasher film. If you want a traditional horror film you should not take the time with this movie. However, if you happen to be a big fan of both indie comedies and horror, this movie bridges the gap nicely. Baghead is part of a film movement known as “mumblecore”, an American independent film movement that arose in the early 2000s. It is primarily characterized by “ultra-low budget production (often employing digital video cameras), focus on personal relationships between twenty-somethings, improvised scripts, and non-professional actors.” (en.wikipedia.org/wiki/Mumblecore).

In this film, the horror elements are secondary to the love quadrilateral between the four main characters all holed up in a cabin in the woods. The movie begins with the four main characters watching an absolutely hilarious spoof of an independent romantic comedy called “We Are Naked” at a local film festival. The Q and A that followed the movie within a movie was equally funny, as our cast tries to keep their mouth shut about the piece of garbage they just watched. Another great scene follows where the leader, Matt (Ross Partridge), tries to get into the after party by walking past the bouncer while talking into a wallet instead of a cell phone, as his friends had done.

After retreating from the after party, our crew gets talking. They start wondering why nothing has happened for their own careers. They can’t be extras for the rest of their lives can they? The stage is set. The gang is going to hole themselves up in a cabin in the woods until a script with parts for the four of them is finished. The gang arrives at the cabin and get down to work while downing beers. That night Michelle (Greta Gerwig) goes outside to vomit and sees a man with bag on his head. The next morning she writes it off as a dream. Matt decides that is the new plot of their movie, four people alone with Baghead. What could be scarier than a guy with a bag over his head, right? During the next nights brainstorming session the “he likes her, but she likes him” of the love quadrilateral comes to the forefront. Michelle secretly invites Matt up to her room.

Matt doesn’t join so as to protect his friendship with Chad (Steve Zissis) who has a huge crush on Michelle. While waiting for Matt, the man with the bag head appears outside Michelle’s window. Each one of them seems to write off the incident as prank from one of the others. Incidents like these continue to occur until Baghead appears with all four characters present. Matt tries to scare Baghead off with a baseball bat, but Baghead pulls a knife. The group hides themselves in the cabin and next morning leave to walk the next eleven miles to the highway to escape the madman (although annoyingly they don’t bring any food or water with them while they prepare to walk 11 miles through the forest to safety). By the same token, the ending isn’t really a surprise and will not please anyone looking for a typical horror film, but that is hardly the point. As I mentioned earlier, this is an indie comedy masquerading as an indie horror.

As I am a big supporter of the dialogue-heavy indie slacker comedy, such as Clerks and SubUrbia, much of the charm of “Mumblecore” for me is the film’s realistic core and its willingness to morph dialogue through the styles of the actors, and their own relationship to the material. This movie was a big improvement over Jay and Steve Duplass’s first film, The Puffy Chair, about a group of slackers trying to retrieve an old recliner to give to one of the character’s father for his birthday. The characters interact with each other realistically and the film lets relationships take center stage. Although the Duplass films are frequently criticized because the female characters are often needy and obnoxious, I felt that Michelle and Catherine (Elise Muller), Matt’s on again off again girlfriend, were handled well. The movie contains no gore, and this fact alone kept the budget under 1000 dollars. I liked the simple costume design of the Baghead Killer. Certainly a simple bag over the head lends itself well to the requirements of inexpensive filming on a digital video camera, but this movie does it with wit, sometimes broad comedy, realistic comedy, and some genuine horror as well.

If you think mixing a slacker comedy with a horror movie is a good idea I recommend this movie.