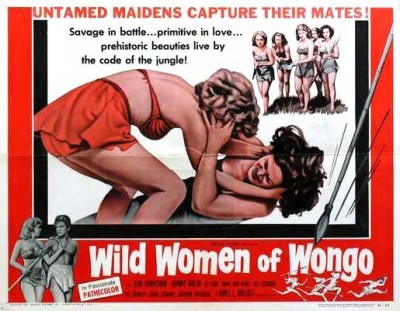 “On the tropical island of Wongo, a tribe of beautiful women discover that the other side of the island is inhabited by a tribe of handsome men. They also discover that a tribe of evil ape men live on the island, too, and the ape men are planning a raid on the tribe in order to capture mates.”

REVIEW:
Hello, good evening and welcome. I’m your host, Nigel Honeybone, loosed from Hell to speak of horrors! Or, to put it another way, this week’s film is bad rubbish and more than a little dopey. It was made on a budget more slender than Vampira’s waistline, and goes by the name The Wild Women Of Wongo (1958). What are the chances of a title like that preceding a high quality film? About as likely as reading a romantic comedy by Tom Clancy.

The Wild Women Of Wongo was made by a cast and crew of unknowns who stayed that way. It was filmed in Florida and set on a tropical island circa 8,000 BC. The occupants are tragically primitive in some ways, yet surprisingly modern in others, which is a generous way of saying ‘anachronisms abound’. What passes for a plot in this movie is really just a silly social engineering experiment conducted by Mother Nature and Father Time. Many people regard these two entities as being very wise, but according to the evidence in this film, they’re both complete idiots, unfit to guide our precious lives or have anything to do with the creation of screenplays.

At least the Wild Women themselves are very watchable. Not for their great acting abilities or for providing profound insights into the human condition, but for reasons that will become apparent. The Wild Women Of Wongo is a film that achieves gender equality, in that both men and women give truly terrible performances. But then, what else could they do with such woeful dialogue? Give nuanced multi-layered performances? Not Pygmalion likely! To describe the characters as one-dimensional seems too generous by at least half a dimension. Not even the parrot gets any good lines. A spokesman for parrots said he was disappointed with the standard of dialogue in this movie, and suggested a change of agent might be in order.

It’s difficult for me to discuss the cast and crew of this piece of…cinema, because most of them never worked again – unless they’ve changed their names – and who would dare reproach them for doing so? The Wild Women Of Wongo simply does not look good on a CV. This is director James Wolcott‘s only film before he returned to the obscurity he should never have left, and the same goes for writer Cedric Rutherford, who seems to have been in hiding ever since. Rumour has it he’s sheltering in a cave of the mountains of Turkmenistan. He’s probably thinking that it’s safe to come out now, but as I’m reviewing this film, I’m also increasing the number of people who will want to punish him.

Jean Hawkshaw as Omoo, Mary Ann Webb as Mona and Cande Gerrard as Ahtee, all vanished without a trace. Adrienne Bourbeau, as Wana, acted in one episode of Flipper and later turned up as assistant director on Empire Of The Ants (1977) and The Funhouse (1981). Joyce Nizzari was Playboy’s Playmate Of The Month in December 1958, and later had bit parts in episodes of McHale’s Navy, Green Acres and Petticoat Junction – as tragic a career path as ever I’ve seen.

As for the men, Ed Fury was a body builder who was in a few sword-and-sandal films in Italy in the early sixties. Steve Klisanin won the title of Mister America in 1955 and Mister Universe the following year. I’m not exactly sure which of the men they portray – telling one tribesman from another is harder than summarising Last Year At Marienbad (1961) – but both Ed and Steve provide early evidence that body-builders should never become actors. It always ends in tears.

Engor, the future king of Goona, is played by Johnny Walsh. He started his career with a bit-part in Boys Town (1938), an unwatchably dated film, later played a delivery boy in Mildred Pierce (1945), and a telegram delivery boy in both Easter Parade (1948) and Father Of The Bride (1950). Wild Women Of Wongo solved his typecasting problem by ending his career, and the silver screen saw no more of him. I’m rather uneasy about the wing of the white bird of peace that Engor carries. A spokesman for white birds of peace said he had grave doubts concerning the truthfulness of the prop man’s claim that no animals were harmed in the making of this film.

What most intrigues me about the citizens of this island in 8,000 BC is, where do they do their shopping? Everyone, even the ape-men wear modern underwear and therefore must shop at the same store. This retailer must also sell shampoo, toothpaste and razor blades. It filled me with joy to see one of humankind’s earliest inventions was the mini-skirt, and I was pleased to see stone-age dentistry was of a very high standard. Let’s now return to the movie to witness more startling insights into human existence in prehistoric times.

By the end of the film, The Wild Women Of Wongo achieve one of history’s first feminist triumphs, but at the cost of endorsing the age-old misconception that ‘Might Makes Right’. They take an unethical advantage of the tribesmen being unarmed, and they unfairly used overwhelming numbers to capture the men two at a time. And whilst Omoo didn’t carry out the death penalty on Ahtee, neither did she repudiate that vile practice. They could not be said to setting a good example for their menfolk. Omoo did defeat that alligator in unarmed one-on-one combat, however a spokesman for alligators has protested the fight was fixed and called for an investigation to be conducted.

The sequence where the girls go nude swimming is where the director makes some heartbreakingly bad decisions. This was no time for long-shots. After displaying such poor judgment, James Wolcott deserved never to work again. There was some compensation during the temple dance, a most memorable scene which some viewers might describe as the film’s high-point. Others might award that honour to the cat-fight between Ahtee and Wana – I’ve seen better: The clash between Marlene Dietrich and Una Merkel in Destry Rides Again (1939) went on for a delightfully long time, its only failing was the participants were overdressed – not something that can be said of the combatants in From Russia With Love (1963) – their contention provides us with truly exquisite cinema. Alas, Wana and Ahtee’s struggle was like their costumes – very short. There’s not much more to be said of so slight a piece of movie-making as this. Please join me next week to discover if the Public Domain has yielded up a work of substance, or a nonsensical bit of fluff for…Horror News! Toodles!